The principal of the Arminai Middle School, (Mrs.) Irena Berentienė, does not cease in her persecution of the believing students, because they attend Church. On November 10, 1976, she called together the parents and the students of the 11th grade. During the meeting, the principal ordered the pupil (Miss) Julia Bušauskaitė to discuss a religious topic. The principal reproached (Miss) Bušauskaitė, that she was the only one brave enough to stand up and to state that: "I go to church and will continue to go to church. I believe and will continue to believe." Even now Bušauskaitė re­affirmed that she attends church. The principal explained that the Soviet schools are separated from the church and Bušauskaitė should keep in mind that she was studying in a Soviet school, and threatened moreover that she would be remembered at examination time. Upon ending her speech, the principal recalled the fact that the girl did not belong to the Communist Youth Organization. The mother of J. Bašauskaitė remarked that because of the Communist Youth, the principal, on more than one occasion was being embarrassed. What possible good example can Communist Youth members give who at night harass passersby?

On November 30, 1976 a funeral procession was passing the Middle School at Arminas, and at the head of the procession a crucifix and banners were visible. Noticing the crucifix, the principal,(Mrs.) 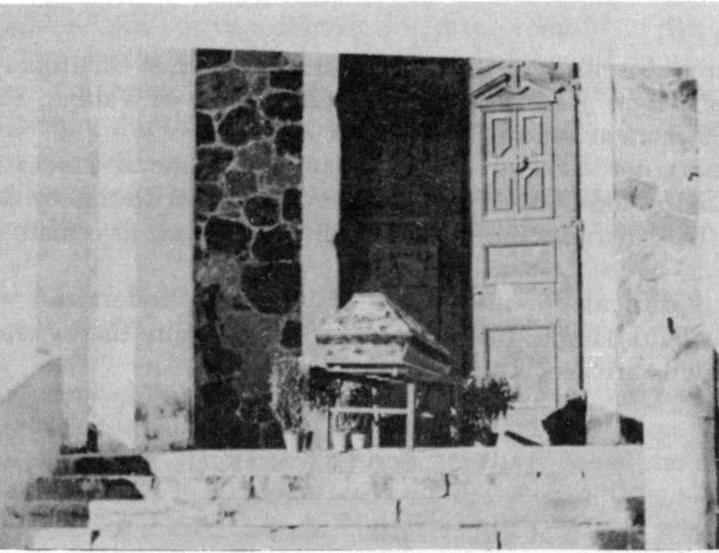 Some local authorities in Lithuania forbid the deceased to be brought into church for funeral services. Here a casket rests outside the church door in Lazdijai, in 1965, while friends and relatives pray inside.

Berentieė glanced around to see if there were any pupils in the procession. At the same time the principal started to explain to the pupils, that if a crucifix is being carried in a funeral proces­sion, they are not allowed to participate in such a funeral. When the 11th grade pupil, A. Bagdonas, wanted to take a picture of the procession, he was forbidden to do so by the principal.

On October 12, 1976 two security agents arrived at the Middle School. One by one pupils who had served at Mass in the Kybartai church were interrogated. The altar boys were asked who invited them to serve Mass and whether the pastor gives them candy, money or books to read. The boys explained that they came voluntarily and that the pastor does not give them anything for serving at Mass. The KGB tried to get some of the altar boys to become agents for them to supply the KGB with various kinds of information.

At the same time the security agents instructed the faculty of the school how to deal with believing students.

On October 19, the Pedagogic Union of Kybartai Middle School held a meeting. The principal of the school, Dirvonskis instructed the home room teachers to make a list of all the believing students and those who served at Mass. The principal stated that on Sundays the teachers themselves must go to church to find out which of these students are attending Mass.

Assistant Principal Sinkevičius told the home room teachers that that they should not give good grades to pupils who attend church, but not to explain the grades on church attendance but on a "lack of social participation".

Immediately after this meeting a campaign started to investigate the religious beliefs of the students. The home room teacher of Class 5-A asked all those who had attended church to rise. Almost the whole class stood up. The teacher took down all the names of the standing pupils.

5-B Class Teacher (Mrs) Palionienė also asked those who had at­tended church or knelt at the altar to rise. She questioned the pupils, whether they go on their own free will or did somebody else force them to go?

The teacher of grade 8 (Mrs.) Zeizienė also asked those pupils to rise who had gone to Church.

6-E and 6-A class teachers Zakas and (Miss) Kazlauskaitė asked their pupils to answer the questions on a questionnaire: Do you go to church, believe in God, etc.

In some of the classrooms the job of taking down the names of the believers was given to the Secretaries of the Communist Youth Organization.

On September 16, 1976, in Class 5 of the Šiauliai Middle School, a teacher, (Miss) Jasiūtė found a prayerbook on one of the pupils and started to make fun of her in various ways: that she is like an old lady carrying a prayerbook. The teacher said she would go down to the church and see if this pupil came.

A little later the teacher Jasiutė called together a conference of parents. The parents were invited to this conference in writing.

They had to state that they would attend, and those who could not had to state the reason. The speaker at this conference was the moder­ator of the atheistic club of the school, (Mrs) Šiupienė. Here are some "highlights" from the lecture: "Children who attend church grow up to be two-faced . . . The government gave a large settlement to the Šiauliai church which was razed by fire . . . There are no candidates for the seminary, except one or two freeloaders etc. . ." The moderator complained that the parents were still taking the children to church with them, and that one atheistic youth upon completing the 11th grade entered the seminary, and that old grand­mothers were teaching the children their prayers . . .

On October 26, 1976 Miss Jasiūtė organized an atheistic hour in her class. The invited Pioneer members from the upper grades told the class that in church being sprinkled with holy water resulted in various diseases.

Jasiūtė inquired of the class at whose homes holy pictures can be found, told them not to go to church, and that if their parents told them to, they should lie that they had a headache or something.

The teacher asked all those to rise who did not have the Little Octobrist's star. More than half the class rose. Miss Jasiūtė threatened that if anyone showed up the next day without the star, they would get a "2" in conduct. "I do not know what I will do to you if you do not wear the star," threatened the fanatical teacher, ending the discussion.

In the beginning of September 1976 at the Obeliai Middle School, Communist Youth members Fleita and Vanagas, angry because they were being constantly persecuted for their religion, tore out of the history textbook the picture of Lenin and, pasting it on a piece of paper, wrote this caption: "Lenin, the greatest enemy of the 20th century."

The KGB charged that most at fault was Fleita and he was dis­missed from the Communist Youth, but Vanagas got off with a reprimand.

A teacher at the Middle School at Obeliai, Jakštas, is known for his great fanaticism in fighting religion. On a Sunday in July of 1976, two boys of Obeliai took a bus to Rokiškiai in order to attend church. The teacher pulled them out of the bus by the scruff of the neck.