On the evening of October 19, 1976, four security agents broke into the apartment of Jonas Matulionis, at Gorkio g. No. 17 b.6.

Two security officers, hidden in the apartment of Matulionis' neighbor, waited for the auspicious moment to break into his apartment without interruption, or causing a disturbance. It seems that another two were waiting in the yard. When Matulionis returned home, and V. Lapienis came to see him, the Security agents forced their way in.

During the search they seized an "Optima" typewriter, The Chronicle of the Catholic Church in Lithuania No. 24, Solzhenyt-sin's Gulag Archipelago (the Lithuanian translation), and other litera­ture. After the search, Matulionis and Lapienis were arrested.

Matulionis, forty-five years old, is a graduate in Lithuanian studies, and later enrolled at the Conservatory, but was expelled for singing in church. He worked in the Library of the Republic, and was later Director of the Art Museum.

Lapienis, born in 1906, an economist, is a graduate of the Uni­versity of Vilnius Department of Economics.

Three days later, Matulionis' apartment was repeatedly searched, especially those areas which were not covered during the first search: the basement and the garret.

On October 26, 1976, a search was carried out at the home of Matulionis' sister (Mrs.) Albina Kibildienė, residing in Kupiškio Rayon, Pelyčių Kaimas (Šimonių Paštas). The search took from 1 P.M. until 2 A.M. the next morning. Matulionis' sister Albina was not home that day, having gone to Vilnius Security to take her brother some food.

She had taken with her the keys to the cupboard. The security agents forced open the doors of the cupboard. During the search they seized J. Petrutis' book, How They Shot Us,a typewriter and some carbon paper, writing paper, and packaging material.

The search was carried out by Prosecutor Matulevičius, and taking part in the search were Party Secretary Žilevičius, of Šimoniai, M. Karnishev and J. Gramkov.

On October 20, 1976, the Security people came to the apart­ment of Vladas Lapienis, at Dauguviečio g. 5, b.ll. Overseeing the search was Major Pilelis, Prosecutor of Very Special Cases, assisted by two other security agents. The search began at noon and ended at 8:30 P.M. Searched were two rooms, the kitchen, the second floor and a utility closet.

During the search they confiscated: Aušra No. 3 (The Dawn), The Chronicle of the Catholic Church in Lithuania No. 23. Solzhenytsin's Gulag Archipelago, Cultural Repression in Lithuania, Solzhenytsin's The First Circle, Gliauda's Simas, The Chronicle of Current Events No. 40, a manuscript, "Michael Suslov, the Hang­man of Lithuania", Advice on How to Act During Interrogation, various typed texts, addresses, a tourist's map of Leningrad, and three typewriters. Most of the articles were found in the bottom of the piano.

On October 23, 1976, Mrs. Lapienien6 went to the Security Committee to pick up the keys to her apartment. At that point, Major Pilelis, Major Urbonas and one other Security officer put Mrs. Lapie-nien6 in a car and drove to her apartment once more, to pick up some things of concern to them. The search began at 11:30 A.M. and ended at 2:30 P.M.

The Security agents declared that Vladas Lapienis had asked for a folder with some documents. During the search they took a folder with documents, 269 polyethylene folders, 3 cartons of typewriter ribbons, 20 kilos of thin paper, carbon paper, etc.

On October 19, 1976, State Security officials in Vilnius arrested two Catholics: Vladas Lapienis and Jonas Matulionis, having first searched their apartments. In the course of the searches, they found the Chronicle of the Catholic Church in Lithuania.

We, priests of Lithuania, feel a moral obligation to declare:

1.       Paragraph No. 19 of the Universal Declaration of Human Rights
proclaims:

"Everyone has the right to freedom of belief and the right to ex­press that belief freely; this right includes the freedom to hold one's convictions without interference and the freedom to seek, to obtain and to distribute information and ideas by whatever means, regardless of national boundaries." This declaration was signed by the government of the Soviet Union.

2.       The persons arrested, V. Lapienis and J. Matulionis, are known to the faithful not only in Vilnius, but throughout Lithuania. They are both deeply believing Catholics and persons of rare moral rectitude, who could not by their nature engage in the dissemination of so-called calumnious inventions. Hence, the efforts of government officials to convict and to sentence these prisoners who are believers will evoke considerable anger from the believing public, and will greatly compromise the Soviet government.

Since both of those arrested are in very poor health, we request you, Mr. Secretary General, to take action as soon as possible to have Lapienis and Matulionis released.

E. Honeker, Chairman of the State Council of the Democratic Republic of (East) Germany, in conferring an award upon you, said that the citizens of the Democratic Republic of Germany were well, acquainted with your tireless activities on behalf of the happiness of the Soviet people. Mr. Secretary General, in ordering the release of these innocent prisoners, you will communicate to us also, that of which Communists abroad are convinced!

N.B. This appeal was sent to the editors of the Chronicle of the Catholic Church in Lithuania by the group of Lithuanian priests, who request their brother Lithuanians in the free world to acquaint the leaders in the Kremlin with the contents of the appeal. Appeals sent by mail always end up in the vaults of the KGB.

Panevėžys. On October 20, 1976, at 3 P.M., a group of Security agents, led by Lt. Col. Petruškevičius, arrived at the offices of the "Linas" agency, where (Miss) Ona Pranckūnaitė was working, and presented an order sanctioned by the Prosecutor, to search the place where she worked, her apartment and storage area.

Taking part in the search as public witnesses were: Virgilijus Dilba, residing in Panevėžys, Respubliko g. 46, bt. 80, Petras Matuze-vičius, residing at Angariečio g. 1, bt. 416, Panevėžys, and (Mrs.) Regina Misevičienė, chief of the cadre section of the "Linas"as-sociation, who did not try to disguise her glee over the search taking place, and over the possible arrest.

The search at work took five hours. In the course of it they con­fiscated: a "Consul" typewriter, sixteen mimeographed copies of the book by A. Griauslys, Šviesa Tamsoje (Light in the Darkness), sixteen copies of Gyvenimo Šaltiniai (Sources of Life), by S. Žilys, and a few pages typed from the book Pamokslai Šiandien (Sermons Today).

Afterwards, Miss Pranckūnaitė was taken to her apartment at Gogolio g. 59, b. 70, where the security agents continued their search, which took until 9:30 P.M. After the search, Miss Pranckūnaitė was driven to Security headquarters for the night, and the door to her apartment was sealed. At the door and outside Security agents stood guard all night.

At 8:30 A.M., the Security people brought Miss Pranckūnaitė back and continued their search. In the course of the search, when they found an electric mimeograph machine, a large group of security people was called out as reinforcements, and three more automobiles arrived.

Seized during the search were: an electrographic copying machine, set up in the bathroom, and operated on the principle of the "Era" machine; about eighty packs of writing paper, a high tension block for the "Era", spare parts for the copying machine, (rulonas dermatino, two spaustuvai), book-binders, knives, a "Consul" type­writer and, two savings account pass-books in the amount of 3400 rubles.

The search ended at 7:30 P.M. During the search, photographs were made. Invited to witness the search were: Petras Matuzevičius, Liudas Daukas, of Algirdo g. 53, b.l, and Specialist Jurgis Kisielius, of Klaipėdos g. 108, b. 22.

After the search, Miss Pranckūnaitė was taken away for inter­rogation. She was asked who brought her the copying machine and the materials. Miss Pranckūnaitė explained that around the middle of June two unknown men asked her to rent them the room, because they wanted to set up an "Era" reproduction machine, with which they were going to reproduce prayer-books, catechisms and religious literature.

She agreed to their repeated requests. The men would come at night and work, and she would just straighten out the room after work.

The interrogators demanded that she tell who had written her the letters confiscated during the search, but Miss Pranckūnaitė refused to reveal the names, since she did not want innocent people pushed around by Security.

The interrogator explained to Miss Pranckūnaitė that at the time, many people had been caught, including Father Sigitas Tamkevi-čius, author of the Chronicle, who had already admitted that in the middle of July he had turned over the latest issues of theChronicle and of The Dawn, and asked that twenty copies of each be made.

Miss Pranckūnaitė asserted that she knew no author of the Chronicle. Then the interrogator let Miss Pranckūnaitė read a spurious confession allegedly made by Father Tamkevičius. The prisoner asserted, "Such things could be admitted only by a person shut up in a psychiatric hospital for half-a-year." 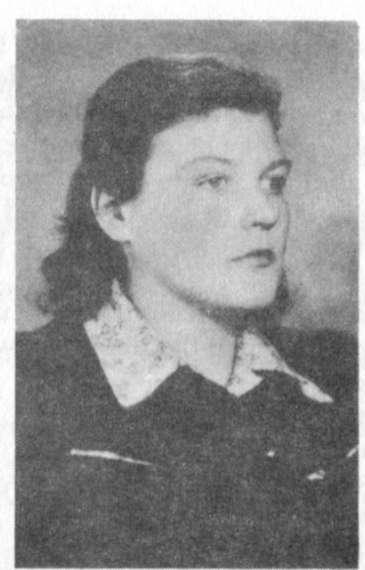 The interrogator remarked that Miss Pranckūnaitė was a nun and that they knew of other nuns, who used to supply her with paper.

The interrogator spared no effort to convince Miss Pranckū­naitė that she was innocent. The real culprits were those men, and she had to tell their names, because otherwise she would lose her furniture and apartment; and she would get eight years in prison, where her health would be wrecked, while those men went on driving around in their Volgas.

"You don't know what Siberia means," the interrogator threatened. The young woman shot back that she knew perfectly well, because twenty-two years earlier, at the age of fifteen, she had written a poem against the Soviet government and had received ten years.

Unable to get anything out of her by gentle means, the inter­rogators called her a prostitute, and threatened to knock her teeth out.

The woman said that it made no difference whether they knocked them out, or whether they fell out in Siberia.

Miss Pranckūnaitė was interrogated October 22 and 23. In­terrogator Petruškevičius reminded her that they would meet more than once in Vilnius.

At the present time, Miss Pranckūnaitė is being held under house arrest. She is allowed to go to work each day, as well as to church and shopping. Everywhere she is carefully followed. Undoubtedly, Security wants to know who her close contacts are.

Miss Pranckūnaite was not paid for the month of October, on the grounds that she engaged in outside work. The chief of the cadre section has been heard to say, "It would have been better if she had stolen half the factory, rather than to have done what she did!"

Miss Pranckūnaitė's first encounter with interrogators was on May 15, 1951. She was fifteen at the time. She was handed ten years for an "anti-Soviet" ditty:

God will show you no pity.

You forced us into communes;

Our children will starve.

In the commune we suffer, Tattered and barefoot. Help us, Mary, For you still live.

For her "care-free youth" Onute can thank Stalin's "sun". She returned to her homeland from labor camp in 1957.

In December, 1976, Miss Pranckūnaite received a summons to come to the Vilnius KGB for interrogation, which lasted three days, (October 7, 8, 9). The Security men reserved a hotel room for her every evening. During the interrogation, the Security agents asked about the books in typescript, about Father Buliauskas, Father Babraus-kas, and others. The interrogator threatened to confiscate her co­operative apartment and her money.

"If you take me in, why should I need an apartment?" asked Miss Pranckūnaite. They further threatened that she would have to spend time in the prison at Panevėžys with prostitutes.