THE CHRONICLE OF THE CATHOLIC CHURCH IN LITHUANIA No. 25

We Thank the Catholics of Ireland

The Trial of Father Jokubauskas

The Struggle Over the Chapel at Slabadai

The Persecution of Algimantas Šalčius

M. Jurevičius Out of Work

News of the Dioceses 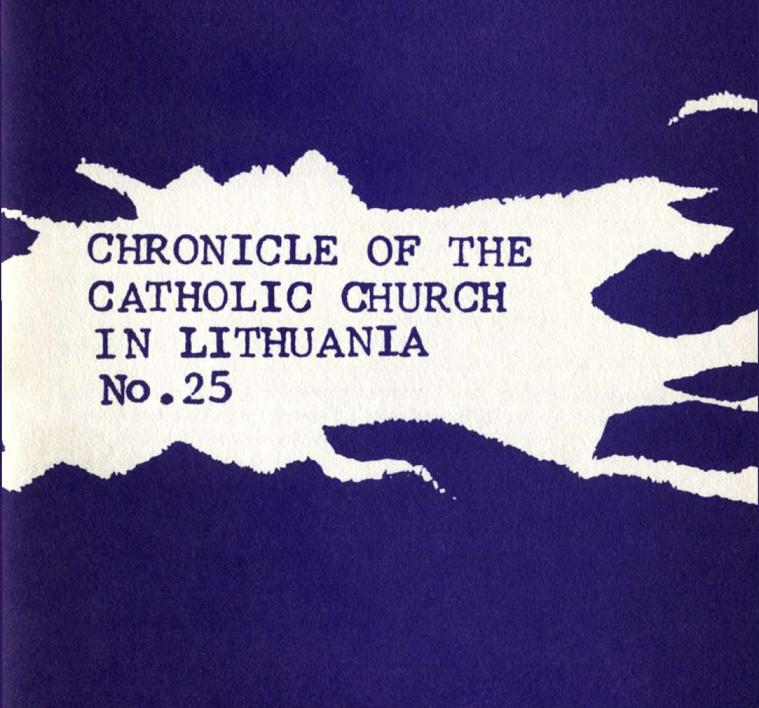 CHRONICLE OF THE CATHOLIC CHURCH IN LITHUANIA No. 25

A Translation of the Complete Lithuanian Original, LIETUVOS KATALIKŲ BAŽNYČIOS KRONIKA No. 25 Documenting the Struggle for Human Rights In Soviet-Occupied Lithuania Today

CHRONICLE OF THE CATHOLIC CHURCH IN LITHUANIA No. 25

The Chronicle of the Catholic Church in Lithuania, No. 25, dated Christmas, 1976, opens with a brief word of thanks to a group of Catholics in Ireland, who had unsuccessfully tried to obtain permission from the Soviet government necessary to bring to Lithuania a statue of Our Lady of Fatima. "The Soviet government was able only to prevent delivery of the gift, but it was powerless to prevent your love and solidarity with the suffering from reaching us."

A new series of raids and arrests is documented, including those of Ona Pranckūnaitė and Vladas Lapienis. A formal complaint by Father Antanas Jokubauskas against harassment by the KGB follows.

This issue of the Chronicle describes in detail the frustrating history of negotiations between the Catholics of Slabadai and the government, over the right of the faithful to worship in their local church, which has been turned into a grain mill.

This is followed by the personal history of Algimantas Šal­tis, who since youth has suffered persecution for his religious beliefs.

The latest developments in the case of Mečislovas Jurevi­čius, suffering job discrimination because of his religious convict­ions, are also described.

Father Juozas Zdebskis is reported to have been falsely accused of driving under the influence of alcohol; hundreds of religious believers come to his defence.

Laborously typed in carbon copies, and passed secretly from hand to hand, theChronicle is ultimately smuggled out to the western world, where it has caused a sensation.

The Chronicle describes the heroic efforts of some 3 million Lithuanians, 85.5% Roman Catholics of the western rite when the country was forcibly annexed by the Soviet Union in 1940, to preserve the faith of their forebears.

Is is a story of six dioceses with no resident bishop and no normal contacts with the outside world, trying to maintain traditional ecclesiastical forms of administration. In reality, all decisions are made by the state-appointed Deputy for Religious Affairs— an atheist.

It is the story of the struggle between clergy who have decided for one reason or another to cooperate with the regime, and stubborn dissident priests and faithful insisting on their rights under the Soviet Constitution, the Universal Declaration of Human Rights, and Natural Law.

In this translation, done in part by Dalia Bulvičius, every effort has been made to remain faithful to the original in every respect, even at the expense of style in some instances. When absolutely necessary, a brief Translator's Note provides background within the text itself.