As government atheists step up their methodical denigration and destruction of religion, the young believers of Lithuania are ex­pressing their loyalty and love for Christ's Cross even more zealously. The youth of Lithuania is well aware of the source of the nation's strength and guarantee of survival and courageously states with the poet Brazdžionis:

"Existing only in the glow of future days,

You learned to live, my enslaved homeland,

For as all great heroes, you have found

During the night of September 25 to 26, 1981, young people erected a beautiful cross on the Vištytis-Kybartai road. At around 10:00 A.M. on the morning of the 26th, District Chairman Sarskas and Romas Žukauskas tore down the cross, but during the evening of the 27th that same cross rose up on the same spot, but stood a mere two hours because evil hands again tore it down. The people adorned the fallen cross with flowers, but this displeased the godless, and on October 18 they cut it into pieces and carted it awav.

On September 27, 1981, a cross appeared near the Vilkaviškis-Žalioji road. At the initiative of rayon religious deputy Urbonas, the cross was cut down on October 6th and carted away. For a long time fresh flowers brought by local residents appeared at the site of the desecrated cross.

On September 22, 1981, in the Prienai pine forest near the Alytus-Prienai road, people noticed a newly-erected wooden cross about three meters high (ten ft.). Not for long did Christ gaze down and offer His benediction from the cross: on the afternoon of September 23rd, drivers using the road noticed uniformed militiamen "working" near the cross. For a while the battered cross and the broken corpus lay along the road, but later disappeared. 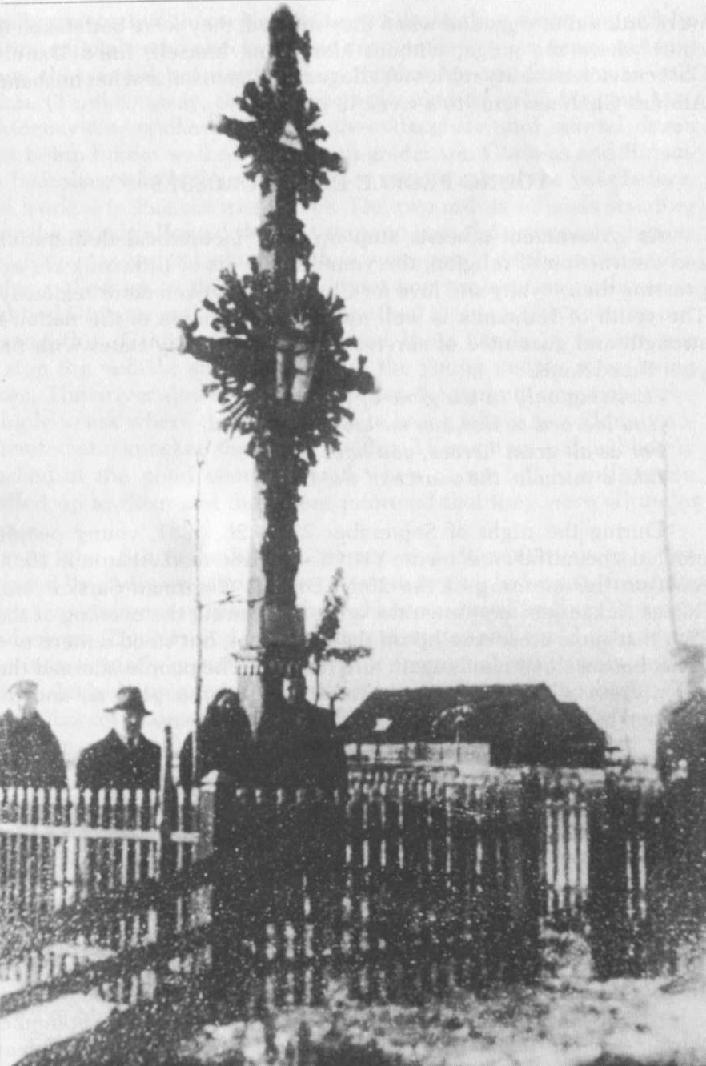 A typical Wyside Shrine in Lithuania.

This is the second desecration of the cross. Nearly a year before, it was erected on the left side of a Garliava-Kaunas road and uprooted the same day. A believer claimed it and after some time it was again erected near the road. The fanatical government atheists smashed and desecrated it a second time, but the love of Christ's cross cannot be eradicated from people's hearts.

On June 3, 1981, an artistic cross bearing the inscription "To the Nation's Martyrs" was erected in the Rainiai woods, the Rayon of Telšiai. A week later, under the direction of chekists, it was felled, cut into pieces and scattered through the woods.

From early spring into late fall, crosses erected by young hands and loving hearts sprouted up throughout Lithuania, evoking the futile rage of government atheists and testifying with every destruction to the anticultural and antinational character of godless-ness. But godless vandalism is powerless to eradicate the Cross from the hearts of young people!