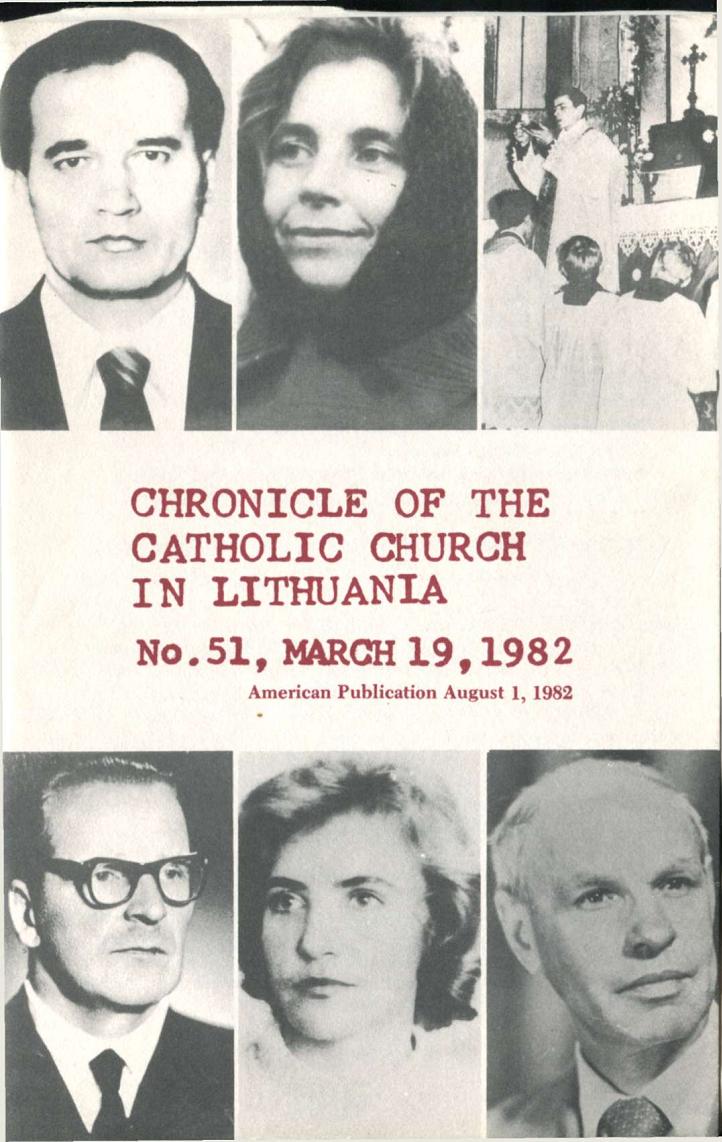 We thank the Lord for this tenth anniversary!

CHRONICLE OF THE CATHOLIC CHURCH IN LITHUANIA No. 51

2. The Spiritual Rebirth of the Catholic Church in Lithuania

3. The CHRONICLE OF THE CATHOLIC CHURCH IN LITHUANIA is 10 Years Old!

4. Letter to the Editors of the CHRONICLE OF THE CATHOLIC CHURCH IN LITHUANIA

7. The Church is "Separate" from the State

To:   His Holiness Pope John-Paul 11. The Vatican.

We, the Catholics of Lithuania, follow with utmost attention over Vatican and other Western radio stations your words, teachings, works and frequent voyages to various continents to bring today's errant world Truth and Love.

We, who have suffered much during the last four decades, are moved by Your Holiness' constant concern for basic human rights, which are trampled here with particular ruthlessness, and we are moved by your amazing love for your homeland.

Because of geographic proximity and similar political circum­stances, we are very familiar with the tragedy of Poland, and we understand it well. Whatever the fate of that nation, it will influence our future efforts and struggle. In Lithuania, the govern­ment atheists who fight against young believers continually repeat: "In Poland also, everything began with the rosary . . ."

Holy Father, from your actions we learn love of God and country. We now have an undisputed, prestigious example that by strug­gling for the rights of God, the Church and our fellow countrymen, we do not undercut our direct mission.

THE SPIRITUAL REBIRTH OF THE CATHOLIC CHURCH IN LITHUANIA

At the conclusion of World War II, the helm of the government of Lithuania was assumed by militant atheists who were determined to wipe out the Catholic Church. Lithuanians who loved God and country were confronted with the question: What will happen next? The priests of Vilkaviškis turned to their old and wise shep­herd, Bishop Karosas, asking advice in the new situation.

"Whatever the government says, do the opposite and all will be well," the bishop replied. It only remained to put his advice into practice. Events unfolded as follows:

1946— the Theological Seminaries in Vilnius, Telšiai and Vilkaviškis were closed. Bishops Teofilius Matulionis and Vincentas Borisevičius were arrested.

1947— Archbishop Mečislovas Reinys of the Archdiocese of Vilnius (later to die in Vladimir Prison) and Telšiai Auxiliary Bishop Pranciškus Ramanauskas were arrested.

A third of Lithuania's priests was sent to the Gulag. Bishop Vincentas Borisevičius was executed in 1947.

1948-49 — convents were closed, many churches were converted into warehouses or used for profane purposes. Lithuanians were deported to Siberia en masse.

Church authorities were compelled to issue uncanonical instruc­tions and to support the Soviet government's deceitful "struggle for peace".

Why did the Chronicle of the Catholic Church in Lithuania appear?

Exactly ten years ago, i.e., on March 19, 1972, the first issue of the Chronicle of the Catholic Church in Lithuania made its appearance. It was a very modest publication, whose purpose was to inform the homeland and the world about discrimination against Lithuania's believers and their efforts to gain a minimum of religioius freedom. Why did it appear in 1972?

Stalinist repressions against the Catholic Church created an atmosphere of passivity among the clergy for a long time. The Church's hierarchy was convinced that "you cannot blow against the wind," and obediently carried out all the demands of the Soviet government, while the party leadership planned a swift liquida­tion of the Church. In the 70's for the least "offense" against secret Soviet government instructions, priests were forbidden to perform their duties; the theological seminary was restricted to such a point that barely five applicants could be admitted per year. The Commissar for Religious Affairs felt he was the "Tsar and God" capable of terrorizing priests and Ordinaries.

At the same time, among priests in Lithuania, more and more the idea grew that you cannot sit with your hands folded until the Soviet government smothers everyone. What was to be done? The answer was provided by the Moscow dissidents who fearlessly seceded with their ideas, statements, books and publications. That was the first peal of the bell of rebirth which awakened many from the lethargy of fear and which shouted: "Enough darkness and sleep! You must fight, you must publicize the crimes of the Soviet government against the Church and other believers: let the whole world see the tyranny; perhaps it will be uncomfortable to com­mit villainy in the light. In 1968 priests began to protest against the restrictions placed on the Kaunas Theological Seminary. The Soviet authorities reacted to the priests' petitions only with repressions: KGB interrogations, removal from pastoral work and even trials. One after another, priests who performed their pastoral duties by instructing children were punished: Father Antanas Šeškevičius, Father Juozas Zdebskis and Father Prosperas Bubnys. These trials were the last and most important impetus to begin publishing an underground publica­tion as soon as possible.

For ten years already you have been performing work which is still difficult to evaluate fully today.

At a time when everyone's lips are sealed, when human rights are trampled, freedoms declared in constitutions and international documents are violated and the victims are cynically ridiculed, during that time of total suppression of freedom of the press and freedom of speech, you dared pierce that sepulchral silence. You dared lift the curtain of deceitful propaganda and document with concrete, undeniable facts what is actually happening in our unfortunate Lithuania. This voice which at first appeared so lone and almost timid, appeared to some an outright hopeless cry for help. At the time some probably remembered the words once spoken to Dr. Vincas Kudirka: "What can you, a lowly bug, accomplish against such power? Such kings, such weapons and strength will crush you like a fly."

However his lone voice did not become silent. On the contrary, everyone soon heard it. It was also heard by those who wished, like the secret police of those times to "crush it like a fly"; it was heard by those whose wrongs it publicized, it was heard by our brethren abroad and through them by the whole world. It was heard because the words, the humble pages carried, like a terrible explosive weapon a powerful force: TRUTH!

To:   First Secretary P. Griškevičius of the Lithuanian SSR

Communist Party Copy to: The Catholic Committee for the Defense of Believers'

We, the young people and believers of Lithuania, draw the Party's attention to brutal, morally reprehensible attacks by Soviet officials against young believers. Such actions have increased con­siderably in recent times.

A group of young believers celebrated the arrival of 1981 at the Rumšiškės Ethnic Museum. Although only bright song came from young lips, and youthful joy burst from innocent hearts, this occasion did not pass without certain consequences. The security police falsely charged the youth with hooliganism and began interrogations. Marytė Vėlyvytė was subjected to special blackmail: she was threatened with expulsion from Mažylis Medical School in Kaunas.

In August, 1981, a group of young believers from Vilnius spent their vacation at Baltųjų Lokajų Lake. On the evening of the 28th, the youth were attacked by a group of militia. Drunken militiamen insulted the girls with unprecedented cynicism and sadism, spat in their faces and threatened to rape them. They brutally threw all the young people into vehicles and took them to the Molė­tai Militia Department. At the militia department, they were held an entire day, occasionally interrogated. Two students, Alfonsas Vinc-lovas and Audronė Ginkutė, were expelled from the Vilnius State University. The young people are still being blackmailed.

What does this new security police maneuver mean? Gemma Jadvyga Stanelytė was convicted in 1979 for organizing a religious procession to Šiluva. 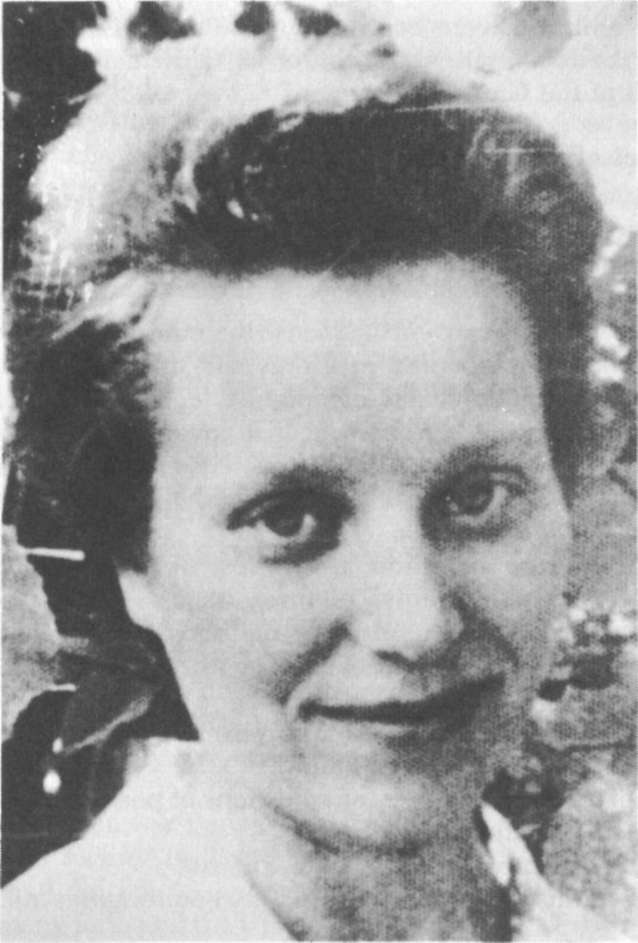 Father Leonas was murdered in the Luokė rectory during the night of October 8, 1980. Only after the free world press began to comment widely about this sadistic crime, did Tiesa (The Truth) print on August 15, 1981, an article entitled "Žudikai suimti" ("Killers Arrested") by Vytautas Zeimantas (special KGB korrespond-ent).

The trial of Father Leonas Šapoka's killers was held in the hall of the Mastis factory in Telšiai on December 2, 3, 4 and 7, 1981. The large hall did not accomodate all who wished to attend the trial; therefore many followed the trial proceedings in the vestibule through loudspeakers. Security agents from Vilnius attentively watched the crowd; there was no shortage of militiamen either.

One day the trial proceedings were recorded on fdm.

Danielius Mockevičius born 1962, Communist Youth League member, caretaker of the Raseiniai Veterinary station, Adonas Lukšas, 30 years of age, common thief. Sabaliauskas and Lukšas were not on trial for the first time. In his speech, Prosecutor Mackevičius wanted to know what had brought them to the prisoners' dock and why they had brutally murdered a man, but he received no answer. He demanded the death penalty for Jonas Sabaliauskas and fifteen years imprison­ment for the other two.