THE PERSECUTION OF JONAS SADŪNAS

In the Chronicle of the Catholic Church in Lithuania, Number 55, it was written that a search had taken place at the home of

Jonas Sadūnas, and, while he was in the hospital, an investigation was begun. Events further transpired as follows.

From November 11, 1982, Jonas Sadūnas was being prepared for an operation to alleviate angina. In the hospital, he wrote to the Chairman of the Lithuanian SSR State Security Committee (KGB) the following petition:

"On October 11, 1982, a search was carried out in my apart­ment at Architektų g. 27-2, in connection with Case Number 57-2-031-81, looking for examples of my handwriting. As a matter of fact, the searchers were interested not in my handwriting, but in letters, addresses, mail receipts, etc. Assistant Prosecutor (Miss) R. Juciūtė was being forced by someone to hurry, and she questioned me even in the hospital. It is very likely that someone wants to get rid of me. Some of the arguments force one to think that it is all the work of the KGB:

"1. The KGB was very displeased by my correspondence with prisoners of conscience and with many people in the West.

"2. On October 22, 1974, after two days of interrogation, KGB agent Vincas Platinskas forced me to go to Simnas, to Father Sigitas Tamkevičius, and tape an interview with the priest. Two KGB agents took me to Alytus and presenting me with a miniature tape recorder, sent me to see Father Sigitas Tamkevičius. Because I did not tape our conversation, Vincas Platinskas became very angry with me.

"At the end of June 1975, Vincas Platinskas summoned me to the KGB Headquarters, and taking me to a safe-house at Cvirkos g. 17, used all sorts of threats to force me to become a KGB collaborator. Very regrettably, I did not have the strength then to repel the pressure and formally agreed to help Vincas Platinskas. Since I never gave the KGB agents any information about anything, it is under­standable why I am now being persecuted.

"I declare to you, Chairman of the Internal Security Committee: "1.   I   firmly refuse to cooperate with the   KGB at any time.

"2. I protest against the fact that I, even though innocent, am being persecuted.

"3. I am ready to be sentenced, remanded to a psychiatric hospital, or to be completely destroyed, but I will never act against my Christian conscience."

The day after the petition had been sent out, at 9:00 AM, Doctor 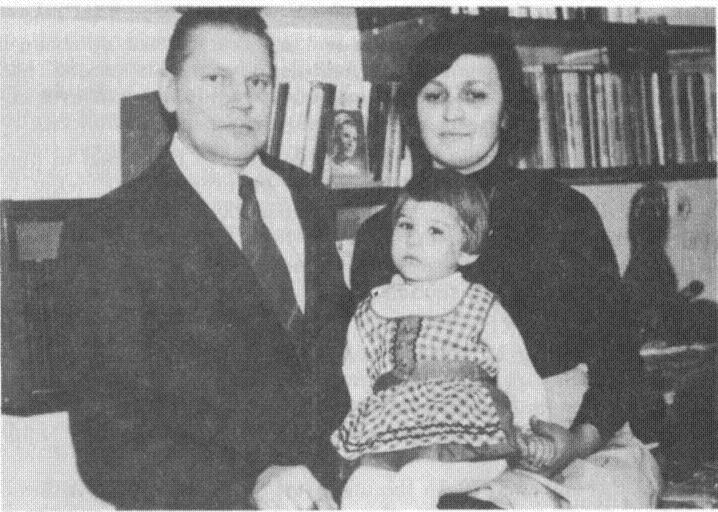 (Mrs.) J. Blažienė, told Sadūnas that he would have to enter the X-ray chamber repeatedly, since he was still suffering from a cough and a temperature of 37.7 C. Fifteen minutes later, Sadūnas was sum­moned by the nurse to go into Dr. Blažienė's office, where he was told that he was being discharged from the hospital and being recom­mended for treatment at the Vilnius V Polyclinic.

At noon, they gave him an excuse from work, and a certification of illness from the Vilnius II Hospital. Sadūnas, taking leave of fellow patients in the ward, was preparing to go, but a nurse coming in asked him to wait because Dr. Blažienė wished to give him a supplementary certificate of illness.

Instead of the certificate, five minutes later, Militia Sergeant Dvilev entered the ward and without a warrent, arrested Sadū­nas. Taking him down and seating him in the car where, along with three militiamen there was another civilian, he showed him a piece of paper with some sort of text, but allowed him to read only (Miss) Juciūtė's signature, and asking whether he was acquainted with her, drove him off to N. Vilnios Psychiatric Hospital VI, the Men's Psychiatric Testing Section. In the section were thirtyfour men under bad conditions. Sadūnas was summoned by Doctor (Mrs.) Regina Ražinskienė She asked whether he had not been a patient in a psychiatric hospital earlier, whether his parents had suffered from psychiatric disorders, and whether he had ever re­ceived a blow to the head.

Sadūnas replied that nothing of the sort had happened to him. Doctor Ražinskienė praised the Soviet government for being so humane: If Sadūnas were to be acknowledged mentally ill, the case against him would be dropped . . . After a month or so, she would tell him whether "treatment" were necessary, and if so, would trans­fer Sadūnas to another section for "treatment". After two or three years, he might be released.

On November 18, 1982, Jonas Sadūnas' wife, Marytė, and his sister, Nijolė Sadūnaitė, wrote expressions of protest to the Prosecutor of the LSSR, with copies to the Catholic Committee for the Defense of Believers' Rights. In her statement to the prosecutor, Nijolė Sadūnaitė writes:

"At the end of 1970, in the offices of the KGB, during an inter­rogation in connection with the case of Father Antanas Šeškevi­čius, KGB Agent Gudas, while warning and threatening me with various penalties, said, among other things, 'It's going to be bad for your brother.'

"After my arrest in 1974, my brother Jonas Sadūnas was pres­sured by KGB agents in all sorts of ways.

"On October 11, 1982, under the direction of a man in civilian clothes who did not give his name, nor sign the report, a search was carried out, not only in my brother's room, but also in mine, even though there was no warrant for the search. The purpose was to accuse my brother of libel.

"Finally, on the 18th, realizing the absurdity of the accusation, the militia took my brother from the hospital where he was being prepared for an angina operation, and placed him in the Naujosios Vilnios Psychiatric Hospital.

"My brother is completely healthy. This can be testified by any­one who has known him, among them, our uncle, the physician Kazimieras Rimkus, citizen of the United States, who visited us this summer with his wife.

"I protest against this terrible arbitrariness, and demand that my brother Jonas Sadūnas be discharged as soon as possible from the Psychiatric Hospital."

At 11:30 AM on November 22, 1982, Jonas Sadūnas was visited in the Psychiatric Hospital by his sister, Nijolė Sadūnaitė. Be­fore they had a chance to talk, Doctor Ražinskienė came running out of her office and began to shout, "Who are you, anyhow? What are you doing speaking with the patients? What do you want here?" (Miss) Sadūnaitė explained that she was Sadūnas' sister and had the right to visit her brother. Doctor Ražinskienė fell into hysteria, began to put on airs, to become sarcastic, to stick out her tongue, and afterwards, she began to shout, "Get out of here immediately, or I'll call the militia and they will throw you out!"

Nijolė Sadūnaitė left. That same day, she wrote the Prosecutor of the LSSR a petition in which, describing how Dr. Ražinskienė had without reason ordered her from the hospital, she asks: "Who gave Doctor Ražinskienė the right to forbid me to visit my brother, and to shout at me in front of everyone there? Please punish those who break Soviet law and order and please release Jonas Sadunas as soon as possible from the psychiatric hospital."

To the November 22, 1982 petition of Nijolė Sadūnaitė, Third Class State Consultant to the Prosecutor's Office of the Lithuanian SSR A. Kiriyenka responded:

"In response to your statement of November 22, 1982, I wish to inform you that for your brother, Jonas Sadūnas, on trial in a criminal case on the basis of Par. 132 lid of the Lithuanian SSR Criminal Code, by order of the Vilnius Rayon Prosecutor's Office, an expert examination has been ordered, to be carried out at the N. Vilnios Psychiatric Hospital."

After ordering Nijolė Sadūnaitė from the hospital, Doctor Ražins­kiene stated to her brother Jonas Sadūnas that a KGB agent and two militiamen had helped her to write the report that Nijolė Sadū­naite had insulted her and was now going to get at least a year in prison camp.

After November 22, militiamen looked for Nijolė Sadūnaitė at the home of (Miss) Bronė Kibickaitė (Vilnius Tiesos g. 11-38) three times, and a KGB agent once, but they never found her.

November 23, 1982, Nijolė Sadūnaitė, in a petition to the Minister for Health Care, writes among other things: "If it were not for the white coat which Doctor Ražinskienė was wearing, I would have thought that it was an aggressive psychiatric patient. After I had left, Doctor Ražinskienė began to interrogate my brother, 'Are you

Catholic? Why did you write greetings to the bishop?' Since when is it considered a crime in the Soviet Union to believe and at holiday time, to greet clergy?"

In November, 1982, Jonas Sadūnas was discharged from the hospital and declared healthy. Investigator Juciūtė of the Prosecu­tor's Office, without regard for the fact that Jonas Sadūnas had an excuse slip from work and was taking treatment, nevertheless sent invitations to present himself to the Prosecutor's Office for inter­rogation. The case is continued.