THE ARREST OF FATHER ALFONSAS SVARINSKAS

On January 25, 1982, Deputy Chief Miniotas of the Raseiniai Traffic Pol ice summoned Father Alfonsas Svarinskas to come in on January 26 in connection with an accident which had occurred in the fall ( a moose had jumped onto his car as he was driving down the highway).

On January 26, just as the pastor returned from a funeral at about half-past-two, a phone call came from Raseiniai demanding that he come immediately. The matter was supposed to be brief. Leaving his parishioners to discuss the funeral. Father Svarinskas left quickly for the Traffic Police without eating, promising to return immediately.

In this deceptive manner they arrested Father Svarinskas after he had been summoned to the Raseiniai Traffic Police: hungry, without money and without the most basic clothing or articles.

That same day, after evening services, two militiamen stopped some guest clergy on the way back from church, demanding to see their papers. They told Father Jonas Boruta to come to Militia Headquarters at Raseiniai the next day at 3:00 P.M., and left their telephone number (Father Boruta, born in 1934, graduated from the University of Vilnius in 1970, and worked as a Junior Research Fellow in the atomic theory section of the Academy of Sciences Institute of Physics. In 1982, he defended his doctoral dis­sertation in physics and mathematics; after completing seminary studies by correspondence, from December, 1982 to January, 1983 [one month], he worked as associate pastor of the Catholic parish in Grečioniai, Region of Chmelnick, Ukraine.)

Learning of this, the parishioners immediately called a telephone number which had been left them, and inquired where they should come, since about twenty of them were going to accompany the priest. 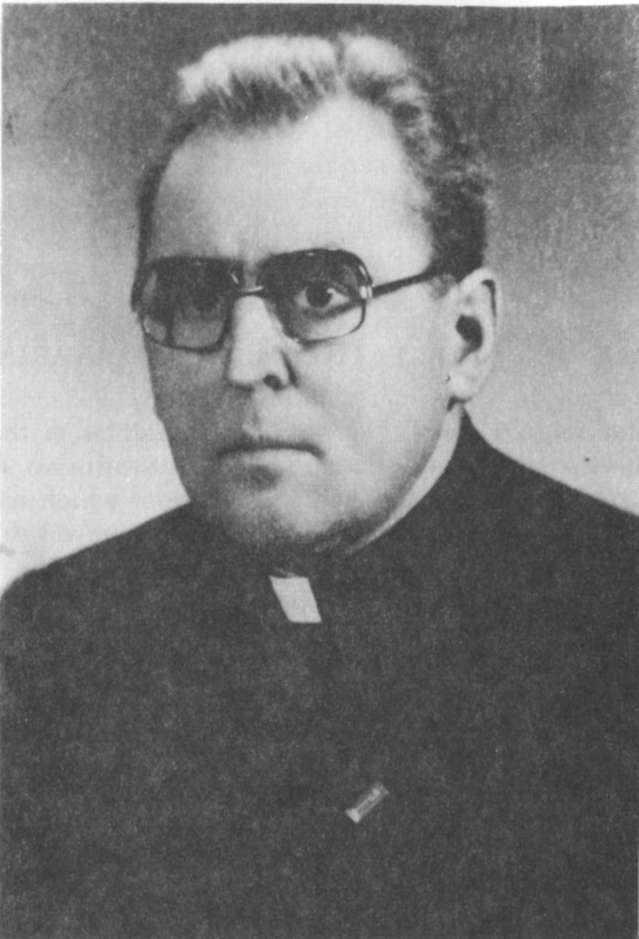 come since about twenty of them were going to go with the priest. Apparently, afraid of disturbances, the militia said that they knew nothing and gave other telephone numbers until finally someone said that it was unnecessary to come. But the next day, at about 6:00 PM, the militia came to the rectory and ordered Father Boruta to leave Viduklė within three hours.

That day, more militia arrived in Viduklė and soldiers were even brought to the nearby woods. People said that the govern­ment feared an insurrection. In the firehouse across from the church, and in the House of Culture, right next to the rectory, disguised security agents sat at the windows.

At 9:00 PM, on the way back from evening devotions (in those days people used to pray longer in church), militia lay in ambush for the priests; however, seeing how many people had accompanied the priests to the rectory and remained, they departed without accomplishing anything. In this way, the parishioners protected the guest priest for two days and two nights.

The arrest of the pastor shocked the parish of Viduklė, and they began to gather signatures on a written protest. The atheists began calling meetings everywhere, while in school, teachers said that no one should sign protests. Some teachers even ordered such lists to be torn up.

The faithful of Viduklė, in their protest to the Prosecutor of the LSSR, write:

"We the faithful of the parish of Viduklė wish to express our protest of the arrest of our pastor, Father Alfonsas Svarinskas, and accusations against him of anti-Constitutional, anti-state activities. We have heard his sermons. Our pastor always used to emphasize that keeping the principles of the Constitution will guarantee freedom of conscience for believers.

"Never has our pastor urged anyone to deride the government or to impair the public welfare. On the contrary, he has always struggled against the moral vices rampant among us, thus doing much for the good of all, not just the faithful. . .

"All of us parishioners are very grateful to our pastor for his conscientious work and sacrifice . . .

"We strongly protest the unjust arrest of our pastor, Father Alfonsas Svarinskas and demand that he be released."

The petition is signed by 1326 believers.

On Sunday, January 30, a half hour before the main Mass, all the bells of the church of Viduklė tolled mournfully, announcing to the parish that it had lost its shepherd, who had loved them so faithfully and defended them so staunchly against atheistic blackmail and persecution.

In church, the hanging mourning ribbons constantly remind the faithful that their pastor's words about the love of God and country were not empty: He has left for the third time on the prisoner's thorny road. Before the principal Mass, young people dressed in surplices and folk costume and parishioners went on their knees from the front door of the church to the main altar in solidarity with their pastor going his way of sorrows, and praying for help from the Lord for the struggling and suffering Church. During sermon time, the priests spoke beautifully about the meaning of Father Svarinskas' sacrifice, urging the people never to tire of praying for their pastor.

After the main Mass, the priests and all the people recited the prayer "Remember, O Most Blessed Virgin Mary", with upraised hands. A forest of hands rose toward heaven praying for God's help and the Virgin Mary's intercession.

On February 1, it was learned that Father Svarinskas was being held in the isolation prison of the Security Committee (KGB). He was given five kg. of food (his ration for one month).

(Miss) Monika Gavėnaitė, the housekeeper at the Viduklė rectory, was summoned to the Vilnius Prosecutor's Office for questioning as a witness. Investigator Bičkauskas first accused her of organizing a collection of signatures. Afterwards, she was questioned about Father Svarinskas personally: What kind of sermons he preached, whether the people loved the pastor, whether she had not written documents of the Catholic Committee for the Defense of Believers' Rights, where they were sent, what the Committee had been organ­ized for, etc.

(Miss) Gavėnaitė described the pastor as a conscientious, zealous, saintly and dedicated priest, but she said nothing about activities of the Catholic Committee for the Defense of Believers' Rights, for the KGB is well aware of everything, since the Committee works publicly.

Nor was the school to be outdone. Two pupils, the sisters Jūratė Kaplanaitė and Asta Kaplanaitė were interrogated by a KGB agent in the principal's office. He threatened the girls, saying that the church would be closed; he demanded that they not pray publicly for such intentions as "the enemies of the Church", "our martyr pastor", since this hurts the atheists' feelings.

All of the retireees were summoned to Viduklė District Head­quarters where the atheists tried to show that the pastor had been arrested justly. In school, they explained to the children that the pastor had murdered people, had belonged to mobs, etc. Wherever there is any gathering of people, the atheists conduct a smear campaign against Father Svarinskas.

In the Rayon newspapers, articles appeared libeling Father Svarinskas. In the Raseiniai Rayon newspaper, Naujas Rytas (New Morning), three articles were published. In one article, the teachers of Raseiniai Middle School II complain that Father Svarinskas has "led youth astray", interfering with the school in its task of educating the younger generation in a spirit of atheism, and sup­port the Republic Prosecutor General's Office, which has removed such a man from society.

In another article, the teachers and parents of Ariogala agree with the decision of the Prosecutor's Office. Most likely, there will be more such people "agreeing" and slavishly kissing the oc­cupant's foot.

Throughout Lithuania, prayers are being said and signatures are being collected demanding freedom for Father Svarinskas.

The priests and faithful of Lithuania, especially those of Viduk­lė, were comforted and encouraged by the letter of Cardinal Josyf Slipyj in which the prince of the Church writes:

"The circumstances and reasons for the arrest of Father Alfonsas Svarinskas are not known, but one thing is certain: This dedicated priest, loyal to the Church of Christ and the gospel of Christ, has committed no crime, neither against the state nor against the law. The only offense which can be ascribed to him by those who are prejudiced is love of God and people, service of neighbor, and the carrying out of Christ's command to preach the gospel throughout the world. What is Father Svarinskas being punished for?" asks Cardinal Slipyj.

"Twenty years ago, we used to meet often with Father Sva­rinskas. We were both bearing the harness of prisoners in the "kator­ga", (penal labor — Trans. Note) when we were arrested and sentenced to strict regime camp, we both bore the same cross of suf­fering, humilation and terror. Father Svarinskas was very patient and loyal like Titus to whom the Apostle Paul wrote. From him I experi­enced much comfort, strength and sustinence. Father Svarinskas is the pride and glory of the Catholic Church in Lithuania and of the Lithuanian nation.

"The news of his arrest and his impending sentence is very pain­ful," writes Cardinal Slipyj, "but it reminds us of Christ's apostles. When the apostles were arrested and scourged, they left the council rejoicing that in Jesus' name they had earned opprobrium, For this arrest we express our deepest sympathy to Father Sva­rinskas and to the Lithuanian nation which is losing a zealous priest, but at the same time, praise be to God that He has granted this courageous Confessor and the Faith the grace of wit­nessing Jesus Christ the Redeemer in the chains of oppression. The voice of confessors bound by the chains of oppression is very powerful, when they proclaim freedom and truth in Jesus Christ... May the merciful Lord lead Father Svarinskas along his way of suffering. May our prayer obtain for him strength and comfort. I wish you the blessings of the Lord."

Dear Cardinal, that in this hour so difficult for us, the faithful of Lithuania, you are with us in heart and with our suffering brother, Father Alfonsas Svarinskas.

Father Alfonsas Svarinskas is described by his parishioners in Viduklė:

"Father Alfonsas Svarinskas has been working in our parish since August, 1976. Observing him, I became convinced that there can be no better priest. He always used to tell us to pray much, to love Christ and to be good children of Lithuania. He used to tell children and teenagers to obey their parents and teachers and to study well. At the end of his sermons, he used to tell us to pray for peace, the elderly and those in Blinstrubiškė.

"For funerals he never took a kopek; he used to bury all the dead of the parish free of charge. To those who were not so well off, he would offer financial assistance. Father Svarinskas renovated our parish church, repaired the paths, gardens and en­virons. Such a priest is an example to all other priests. Our pastor campaigned especially against the use of alcohol at funerals and anniversaries. He used to say that when there is joy, you are able to rejoice, but now, it is sad and we must mourn."