THE PROBLEM OF THE CARDINAL

No one in Lithuania has failed to react to the news about the appointment of the new cardinal for the Catholic Church in Latvia. Everyone has been engaged in lively discussion of what it means.

The Catholic Church in Latvia is moribund: Children are not being given religious instruction, there are almost no young people in the churches, and there are almost no native candidates for the seminary, so that the quota set by the government is filled with candidates from Byelorussia, Ukraine and even Kazakhstan. Even though officially the Riga Seminary prepares priests for the entire Soviet Union, this year only one seminarian, it seems, was ordained to the priesthood.

Among the Latvian clergy, there is a prevailing passivity, fear and reconciliation with the idea that the Church in the Soviet Union can survive only be keeping the Regulations for Religious As­sociations. There is a similar idea in the completely subjugated Russian Orthodox Church.

In Lithuania, meanwhile, children receive catechetics, instruc­tion, participate actively in religious ceremonies, increasingly more young people are seen in church, many people are actively engaged in apostolic work, and bravely go to prison for their faith; e.g., (Mrs.) Jadvyga Bieliauskienė, imprisoned in 1982 for carrying out an apostolate among the high school students of Garliava. (See Chronicle No. 55 — Trans. Note) The priests of Lithuania are success­fully defending their independence of the Regulations for Reli­gious Associations.

Statements that the new cardinal may be a bridge between Moscow and the Vatican shed little light in the present darkness. Speculation that the exiled Bishop Julijonas Steponavičius may be the cardinal in pectore is of very little comfort to the faithful and priests of Lithuania, especially since letters from Lithuanian priests in Rome indicate that somebody has defamed this honor­able bishop-in-exile in the Vatican.

After the appointment of a cardinal for the Catholic Church in Latvia, the exiled Bishop Julijonas Steponavičius received some very angry anonymous letters. One of them writes:

"So-called Cardinal in pectore: So you bless the activities of the Svarinskases, Tamkevičiuses, Keinas, Zdebskises (Priest-Charter members of the Catholic Committee for the Defense of Believers' Rights — Trans. Note) and dividers of the Church like them. So the Holy See has rewarded your little activities and those of the 'activists' in such a way that it was not Catholic Lithuania, but Protestant Latvia which received a cardinal, and one other bishop."

The anonymous note was signed by "a confrere expressing the opinion of most priests", who probably has the epaulettes of a KGB officer. Another anonymous letter urges the Pope, the bishops and priests to pray "that the Evil One would not work to the detriment of the Church through Bishop Steponavičius".

Vile anonymous letters, born in the offices of the KGB, were received also by Fathers Alfonsas Svarinskas and Algimantas Keina. 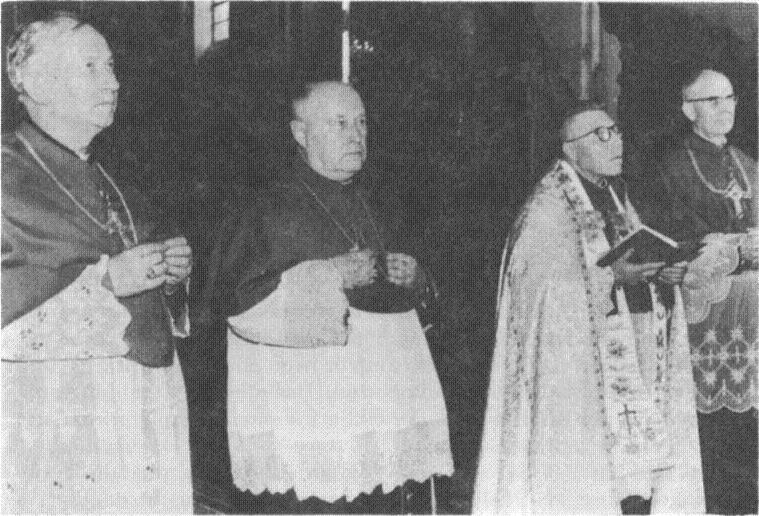 From left to right:

The priests of Lithuania are amazed, not by the anonymous letters (even though they are often interesting in that they give an in­sight into what the KGB is thinking about this or that issue), but by letters reaching Lithuania from some Lithuanian priests in Rome. In one of them, Bishop Julijonas Steponavičius and "activist priests" are blamed for the fact that the Pope appointed a cardinal, not for Lithuania but for Latvia.

How to explain this unfortunate coincidence: That the KGB in Lithuania and some priests in Rome are saying the same thing? The answer is just this: The KGB has masterfully disinformed at least some influential Lithuanian priests in Rome, and by the same token, the Apostolic See. It is just fortunate that the Holy Father did not give Lithuania as cardinal someone taking a passive and conformist position. For this decision of the Apostolic See, the priests and faithful of Lithuania are truly grateful.

That the Apostolic See has been misled by the KGB is witnessed by the following fact: The Washington Archdiocesan weekly printed an article by a Father Doyle in which he wonders why a cardinal was appointed for Latvia and not for Lithuania. In the article, he bases himself on trustworthy information received from Lithuania by Msgr. Ladas Tulaba, which has it that Moscow has announced that if Bishop Steponavičius is publicly elevated to cardinal, the Vatican would be faced with a difficult decision, since Moscow would demand that he be exiled to a labor camp in Siberia or would force him to leave for the Vatican, from where he would never be able to return to Lithuania.

This announcement by Moscow is just plain blackmail by the KGB to prevent the Apostolic See from appointing a good cardinal for Lithuania (A cardinal would never be sent to labor camp!). If a good cardinal had been appointed for Lithuania, then no matter where he was — in labor camp or in Rome — priests and faithful would be morally supported. Unfortunately, in Lithuania today only the KGB is rejoicing while the most zealous priests and laity feel left "entirely alone".

The KGB has suborned some of the priests and they are lashed on to do, write and say whatever the Soviet government wants. They are the greatest destroyers of priestly unity. It is possible that they are the ones who mostly disinform the Vatican while the true voice of the Church in Lithuania is silent, rarely reaching the Apostolic See, and discredited by KGB collaborators.

In this difficult hour for the Catholic Church in Lithuania, when the most zealous priests are being arrested and their zeal seems not to be appreciated, it is important for the priests and faithful of Lithuania not to become confused but to continue their pristine respect for and loyalty to the Apostolic See. Providence itself will see that true loyalty triumphs. The Christian triumph always begins with the cross.

Lithuanian, do not forget!

who bear the shackles of captivity so that you might live and believe in freedom!