Christ, speaking of the Church and of persecutions befalling her children has uttered these words, "For false Christs and false prophets will arise and produce signs and portents to deceive the elect, if that were possible. You therefore must be on your guard. I have forewarned you of everything." (Mark 17,22-23)

At difficult periods in the history of the Church, it is worth meditating often on these words of Jesus, against the background of everyday events. Recalling these words, let us try to consider one or the other event from our times, especially those which bring more disquiet to the heart of a believing Lithuanian.

It is said that the atheistic government has a special division for spreading deliberate disinformation and rumors. The bigger and more significant the fish hooked on their disinformation, the greater the pleasure of the Church's enemies.

Rel igiously believing Lithuania is disturbed about the arrested priests and about the re-arrest of Father Jonas-Kąstytis Matulionis, who had enjoyed a scant few days of freedom. The Commissioner for Religious Affairs, Petras Anilionis, tried to convince the priests and bishops of Lithuania that the blame for Father Matulionis' arrest lies with extremist priests, who incited Father Matulionis, and likewise with himself, for preaching too zealously.

That is a lie! This disinformation is being widely disseminated in Lithuania. As a matter of fact, Father Matulionis did not preach either in Vilnius or in Kybartai. He merely read a completely religious poem of his, and to the people who greeted him, he said just a few sentences. In Kybartai, he briefly said, "If people loved God, the camps would be empty! It was terrible once to hear someone cursing his native land: 'That damned Soviet Union!

This sentence, taken out of context, Anilionis used to justify inhumane treatment of Father Matulionis, an invalid. The government's very attitude shows that the truth lies not with the Commissioner, for there was no new trial for the arrested priest. Father Matulionis was sent without another trial to serve a sentence from which he had been amnestied. Only this time, he was sent further, to Siberia itself: Trans-Baikhal, territory of Chita.

It does not come as news that the collaborators of the atheists are trying to accuse our most zealous priests, called "extremists" by the atheists, of wrecking the unity of the Church, of disregarding ecclesiastical discipline, and even of opposing the bishops, especially when they attempt to direct the attention of clergy in high ecclesiastical posts to the deceitfulness of atheistic disinformation. Is it, however, not strange that it is B. Deksnys (Ateizmas, religija ir ideologins kova, Vilnius, 1985, pp. 103-105), propagandist for atheism fighting against the Faith, beginning to worry openly about this so-called Church "unity"?

This concern is not beneficial to the Church. What kind of unity do the atheists want in the Church? To the detriment of the Church, the atheists were successful in influencing some people by threats and 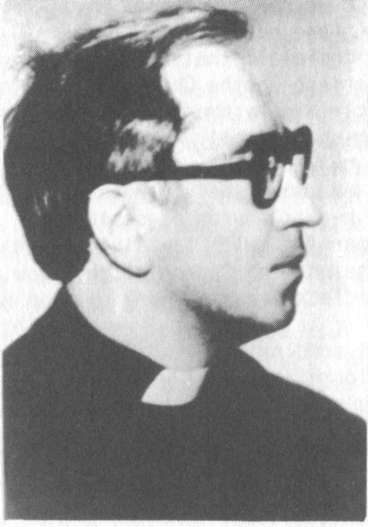 promises to cooperate with them. Others, more zealous, seeing the Church persecuted, and God ridiculed, are trying to improve the situation, to influence others not to give in to the demands of the atheists. These are the greatest disrupters of "unity".

And then, the government atheists cry, "There is no unity!", understanding that "unity", not as unity with Christ and with the Holy Father, but with those who have given up and submitted to the dictates of the KGB.

The government atheists are constantly trying to convince the world and our people that they do not interfere in the Church's canonical activity. In some diocese or other which has lost its Ordinary, an administrator is elected and efforts are made to convince everyone that the elections are free and canonical, that there was no interference on the part of the civil government in their carrying-out and results.

Yet here is the atheist VI. Balkevičius in the magazine švyturys (Beacon), (no. 12, p. 10), attacking Father Jonas Danyla and unabashedly claiming that the atheistic government not only has the right but even the duty of interfering in the election of diocesan administrators. Allegedly, even in independent Lithuania, the concordat allowed it.

However, Balkevičius was mistaken: The concordat required that the Vatican, in appointing a residential bishop, consult with the civil government to see whether the latter had anything political against the candidate. Never did candidates to the post of apostolic administrator   or to the office of auxiliary bishop, even less those to the post of diocesan administrator, have to be cleared with the civil government.

With his mendacious and demogogic sophisms, this atheist clearly shows the low value of the claim that the atheistic civil government in Lithuania does not interfere in the Church's canonical activity.

Officials of the civil government terrorize sisters of the religious communities functioning unofficially, arguing: "You can be nuns. Pray all you want, but just let us know what your superiors are telling you to do, what priests visit you and what they talk about. In this way you will not transgress the laws of either Church or state!"

However, such cooperation wi th the atheists struggling against the Church is an offense against the Church's Canon Law, which requires that the affairs of the religious order or congregation not be carried beyond the Communi ty.

It is painful that some priests and even pulpits are being used to spread atheistic disinformation. This year, the director of the retreat conducted for the priests of Vilnius tried to convince them that the Vatican had condemned Liberation Theology, and so had condemned the defense of the rights of the Church and of the faithful, that is, that activity which was engaged in by our priest-prisoners Alfonsas Svarinskas and Sigitas Tamkevičius.

We are grateful to Vatican Radio for dispelling the cloud of atheistic disinformation by transmitting segments of the lecture by Msgr. Vytautas Kazlauskas on this topic. From the broadcast, it became clear that what was condemned was not the struggle and activity for rights and freedoms, but subservience to atheistic-Marxist doctrine.

Uneasiness is caused by the instructions of some "shrewd" priests accomodating themselves to the atheistic government, given to the faithful (even from the pulpit), how shrewdly it is possible to answer the question on atheistic questionnaires: "Do you believe in God?"

Allegedly, it is possible to answer, "I do not believe in superstitions," even though in Lithuania today everyone knows that the term "superstitions" is intended by the atheists in the first place to descr ibe religion.

These individuals too smart for their own good should be reminded how Bishop Motiejus Valančius used to instruct our people in the difficult times of the Czarist oppression:

"You must be prepared to undergo suffering like the Catholics of old, even though our rulers would take our life for the firmness of Catholics in their Faith, put them in prison, scourge them or even hack them in pieces. All those things they should bear with because the Kingdon of Heaven is worth it. Your souls are worth suffering a little for their redemption; therefore, my children, do not be afraid to give up your homes, your property and even your lives. Adhere, my children, adhere to your faith, even though they kill all of you..."

How painful it is to hear that in an effort to avoid sufferings much smaller than those which Bishop Motiejus Valančius mentions, we are urged to "shrewdly" betray our Faith. The believer should not be fooled even in this situation. The Church did not fall, even though one of   the   apostles chosen by Jesus Himself went the way of betrayal. It is sad when our faithful, lacking serious religious reading material, begin to be fed by Father Bronius Bulika, from the translation of the First Edition of the Dutch Catechism, condemned by the Church. It is good at least that the clergy and faithful reacted firmly.

The faithful of Lithuania were not surprised by the open letter of Father Rokas Puzonas, refusing to cooperate with the KGB. Our people are not so naive as not to know by what methods the KGB operates. The only surprise is the attitude of some priests and faithful toward this honest gesture, especially when the Tightness of this gesture is witnessed by a quite different event: One quite famous priest also chained by the KGB quietly broke off ties with them, but not daring to announce it publicly, he was later broken by the KGB and went so far in his efforts to seek a solution as to abandon the priesthood.

It is strange that not only in Lithuania but in the Vatican that rumors are being spread that Father Puzonas will go the way of the other man who abandoned his priesthood. Why condemn and prophesy in advance? Time will tell! No one is immune from stumbling, "Let him who stands take care lest he fall." For Father Puzonas who has dared to come out publicly against powerful forces, and who has not been afraid to assume blame, we should pray that to him would apply the words of Archbishop Jurgis Matulaitis which the future archbishop inscribed on his own First Mass cards:

"Unjust attacks do not frighten me, only I fear lest the love of the Church of God and of our ideals begin to diminish in our hearts."

Uneasiness is caused also by the fact that the Soviet government allowed only the delegation from Lithuania to participate in an international congress in Nairobi when there was not a single delegation from a Communist country: Neither Poland, nor Hungary nor any other, even Latvia. If the government atheists grant any sort of privilege, it is not out of any good-will for the Church, but for the purposes of spinning some new web.

Intelligent Catholics are wondering uneasily what lies behind this "kindness". All the more, since we find in the magazine of the Moscow patriarchate (1985, No. 7, page 2), a similarly sounding item reporting that on the occasion of the seventy-fifth birthday of Patriarch Piman of Moscow, and his being awarded the.Order of the Red Flag of Work, no delegation participated from the Catholic Church of Latvia, while from Lithuania, "obviously not without pressure from the Commissioner" (for Religious Affairs -- Trans. Note), there was a delegation led, in fact, by an archbishop. Could it be that for all these "favors", the atheistic government will try to demand that we come under the protection of the Patriarch of Moscow, as was once suggested to the Catholics of Czechoslovakia? Let us not trust in the goodness or sincerity of those fighting against the the Church!

In order that false prophets not succeed in leading astray those sons and daughters of our nation living on earth today, the spirit of sacrifice, love and prayer is needed.

I close with the words of Maironis:

"Let us fervently pray that God will protect us From misfortune, storm and frost... That the children of the family would live in unity, And not quarrel like strangers.

"Then hastening, blessed by prayer

Let us go work and suffer for the common cause,

As each knows how and is able."