From the August and September letters of Father Alfonsas Svarinskas:

"...Last week was sunny and warm and today is warm and pleasant. I'm grateful to God for these wonderful days and hours. I have learned to enjoy smalI things. 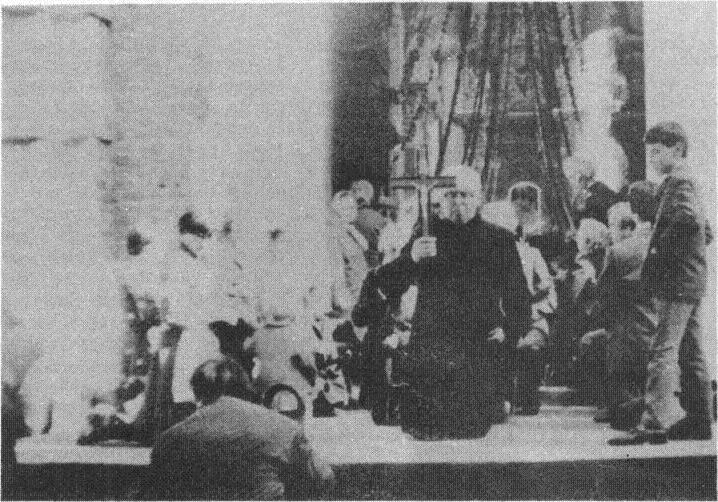 Father   Alfonsas   Svarinskas   leading   pilgrims   in    kneeling procession at theshrine of Our Lady in Šiluva, August 12, 1982.

"The mind of God creates human history even though we little people do not always understand the meaning of history and of our experiences. However, don't worry about me, because I have become accustomed to trying to bear everything in a Christian spirit, like the blessed Job...

"Today is a special day in Šiluva, dear to the hearts of believers since 1612. Everyone today is going to that shrine. This is the third year that I have been kept from these holy places. Today, I too, will place my sacrifice at the statue of the Mother of God in Šiluva.

"...The quotation from de Saint Exupery is good. He is a great French writer, worth reading. I am glad this citation touched your hearts. Really, people do seek all their life and aren't able to find; they are often at fault themselves, flying up in the clouds without seeing what is under their noses. It is time for people and nations to return to the bible... I have learned to rejoice even in a little ray of the sun, beautiful sunsets, a poor little flower or the yellowing leaf of a birch... I am calm in spirit. His Holy Will be done. I would I ike only one thing, that those who have the possibility of working would work with all their might, sparing nothing, even themselves, for there is much to do..."

"In prison, one wishes that the time would pass          as quickly as possible, but I often think that I should desire not the quick or empty passage of time, but that the time should be useful to me and to those to whom I have devoted my life. Therefore, every day I offer God my imprisonment and the longing of my dear ones and fatigue and physical problems when they occur, and everything else which can be offered so that the Lord would be loved more, and that people would draw near to the eternal truth and goodness...

"Today, we're having a wonderfully beautiful Sunday. It seems that nature itself is celebrating the Feast of Christ the King. The sky is clear, the branches of the young birches are covered with a heavy snow, so beautifully ornamented that you cculd place them on the altar. There is not the slightest breeze; it is quiet, peaceful, majestic. At the feet of the Eucharistic King, I have placed many requests --first of all, the needs of those with whom I have shared food for soul and body.

"The Feast of Christ the King this year reminded me of my investiture. Thirty years ago, on this feastday, my class --twenty-four new seminarians-- was presented with the cassock. It was supposed to remind us constantly that we had renounced everything which the world clings to, that the rest of our life was unconditionally dedicated to the service of Christ and love of neighbor, that from now on, our greatest concern would be striving for the goal which Don Bosco expressed in his motto, 'Give me souls, Lord, and take the rest!'

"At our investiture, upper classmen gave us little pictures with beautiful thoughts, while the Spiritual Father presented each one with a large reproduction of Christ the King: the Lord standing before Pilot, hands bound, with a crown of thorns on His head, and on His countenance, it seemed, the suffering of the whole world. Could anyone at that time in the glow of our investiture sense deeply that this King would require of His officers-to-be also no small sacrifice? But everything comes in its own t i me.

"How grateful I am to God that thirty years ago I had alongside me fine friends --idealists. We were all on fire with the idea to train and grow in perfection now and later, to work with all our might. My class chose as a motto, the words of the writer Marija Pečkauskaitė --Šatrijos Ragana (The Witch of Šatrija - Catholic educator and writer, 1878-1930, who played an important role in Lithuanian literary revival -- Trans. Note), 'To rise and to raise', and for our patron, Saint Francis Xavier. Who could have thought then that this patron would share with more than one of us his ideals and invite more than one of our class to the mi ss i ons?

"At Christmas, I would like to visit many people. During the years of my priesthood, the Lord has given me so many friends, benefactors helpers and like-minded people. I would like to press the hand of every one of them on the Feast of Christmas, to greet them, to tell them 'thanks' for the light of their example, for their understanding and response to the word I proclaimed. May the Child of Bethlehem bless, reward everyone a hundred-fold and grant them a good year for 1986. 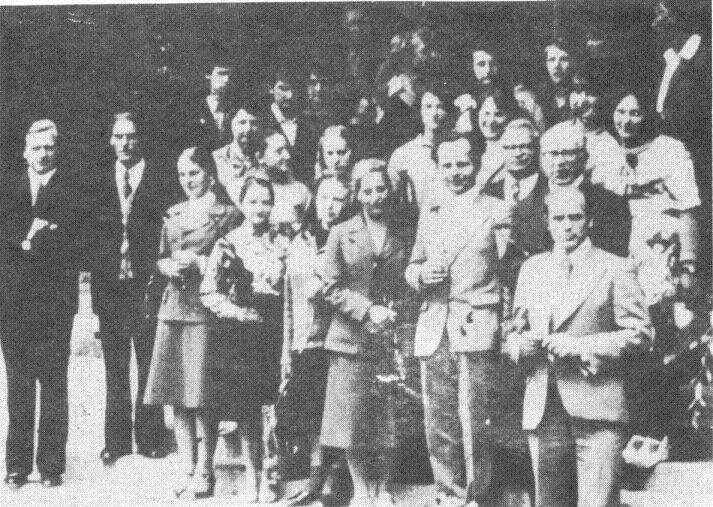 Friends gather outside the courtroom on the last day of Viktoras Petkus5 trial in Vilnius, 1978. Antanas Terleckas is first from left.

On April 19, 1985, Viktoras Petkus was granted an hour and half visit with relatives (through plate glass and by telephone). Five times in a row, i.e., at two years and five years of his sentence, the prisoner's relatives were not allowed to come for visits. The reason was given in a form reply: "Transgressed camp rules." Letters from Viktoras Petkus were also not received for a whole year.

In one of his last letters in 1983, Petkus wrote that the pains had recurred in his face, which had been operated on in camp, and were regularly inflaming his whole head. It required great effort to perform his compulsory labor. When his visits were disallowed and correspondence broke off, it was thought that Petkus' health had seriously declined. On April 19, his relatives were surprised to see in the visiting room Petkus, not looking bad. Asked. "When and where did you obtain treatment, and how do you feel now?", Petkus asked his relatives upon their return to Vilnius to thank Our Lady of the Gates of Dawn for the return of his health.

"There was no hope left... A month after I began to ask, I felt well... Now I am completely recovered...," said the prisoner.

Petkus expressed the hope that with the help of the Heavenly Mother he would yet see Lithuania. (Five camp staff members listened in on the conversat ion.)

On October 14, 1985, Petkus had one more visit coming. Before their departure, Petkus and his relatives received word from the camp administration that the visit would not take place, no reasons indicated.