THE BETRAYALS DO NOT STOP

The faithful of Lithuania are insulted and pained by the constantly increasing number of Lithuanian clergy participating in the so-called Peace Conference in Berlin and other conferences similar to it -- even the celebration of the Victory of Moscow.

If those participating in this "peace" game were immature   youths products of the Communist Youth League -- it would be   possible   to   smile sadly and remain silent. Now it is impossible to remain silent, since   the priests'   so-called   struggle   for   peace   is   nothing   other   than   sheer hypocrisy and betrayal of the Catholic Church.

If these clergymen were really concerned about peace, they would look at this problem through the eyes of their own Catholic Church.

However, not one of these "fighters" or "peacemakers", as the people aptly characterize them, has shown any interest in the position of the Catholic Church on the question of peace.

The latter is set forth clearly enough in the encyclical, Redemptor hominis, par. 17 (6-p. 52-58). Every priest should inscribe deeply in his heart the encyclical's words - "At the basis of peace is respect for inviolable human rights; for peace is justice and war arises from infringement of those rights."

How are we to understand from this point of view the "defenders of peace"? They "defend" the kind of peace in whose name the Church of Queen of Peace in Klaipėda was closed, that peace which spits upon the right of hundreds of thousands of the faithful to participate in services, and upon hundreds of thousands of believers' signatures. Can a priest, the spiritual leader of the faithful, not understand this? If this is not betrayal, then perhaps it is myopia, senility, sclerosis or mental breakdown?

Whom do the so-called defenders of the Peace of Berlin represent? Who the hell sent them? Many go without even informing their Church leadership. The Catholic priests travelling abroad to defend "peace" are being sent by the Communists! Lithuanian priests are representing... Communists! This is an insanity probably unheard of in the history of the world!

Only small children are unaware of the fact that the Communists do not allow everyone to defend peace. The defenders of peace in Moscow were even put on trial. The Communists organize peace marches world-wide, but how viciously they attacked the Baltic Peace and Freedom Cruise. Why then do they send priests and even force them to participate in so-called peace conferences and other conferences? Because this is useful to Soviet domestic and foreign policy: they defend that policy which, proclaiming freedom of religion, "allows" the practice of religious cults, but does not allow those cults to put up buildings, does not allow them to restore those burned down, and even confiscates buildings, trying to weaken religion in all sorts of ways.

For instance, the faithful of the parish of Ryliškiai, in the Diocese of Kaišiadorys, who after their church was burned down, prayed for decades in the cemetery, and were repeatedly ejected even from that place. 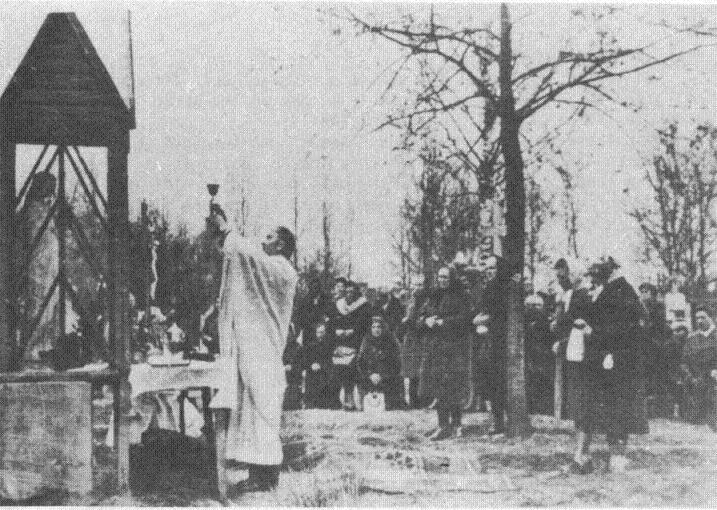 The cemetery of Žalioji is used for Mass because the church has converted into a mill.

The faithful of the parish of Žalioji, in the Diocese of Vilkaviškis, for their Masses under the open sky, the blizzards of winter play the accompaniment, while the church has been converted into a mill, and the government which continues to call itself the most humane in the world, pays no heed, pays no heed to hundreds of petitions, to tears...

The faithful of Batakiai in the Diocese of Telšiai, paid insurance on their church for decades, but when after a fire they applied for insurance compensation, Soviet officials ridiculed them, the money received for insurance was applied to rayon cultural needs, among them, atheistic propaganda. The ridiculing of the faithful of this parish is echoing throughout the world: They are allowed to pray only in the belfry where, during funerals, only the casket fits, while the faithful participating in the funeral must stand out in the rain, the snow, etc. The Rayon Executive Committee of Tauragė organizes the taking down even of a small tarpaulin shelter over the belfry door. There is not even any talk of reconstructing the church -- Moscow is allowing them to build themselves a tiny structure attached to the belfry, but Vilnius refuses to give permission! When Vilnius finally allows it, the Rayon Executive Committee forbids it. Only after a House of Culture and a kindergarten are erected in Batakiai (and the faithful are asking neither funds nor labor of the government), at long last, Lionginas Šepetys, Secretary of the Communist Party of Lithuania came to Batakiai and allowed construction of an attachment to the belfry -- a wooden barracks no larger than the belfry. And   this,   not now... i n the future...

So loudly throughout the entire world is our freedom to practice religious cults publicized! Probably no one in the world has managed to ridicule its own Constitution so blatantly!

And those going to various "peace" conferences under duress or freely, in either case support such a "peace" policy!

The country calling itself the most democratic in the world often boasts on various occasions how much literature is published for Lithuanian Catholics. More than one hierarch of the Church in Lithuania --"defender of peace" -- has sung the praises of that "freedom" of the press in all sorts of interviews. That wonderful freedom of the press has determined to publish on the occasion of the 600-year Jubilee of the Baptism of Lithuania 50,000 small religious commemorative cards (as they did for the Jubi lee of Saint Casimir). Such a quantity would probably not be enough for the faithful of the City of Panevėžys! So much for freedom!

When the government of Poland proceded to denigrate the Holy Father, the clergy of Poland protested. The same happened in Czechoslovakia.

The betrayal -- there is no other name for it -- does not stop. This year too, when the archbishop visited the Vatican, eight priests from Lithuania left for Moscow at the same time to participate in the so-called Peace Conference in Berlin. Is it not time to come to our senses and to draw the necessary conclusions?