The instructors were interested in knowing whether Miss Gudaitytė still believes. The student explained that she cannot imagine life without faith, and faith does not interfere with work; on the contrary, it can only help. Mrs. Pečulienė corrected Miss Gudaitytė, saying that she had been expelled from school not for religion, but for anti-Soviet activity (writing letters to prisoners! -- Ed. Note).

Finally, Miss Gudaitytė was told to bring her record from work and after writing a petition, to begin her practicum.

On April 16, when Miss Gudaitytė had brought her record and other documents, Instructor Pečelienė began to explain that   her statement was not complete and that the record contained nothing about corrmuni ty work. "It seems that you have not changed, so the faculty council will not alter its decision unless in your statement you promise to change your convictions," said Mrs. Pečelienė.

The student stated that she would not change her convictions, and would not rewrite her statement. It was suggested to Miss Gudaityte that she take her academic documentation and try to enroll in another school of the same genre. Sometime later, Miss Gudaitytė was surrrnoned by Vice Director Grigas and Department Head Miss Kiaunytė. Vice Director Grigas repeated what Instructor Pečelienė had said: "Your record is incomplete, your statement is unsuitable and the faculty council meeting can do nothing."

Vice Director Grigas advised the student to think up a reason for transferring and go to another school; it would be better for her and for the school that she net tell anyone about the conversation.

Miss Gudaitytė went to the Utena School of Medicine. Here, they promised to allow her to finish studies. The Vice Director repeatedly demanded that she tell the real reasons for transferring. Miss Gudaitytė said that she had been expelled by the KGB and the exact reason for this, she herself did not know.

A telephone ca11 was made to Kaunas. After conversation with the Director of the P. Mažylis School of Medicine, the situation changed. The Vice Director stated that religion and medicine are incompatible; the school prepares only atheist medical personnel, but not believers. "You must choose another school, because you will not be able to work in this field," the Vice Di rector argued.

Miss Gudaitytė was asked where she had last worked. Learning that it was in a kindergarten, the Vice Director was surprised. "How can you work with children, and why did no one ever tell you that you could corrupt the children?"

The girl explained that the children's parents had no complaints about her work. When Miss Gudaitytė requested an explanation why she was being treated so unfairly since the Soviet Constitution guarantees everyone, believers as well as nonbelievers, the right to education, the Vice Director replied that she could study, but she would just have to pick another specialty, in which her work would not be intimately tied in wi th people.

Finally, the Utena School of Medicine told Miss Gudaitytė to phone sometime later, while she herself promised to contact the KGB in Kaunas and Vilnius to clear up the matter. When Miss Gudaitytė called at the appointed time, it was explained to her that she would not have time to complete her practicum, and in general, she was being advised to apply again to the P. Mažylis School of Medicine. 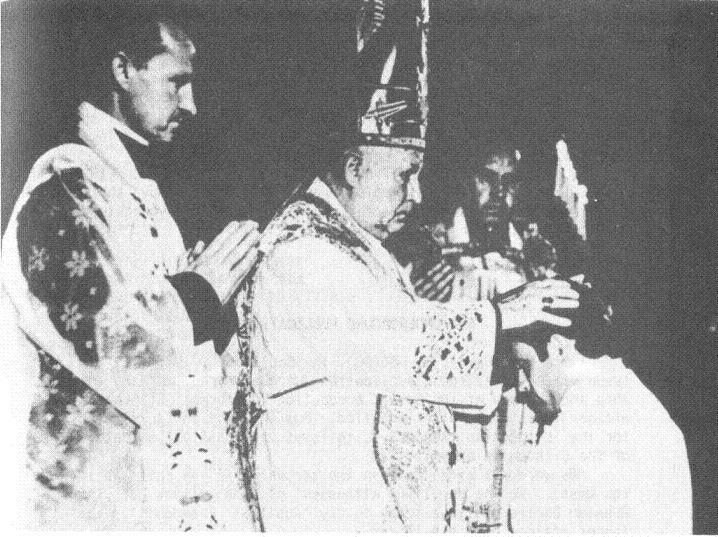 Archbishop Liudvikas Povilonis ordains a candidate to the priesthood at the Kaunas Basilica. The Interdiocesan Theological Seminary in Kaunas is the sole remaining seminary in Lithuania since the Soviet occupation.

On June 1, 1986, ordination to priesthood was being conferred in the Archcathedral Basilica of Kaunas. Some believing children and youth of the parish of Kiaukliai also went to the solemnities. On June 2, a control commission consisting of District Chairman Vladas Karaliūnas, Communal Farm Party organizer Juozas Sabakonis, School Principal Mrs. Jadvyga Grigaitiene and her assistant, Mrs. Aldona Kalininą visited the homes of those who had gone.

The control commission demanded that the Gudonis, Mat i još i us and Novikas families tell where their children had gone, where they would be visiting, and the addresses where they would be staying. The parents remained firm, and would not allow themselves to be interrogated, expressing satisfaction that their children were associating with people who are believers and not with drunkards. On the pretext that the mother did not know where her children were, The officials threatened to take away mothers' rights from Mrs. Matijosiene when she refused to give the required addresses.

For the purposes of intimidation, a complaint was written and Mrs. MatijoSiené was told to sign a statement to the effect that she was familiar with the contents of the document.

On June 3, students Vidmantas Novikas, Ruta Gudonyté, Danius and Gintaras Mati josius were interrogated by their teachers, and pressured to write explanations. The youngsters would not explain or sign anything.