"What is one to think, seeing whole pages scrawled with signatures?" an anonymous wr iter asks the readers of Soviet Klaipėda in his article, "Noise, lies and the commandments of god" (Tarybinė Klaipėda -- Soviet Klaipėda, April 15, 1986).

What is the normal, healthy-minded person to think? He will think, first of all, that the document must be very important if such a mass of people support it with their signatures, and he will immediately delve into the text of the document. Unfortunately, one cannot count the author of this anonymous article among such sensible people, for he rushes, first of all, to analyze the signatures: to see whether they are "in alphabetical order", whether the surnames are correct, whether the addresses and positions of the signers are given. Thus he is interested, not in substance but in form. It is possible, therefore, to think that we have come up against a formalist and bureaucrat, of which there is, alas, no lack in our agencies.

Those reading the anonymous article further are forced to come to some even sadder conclusions: This is a person of ill-will writing, who is not concerned with truth or justice, but defends with all means at his disposal an obvious injustice, a terrible wrong-doing, a shameful scandal: the seizure carried out by the Soviet government of the church in Klaipėda, erected with funds from the faithful.

The anonymous writer rhetorically exclaims, "It is high time for all the residents of Klaipėda to learn what is being written in their name." What a ridiculous concern! For a long time, almost twenty years, it has been known not only to residents of Klaipėda, but to all of Lithuania and world-wide, that the atheists took the beautiful Church of Mary, Queen of Peace away from the faithful and converted it into a philharmonic hall; they know that the faithful of Klaipėda cannot fit into their little old church for services; they know that justice is being sought in various forums. Piles of documents, petitions and complaints have been written, and hundreds of thousands of signatures have been collected. They know, also, that this whole just and persistent struggle of the faithful has butted up against dense insensitivity on the part of the atheists.

Why are the signatures so important to the author of the article? Why does he ask "Where are the correct surnames, where are the addresses and occupations?" when at the same time, he has not only concealed his place of employment, occupation, address or name, but has not even entered a "distorted signature".

Why the KGB needs correct addresses, names and places of employment, not only the   faithful   know,   but   also   all   those 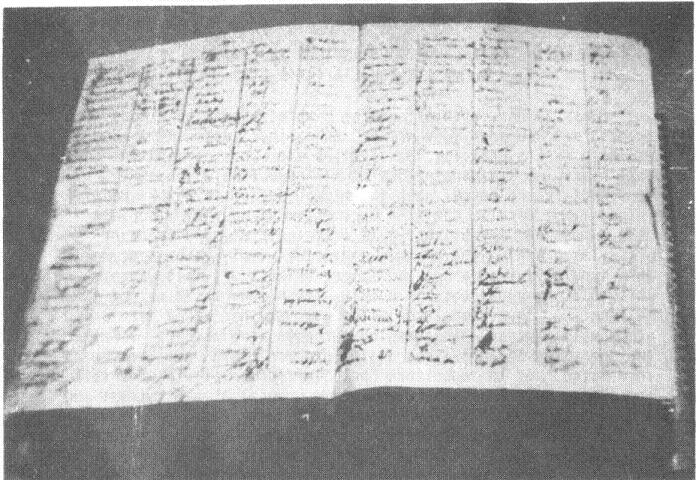 A petition signed by 148,149   believers in Lithuania   for   the
return of the Klaipeda Church. Although it has been the largest, it represents only one in a series since the church was confiscated thirty years ago.

--unbelievers or the indifferent-- who have tried in any way to defend the truth. For the KGB, it is a directory, indicating which home must be searched, which worker can be terrorized until he or she disclaims their own signature or else, refusing to obey, must be demoted. And what is the KGB to do with those whose signatures they cannot decipher, and whom they cannot terrorize? It seems this question is not new to the anonymous writer, either: "Who can decipher entire pages of squiggles? What do they conceal?" Here one would like to stop and ask once again: And who is hiding behind the mask of anonymity?

The anonymous writer is bothered because in the petitions, "In the name of the residents of Klaipeda, it is demanded that the philharmonic hall of Klaipeda be a church."

First of all, in the name of all the residents of Klaipeda and faithful of Lithuania, to ask the anonymous writer not to confuse the truth: it is not that "the philharmonic hall must be a church", but a church must not be converted to a philharmonic hall, when the faithful are simultaneously being forced to make use of cramped facilities unsuitable for a church. 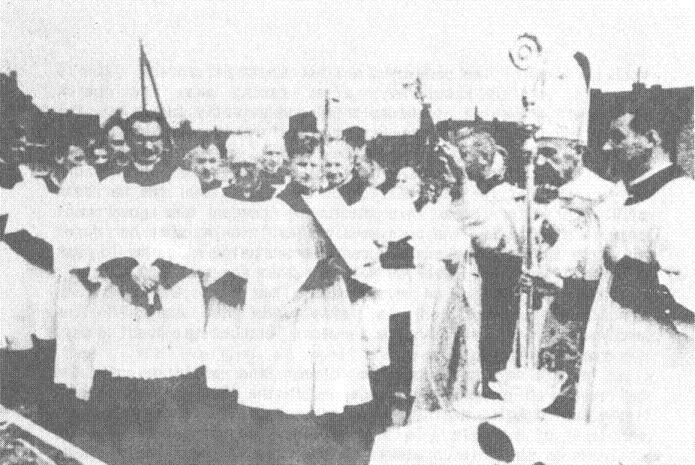 His Excellency, Bishop Petras Maželis of Telšiai, blessing the cornerstone of the Church of Mary, Queen of Peace in Klaipėda on June 30, 1957. Shortly after completion, the church —built with the funds of believers-- was seized by the Soviet government and converted into a concert hall.

In the article, everything is distorted in a similar fashion through naive deviousness, deceit and bold-faced lies; the desire to intimidate the faithful who continue to seek truth and justice is not concealed.

In this way, the anonymous author's pen transforms the just demands of the faithful into "complaints, patched and pasted together on the basis of lies", "puzzling" (!), "mysterious" (!) and "unfounded" letters; he calls the writing of petitions and the collecting of signatures incitement of the residents of Klaipeda, disruption of order, vilification of the Soviet government, rabble-rousing attacks and unjust activities; the signatures most often appear under petitions "deceitfully elicited", falsified, thanks to some kind of "trickery"; and the signatures themselves are not signatures but very elaborately twisted squiggles, and not signed but "smeared". Even the very construction of the church back in those days was "not construction but a whole mess of illegalities, frauds and outright theft."

"Although much time has gone by, nevertheless even today simple workers can be found who were   not   paid   for   contracted work performed," the anonymous writer complains. Indeed, it is something to think about: Why, after taking away the church built with the funds of the faithful and unjustly punishing the clergy who organized the construction of the church, government officials "forgot" to pay for their work all of the church builders who could have been left upaid in full for their work only because of the confiscation of the church and the arrests of the priests? Does this fact not demean the government officials? What was the anonymous writer thinking when he dared to write that the workers had been left unpaid? Allow me to ask once more: then why have you not paid them for so long?

Deceit is concealed everywhere: "Who has the right to concern themselves with the affairs of the church?" the anonymous writer asks. And he answers, "Without a doubt, only its real caretakers."

In this way, he wishes to direct the attention of the believing public away from concern with the affair of the church --the public which as the saying goes among us, is the true caretaker of our life. To acknowledge the Committee or its chairman as the sole caretaker of the church is very convenient for the enemies of the Church who have reserved to themselves the right of dismissing it or of not confirming its election if it does not suit the officials of the government.

Hence it is easy to dispose of the chairman alone. To devalue and demean those who collect signatures just because they are "not young", "not too well educated", "their profession is humble" (a taxi-driver), in a workers' state is really not right; in this way, a person's honor and dignity are hurt. All the less have they deserved the name of cheaters and liars.

"From all this rise a few more questions: What prompts these people to act so tendentiously? Who teaches and supports them?" the anonymous writer further asks.

If he really does not know "who", then we suggest that he accept the conviction of the faithful: The injustice and deceit committed against the faithful impel Is them to act; the lies, injustice and perfidy (There is surprisingly much of that, even in the short article of the anonymous writer.) urge them to resist, because healthy human nature does not wish to compromise with evil, and seeks goodness and truth; these, people are taught to "act tendentiously" by their Christian conscience, and they are supported by God!

The enthusiasm of the faithful, in their struggle against injustices and falsehoods, is "paid" by the threats, punishments, arrests, imprisonments, labor camps and even death.

Ending this article, one would like to ask the anonymous author of the article to respond not only to the faithful in Klaipeda, but also to the question intriguing all the faithful of Lithuania. When will the Church of the Queen of Peace in Klaipeda, erected with the offerings of the faithful   themselves finally be returned? Will the faithful continue to have only the right to purchase a ticket and hear a concert? If they do not plan to return the church, then perhaps at least the funds contributed toward its construction should be returned to the faithful of Klaipeda. After all, stealing is forbidden not only by the Ten Commandments of God, but by the Constitutions of the USSR and the LSSR.

The author suggests that the writers of the petitions "recite to themselves the Ten Commandments of God and the seven capital sins". Love of neighbor requires one to instruct the ignorant. Read the Constitutions of the USSR and the LSSR and only then write such articles. If after all that, you still do not change your mind concerning the unjust confiscation of the church in Klaipeda, your article and your attitude not only toward the drafting of petitions regarding the church of Klaipeda, but also with regard to others, which defend basic rights of believers, is understandable. You belong to that "chosen" group of the public, which being "purely Soviet" consider the faithful to be beyond the pale of the law, perhaps that is the answer to your question: why your article is anonymous!