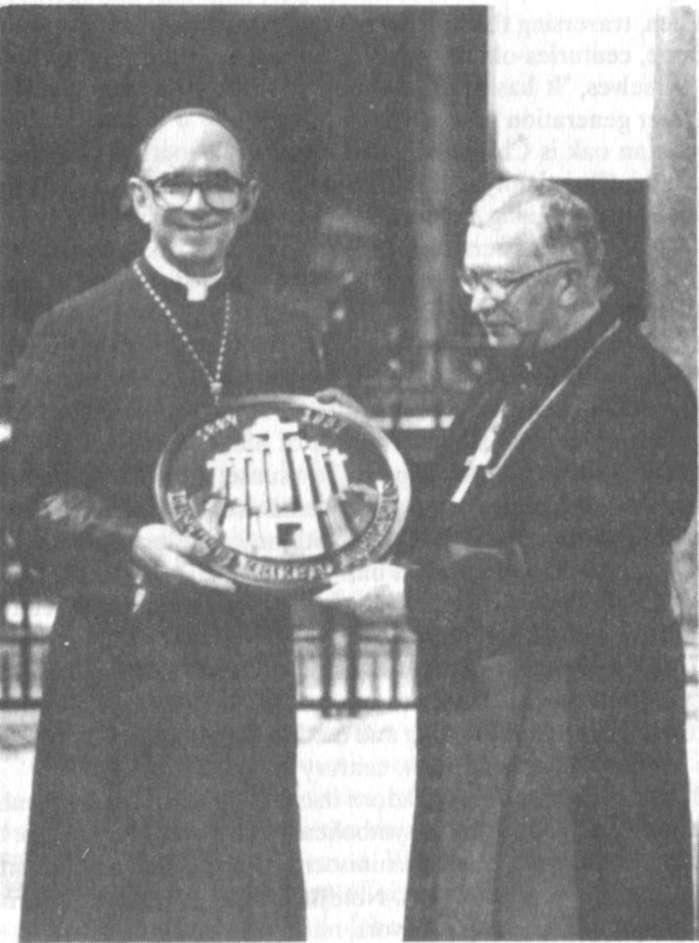 Joseph Cardinal Bernardin (left) of Chicago accepting a gift in the name of the Catholics of Lithuania from Bishop Antanas Vaičius of Telšiai, Lithuania. The presentation took place in Rome at the Basilica of St. Mary Major, following a Mass of thanksgiving for the beatification of Archbishop Jurgis Matulaitis . Bishop Vaičius headed a delegation of eight priests sent to Rome from Lithuania, representing the six dioceses of Lithuania, the seminary and the Marian Fathers, to participate in the ceremonies commemorating the 600th anniversary of Lithuania's baptism in June, 1987.

When, traversing the hills and dales of our native land, we see by the wayside a large, centuries-old oak with its spreading branches, we immediate­ly think to ourselves, "It has been standing, rustling, for so many years, while generation after generation passes by."

Such an oak is Christianity which has sunk roots six-hundred years deep in our land. Christianity is Christ come to our land, to our homes, to our hearts. It is Christ bringing light to our minds, parting the curtain which separated us from the answers to the most important questions of our lives, which move everyone without exception: Where did the world come from? Where did I come from? What awaits me after death? What kind of person should I be?

It is Christ, showing the way for man to attain happiness, true and eter­nal happiness. It is Christ become our friend who will never let us down; be­come our guide at the confusing crossroads of life; become our comfort and support in the difficult hours, our hope at life's sunset. Christ is strength for our weak will, our constant invitation to noble humanism, an invitation to respond to the call of duty and the cry of the unfortunate, an invitation to adorn the world with our work and to struggle against untruth, against sin, against error. He is an invitation to love, to sacrifice, an invitation to serve great and sacred causes.

The Spirit of Christ is able, like nothing else, according to one Ger­man writer (G. Roetzinger), to become masters of our own passions and inclina­tions and servants of our brother, to turn from wolves to sheep, and from sheep to heroes. It would be worth thinking and meditating about this often, especial­ly when the sands of time mark a new century for the nation.

This year, the Church will adorn itself with an artistic new emblem in which this most significant event is symbolically portrayed. We see six broken crosses and a seventh one erect, reminiscent of the Pillar of Gediminas (a Lithuanian national symbol - Trans. Note). Thus are portrayed our nation's past and future: our tears, our endeavors, mistakes and tasks.

Six crosses - six centuries of Christianity in the history of our nation. The crosses are broken because the road of Christianity to our nation was dif­ficult, our nation's history is painful. Lithuanians have experienced the highs and the lows.

"...Brought the Muscovites to their knees,

Whow bathed his steed in the Black Sea,

Whom the Cossacks slaughtered in Kražiai

And governors hung on Insurgents' Hill."

And we might add: The Lithuanian is the one whom they dragged off to the wilds of Siberia, to suffering and to death. The poet, contemplating on all this writes:

The road of Christianity to Lithuania was difficult. Our neighbors, the Teutonic Order, which sought to subjugate the Lithuanians under the pretext of conversion, did not possess the Christian spirit or Gospel love. The first ruler of Lithuania to be baptized was Mindaugas, in 1250. But it was not given to Christianity to take root in our nation. With the assassination of Mindaugas, it too was killed.

140 years had to pass before the Lithuanians renounced paganism. It took close ties with the Poles; it took the marriage of the Lithuanian Jogaila and the Polish Jadwiga, even though this friendship between Trakai and Cracow (capital of the Grand Duchy of Lithuania and the Kingdom of Poland, respec­tively - Trans. Note), this loan of Polish culture, cost Lithuania dearly. The time came when Polish became the official language of Lithuania (1697).

The Church of Lithuania lacked zealous and dedicated Lithuanian clergy, and this was a painful wound: the Lithuanians had no opportunity to get to know the teaching of Christ in depth.

History did not give Lithuania peaceful times. In the 17th Century, our land was devastated by invading Swedes, later the Russians who burned Vilnius. Gediminas' city burned for seventeen days; the university was destroyed. The foreigners pillaged, killed and burned. War was accompanied by plague and famine. An even more painful page of history was turned over when the Rus­sians occupied Lithuania at the end of the 18th Century. The name of Lithuania disappeared from the map: It was called the Northwest Territory ("Sievero zapadnyj kraij").

The 19th Century was especially cruel to Lithuania. The Russians per­secuted any manifestation of Lithuanian culture. They introduced Polish into the University of Vilnius (1816), which became the Polish bastion until 1932 when it was supressed. The Lithuanian nation was left without an anvil on which to forge its intelligentsia.

Many churches and monasteries were closed. The Russian govern­ment began to interfere with the education of the clergy. In 1837, Czar Nicholas I forbade the sons of the peasantry to enter the seminary, while the sons of the gentry required permission of the Governor General. Candidates for the semi­nary had to pledge allegiance to the government. For seven years, they did not allow anyone to enter the seminary (1863-1870). Later, they limited the number of seminarians so drastically that only about sixty young men were allowed to study in the seminaries of Vilnius, Kaunas and Mogelev.

Many priests were exiled to the depths of Russia. In 1863, the Diocese of Žemaitija lost one-sixth of its priests: 106 priests were sent to the farthest corners of Russia. Bishop Motiejus Valančius himself was transferred from Varniai to Kaunas, and kept there under house arrest. The government sought to leave the people without priests. The lot of the exile fell also to the bishops: Bishops Krasinskis, Grinoveckis, Zvieravičius and Ropas died far from their flocks.

The Russians looked upon Catholicism as an anti-state element. Governor-General Muroviov wrote, "The schools must be protected from the influence of Catholic clergy."

One very painful blow to Lithuania was the ban on Lithuanian print­ing in the Latin alphabet. The Lithuanians were being suffocated, denied ac­cess to that cultural treasure, the book. Bishop Antanas Baranauskas wrote:

Does not fall at dawn

As copiously as our brothers'

However, during 120 years of Russian oppression, the Lithuanians did not assimilate. During forty years of the press ban, they did not give up Lithuanian writing. The nation of plow-boys did not bow to the will of the for­eigners. The Lithuanians won the war for Lithuanian writing because they would not stop fighting: They wrote, they secretly printed and distributed books, they went to prison, to Siberia.

"We did not fall asleep,

Similar waves are, even now, rolling over our country. After the Second World War, many churches were closed, monasteries and convents surpressed, literature banned and persecuted, the number of seminarians limited and atheism was proclaimed the state religion. The Archdiocese of Vilnius has been without a bishop throughout most of the post-war era: Archbishop Mečislovas Reinys died in Vladimir Prison and Bishop Julijonas Steponavičius has been in exile for twenty-six years and is not allowed to function. Zealous clergy, loyal to the Church, are called extremists, considered disrupters of unity, and more than one of them have been and are behind bars.

The government atheists, ignoring their own laws and international agreements, interfere most crudely in the internal affairs of the Church and the conscience of the individual. In the press, calumnies and ridicule regarding Christianity do not let up, when at the same time more than one seriously think­ing Russian admits that it was precisely the introduction of Christianity which strengthened Russia.

Thus we know from history, and we are witnesses these days, how dif­ficult it is for the Tree of Christianity to stand, to rise and to enlighten when it is constantly and ruthlessly being broken. What does the destruction of crosses produce? A brighter human spirit? A lighter heart? No. Author A. Zurba writes: "Now there is increasingly less of helping others," now that wayside cros­ses are being destroyed and God is concealed from children and youth.

"It is dark in the heart without a thought of God," the Eastern poet Nezamy said a few hundred years ago. The writer P. Dirgėla notes, "It is terrible when man learns about the true God of the world only after reaching maturity, when he is no longer a child."

Crosses can be demolished not only by the storms of history, not only ' by those who in their souls, as the 1980 Nobel Prize winner Czeslov Miloscz says, "That attention to the Absolute which becomes prayer has not been developed."

The cross can be demolished also by those who consider themselves believers. This is even more terrible. Christianity within us is wounded and dis­torted by egoism, self-love, doubt and fear. One must become accustomed to Christianity. The more accustomed we become, the better we understand it. The better we understand it, the more we ourselves grow. Frequently we take from Christianity what is "fitting", what "suits" us and we reject what we do not understand or what, on account of our own negligence, we simply do not wish to understand.

We have been baptized, but is our soul truly Christian? This is the most important and essential question which each one of us must answer in all seriousness. Thus, do we see things though the eyes of Christ?

External storms we need not fear. Christ did not promise His Church tranquil days. He promised its survival in even the worst of storms, and this com­forts and encourages us. The thing we have to fear most is that the Tree of Chris­tianity fall, or that it become bent out of shape in ourselves - that would be the worst thing. This happens when, although considering ourselves Christians, we do not renounce pagan behavior, when we do not value Christianity with all its demands, do not live in accordance with it, do not dare to stand under its flag or because of our faults and negligence, we are unable to stand under it. Not without reason does the poet Justinas Marcinkevičius write:

You will not suddenly snap within me?"

In the symbol which will adorn our churches, we see a seventh cross, an upright cross. This means: The Lithuanian's soul must be Christian, the land of Lithuania must be the land of Jesus and Mary! Striding into our seventh cen­tury of Christianity, the cross in our hearts must remain upright, unbroken, even though tomorrow be dark and stormy! We must preserve a clear conscience, a strong faith, noble hearts, devout souls, industrious hands, strong and indis­soluble families. Such must be our future! We must remain faithful to the bap­tism of our ancestors and our own.