HAIL THE HEROES OF CHURCH AND NATION!

On December 2, last year, we commemorated the 101st birthday of one of the most outstanding members of the Catholic Church in Lithuania, one of our foremost men of science, and citizens, Pranas Dovydaitis. The commemora­tion was held at the Carmelite Church in Kaunas. The preacher described in depth the multi-faceted activities of Pranas Dovydaitis, his service to the Catholic Church and to Lithuanian science.

Dovydaitis, by harmonizing his public and scientific endeavors with the truths of Christ's Gospel, became an example to us Lithuanians, a guiding star for all walks of life. His directives and advice to the teachers of Lithuania and the shapers of her culture have not lost their relevance to this day.

On January 27,1988, during evening services in the church of Prienai, Professor Antanas Maceina was memorialized. Such commemorations are gradually becoming traditional. It is most regrettable that the average listener or reader in Lithuania does not have the opportunity to investigate the literary and philosophical legacy of Antanas Maceina. This is a great loss for everyone, but especially for the younger generation. Such commemorations make it pos­sible to become more familiar with one of the most significant and creative minds in Christian philosophy, not only in Lithuania, but in all of Western Europe.

Also becoming traditional are commemorations of the Blessed Archbishop Jurgis Matulaitis, not only in Marijampolė (Headquarters of the Marian Congregation which Blessed Jurgis reformed. Now known as Kapsukas — Trans. Note), but in other churches of Lithuania as well. On January 30-31, 1988, such an impressive commemoration took place in the Carmelite Church in Kaunas. It is good that preachers are constantly revealing to the faithful ever new traits of the character and activity of Blessed Jurgis, especially in the field of pastoral activity.

In public and political life, the word stagnation has become fashionable. Who knows but that this word fits us Catholics... As long as we were longing for the beatification of Archbishop Matulaitis, his name was repeated in almost every Mass. Now that the goal has been attained - silence. It is essen­tial to be aware of the fact that a Lithuanian, our fellow contryman and com­panion (for some of us, actually a contemporary), our spiritual guide, Archbishop Jurgis Matulaitis, can be our intercessor in all matters before the Throne of God.

The life and activity of Archbishop Matulaitis is a proof that even in these difficult times of government atheism, it is possible and essential to remain loyal to the Church of Christ, to the Gospel he proclaimed. If we wish to build rather than wreck, we must burn like a candle on the altar of the Lord, follow­ing the example of Archbishop Jurgis Matulaitis, instead of smoldering like ashes in worldly meeting halls.

On February 5,1988, in the Church of Rudamina, a commemoration of the second anniversary of the death of Father Juozas Zdebskis took place. Participating were His Excellency Bishop Julijonas Steponavičius, many of the late Father Zdebskis's kindred spirits from among clergy and laity, and of course, as always in such a case, a group of observers from the atheistic govern­ment. Bishop Steponavičius and the priests who preached took a fresh look at many of those problems and tasks which always preoccupied the late Father Zdebskis.

For instance, how to remain completely faithful to the Church which Christ established, the Gospel He proclaimed, even in these times so un­favorable to religion; national morality; heroic love of neighbor, etc. In accord with these, Father Zdebskis arranged his activities as man and as priest. The ex­ample of Father Zdebskis is a unique instance of contemporary Catholic action.

His ability to master such a wide range of altruistic activities is very appealing. "Everything takes effort," he often used to say, "effort and practical charity. This is the sign by which disciples of Christ will be known."

After the gravestone was blessed, all sang, "Marija, Marija," "Lietuva brangi" and "Lietuva tėvynė mūsų" (A popular Marian hymn, a patriotic hymn and the national anthem of Independent Lithuania. — Trans. Note) At Father Zdebskis's grave, Robertas Grigas spoke in the name of the young people. He invited them to support the Eucharistic movement actively and, by their per­sonal example through self-sacrificing love of Christ and Church, to contribute to the speedier resurrection of the nation.

People sent by the government tried to disturb the orderliness of the commemoration, but not a single person showed up in their midst who would dare to stand up and be counted. The only thing heard was behind-the-scenes criticism of each other, "Why did't you speak up?", etc. They contented them­selves with the usual photographing of participants and the recording of license numbers.

A commemoration of the fiftieth anniversary of the death of Msgr. Adomas Jakštas-Dambrauskas was held in the light of events of February 16. Services took place in the Cathedral of Kaunas February 21. A state of un­declared war was still in effect in the city. The services and their participants were closely watched by KGB agents. During the services, two sermons were preached: one by Bishop Juozas Preikšas, and the other by the rector of the seminary in Kaunas, Father Viktoras Butkus.

Bishop Preikšas explored in depth the work of Msgr. Jakštas-Dambrauskas, his great contribution to Lithuanian culture, to public life and to the development of religious consciousness.

After the services, the faithful assembled at his grave prayed together, recited poetry and sang hymns. At the end, the national anthem of Independent 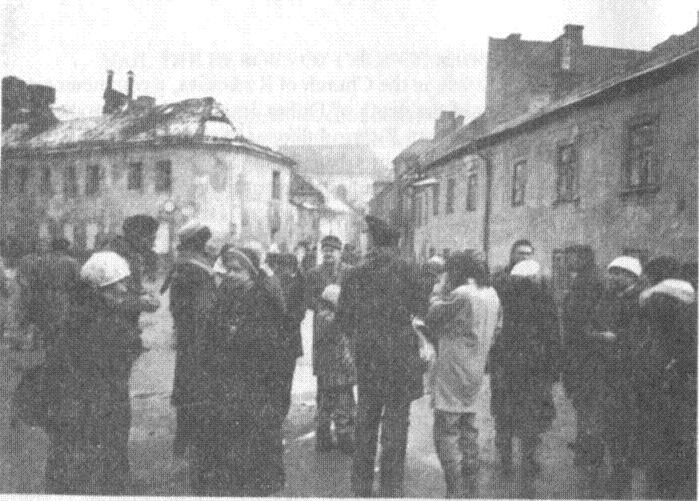 This year of 1988 was unusual for our nation. On February 16,1918, taking advantage of historical circumstances, Lithuania was able to proclaim it­self as a sovereign state. February 16 marked seventy years since this historical fact, inestimably precious to every Lithuanian. Our nation is subjugated, but the desire for freedom lives; it manifests itself February 16 every year, on holidays special to our nation, and especially this jubilee year.

This year, the government atheists, in their propaganda activities, have publicized this date as never before. Well before the jubilee, in republic and rayon newspapers and magazines, columns appeared vying with each other in anger, and not infrequently, in calumny. Nor did television or radio slumber. Here, all those who in any way urged a commemoration of February 16, were each taken to task several times a day. Special objects of anger were President of the U.S.A., Ronald Reagan and Western radio broadcasts.

In factories and offices, workers were forced to sign a document saying that they wish to live within the U.S.S.R. forever. In cities and towns, compul­sory meetings were held against the commemoration of February 16 (in some cases, participants were even promised monetary prizes); students and school children were pressured to attack President Ronald Reagan of the U.S.A., ac­cusing him of interfering in the internal affairs of the "Union", and shouting incessantly, "Wc arc annoyed!" "Who gave the organizers of February 16 the right?" "We will not stand for commemorations of February 16!"

Government officials, factory and office directors, forgetting restruc­turing and democratization, threatened dissident individuals as never before with Stalin-era repression: demotion, expulsion from work (cutting back of jobs!), truncheons and deprivation of freedom.

More active and nationally sophisticated Lithuanians had to be sent to other republics on assignment, and there were many warnings handed out in the offices of the KGB, militia, and local procurators. Placing flowers on the graves of freedom-fighters is treated as a terrible offense against the Soviet government. All that is well-known to those living in the Soviet Union, and more than one has experienced it personally.

The bishops of Lithuania were warned by the Presidium of the Supreme Soviet concerning February 16; priests and members of church com­mittees, by Rayon Executive Committees (Almost all the priests of Lithuania were personally visited by the rayon, and some of them even by Vilnius KGB).

For approximately ten evenings preceding February 16 in Lithuania, something amounting almost to a military alert began, which lasted ten more days after February 16: in the streets, in the squares and even in the cemeteries, militia-men were on duty and auxiliary policemen from all agencies were as­signed to assist them, while above all, the KGB closely monitored the situation.

The government atheists, fearing an aroused public, isolated from the August 23 demonstration the more active participants and organizers, placing them under house arrest. Other Catholic activists were rounded up in the streets February 16, and taken to militia stations on the grounds that they were suspi­cious persons.

And still the commemorations of the anniversary took place, closely associated with the Church this year, as never before. In many churches in Lithuania, beginning Sunday, February 14, services were held for Lithuania. The more zealous priests preached sermons dedicated especially to the nation's an­niversary. Led by the youth, the faithful made the Way of the Cross and said the Angelus in the churches after Mass, recalling those who gave their lives for the independence of Lithuania.

In some parish churches, the faithful organized adoration of the Blessed Sacrament throughout the day, praying God's forgiveness for the nation's sins and begging His blessing. After services, the national anthem of Independent Lithuania was sung, as well as "Lietnva brangi" by Maironis and Naujelis. On this occasion, in honor of those who sacrificed and worked for the nation's freedom, flowers were placed at the grave of those who signed the Declaration of Independence on February 16, the graves of our fellow countrymen who died for liberty, and historical monuments dear to the nation (they were immediately thrown away by KGB agents and militiamen on duly.)

In the largest cities of Lithuania, the army was drawn up, vans for hauling people away were concealed in yards, masses of KGB and militia were on duty with the assignment of operationally taking care of the slightest demonstration.

Believers were particularly pained by pastors who not only failed to sustain their fellow citizens' enthusiasm for celebrating the jubilee, but did not even allow them to organize church services for Lithuania or to sing the nation­al anthem of Independent Lithuania, urging them instead to disperse. This was the case in the Church of Vytautas in Kaunas, St. George in Šiauliai and Alytus II.

Every commemoration of our heroes is the peal of a bell, preventing us from becoming oblivious to religious and national spirit. Just as the spirit of the first Christians was their constant support under persecution, so the children of Lithuania must draw strength and perseverence from its saintly sons and daughters.