On January 22,1988, Bronius Poškus of Žemaičių 8-58, Kretinga, was summoned before the Chief of the Kretinga Rayon KGB.

At the beginning of the interrogation, Pocevičius stated that the ques­tions had been prepared and sent by the Procurator's Office of Vilnius. The questions concerned the Chronicle of the Catholic Church in Lithuania: Whether he read this publication, to whom he had given it and where he had obtained it, whether he had signed a ptition addressed to the Congress of the United States of America, and also to General Secretary Mikhail Gorbachev, concerning per­mission to commemorate February 16, when and what circumstances he had signed the aforesaid petitions and is ne acquainted with Vilnius resident Petras Cidzikas. Having acquainted Poškus with the questions which the interroga­tion accomplished, Pocevičius tried, in essence, to deny the interrogation in progress. In his words, it was not an interrogation or a questioning, but simply an explanation and response to questions sent by the Procurator's Office.

"How am I to understand such talk on your part?" asked the surprised subject. "I received a special summons bearing the seal and signature of a KGB agent in which it clearly says in the Lithuanian language that my appearance is mandatory, and from your words, it would appear that I came of my own free will. If this is so, then I refuse to give any kind of explanation of my own free will," Poškus said.

Chief Pocevičius corrected himself unwillingly, saying that it was necessary to question him.

Poškus refused to reply directly to the question whether he had read the Chronicle of the Catholic Church Lithuania, saying that this was his own busi­ness. According to his firm conviction, the Chronicle writes the truth, only it is too bad that it is unable to encompass all the sufferings and experiences of the people of the nation. And many of them remain unknown.

Chekist Pocevičius tried to explain that the opportunity had been created for believers to issue their own religious publication, but the bishops had refused. Poškus corrected him, saying that the bishops, in refusing the pub­lication, had expressed not only their own wishes, but those of all the faithful. "We do not need the kind of publication which would be controlled by the KGB and the Office of the Commissioner for Religious Affairs. That would be noth­ing but propaganda aimed at foreigners. Let the Chronicle of the Catholic Church in Lithuania appear without obstruction," Poškus demanded.

Poškus did not deny that he had signed the aforesaid statements. To the question who had incited him, he replied that he was not a kindergartener, so he did not need incitement. He had been moved to sign by the climate of the times, the facts, and events, basically the secret agreements of Hitler and Stalin which Molotov and Ribbentrop had signed, August 23,1939. 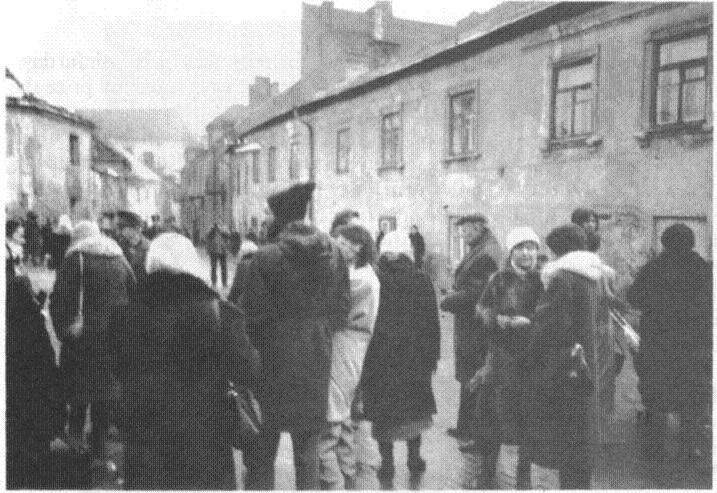 Participants in the Feb. 16, 1988 demonstration in Vilnius.

When the interrogator tried to find out who had collected the signa­tures and when, Poškus explained, "I signed the texts, I did not refuse to sign, but where, when and who had collected signatures is my business."

"If you won't tell me, you'll tell the Procurator's Office in Vilnius," Pocevičius fumed. The interrogator demanded that Poškus go to Vilnius February 16 to celebrate the 70th anniversary of the independence of Lithuania.

Poškus declared that he would agree to go only on the condition that permission would be given to commemorate February 16 publicly in Kretinga. The KGB chief would not agree to such a proposal. Pocevičius asked the sub­ject under interrogation whether he really could not reorient himself political­ly, or in that case, he suggested that he go abroad.

Among other things, he mentioned that Nijolė Sadūnaitė and people like her could also leave without interference. Poškus replied that there would be no reorientation, that he could not forget freedom, even though at the time he was only twelve years old, and that he had no intention of leaving Lithuania which is dearer to him than life. He was born here, he grew up here, and he in­tended to die here.

During the interrogation, the subject of the post-war era was brought up. Pocevičius tried to argue that deportations of the residents of Lithuania to Siberia was only in response to armed resistance. "I remember well the first oc­cupation. There was no armed resistence then. How many did they exile to Rus­sia, how many did they kill in Lithuania?

"Today, this is no secret to anyone. I remember well those painful days. Every Lithuanian who was alive at the time knows at what a painful price the communal farms were created," said Poškus.

Here he mentioned a whole list of examples. It is painful and infuriat­ing that to this day, there is no resolve to restore truth and justice in full.

Poškus brought up the question of believers' lack of legal guarantees. He objected to the exile of Bishop Julijonas Steponavičius of Vilnius. He demanded rectification of the injustice committed against the bishop and the faithful, even though it is doubtful whether that is at all possible. He mentioned the priest-prisoners Alfonsas Svarinskas and Sigitas Tamkevičius, unjustly con­fined to Soviet labor camps, and demanded the return of churches desecrated and converted to warehouses and museums, etc.

The interrogation lasted more or less two hours. Pocevičius demanded that Poškus read the record of interrogation, and sign it, threatening othewise to turn him over to the Procurator's Office in Vilnius. Poškus categorically refused to read or to sign the record. As the interrogation drew to a close, Poškus felt nervously exhausted. When he returned home, an ambulance had to be summoned to take him to the hospital in Kretinga where he spent twelve days.

On February 8, Poškus was again summoned to come to the offices of the KGB. He did not go. When he did not arrive, militia officials came to his home several times looking for him.

Poškus did not accept the summons, or sign it, but only asked the of­ficers to convey to KGB Chief Pocevičius this message: "I will not go to the KGB of my own free will any more. If I am needed, put handcuffs on me and take me there."

During Lent, 1988 (Passion Sunday), in front of the Archbasilica Cathedral of Kaunas, signatures were being collected for the return of the Cathedral of Vilnius. Some Russian KGB agent seized from Mrs. Kazimiera Tubienė, who was collecting the signatures, a petition bearing about 300 signa­tures, and took her to the KGB office for interrogation. The woman asked to be released, and the chekist explained that he would let her go if only he were not being followed by another security agent.

On May 13, 1988, Šiauliai resident Vincas Danielius was summoned to the Šiauliai City KGB for routine "brainwashing".

Chekist Benjaminas Slankauskas considered Danielius the principle organizer of gathering signatures on the petition for the release of Petras Gražulis. Danielius denied it. The KGB agent dared to say that Gražulis, in his words, "went to prison for money". With Danielius stating that freedom could not be sold for any money, Chekist Slankauskas hesitated.

Slankauskas advised Danielius to think about his future, and not to as­sociate with such individuals as Regina Teresiutė, Mečislovas Jurevičius, Pet­kevičius and others. Danielius was detained at the KGB about an hour.