The Rev. Sigitas Tamkevičius, pastor of Kybartai, appealed to the Vilkaviškis RayonCourt the 50-ruble fine imposed on him for con­ducting an All Souls Day procession to the cemetery.

The first trial session was held on Decenber 1, 1978. The court­room and the hallways were packed with believers. Judge Stan­kaitis kept postponing Father Tamkevičius' trial in the hope that the people would disperse. But something unexpected happened: the crowd which had gathered outside the court building began to say the Rosary aloud. Under the pretense that certain documents were missing, the frightened Judge Stankaitis postponed the case. The faithful in the courtroom began to sing "Marija, Marija" ("Mary, Mary"). The judge attempted to silence them but was unsuccessful. It is difficult to describe the mood prevailing in the courtroom. From the portrait hanging on the wall stared the malevolent eyes of Lenin, while the faithful sang with tears in their eyes: "Mary, Mary . . . lighten our slavery . . .save us from the terrible foe." Swept by enthusiasm, the faithful standing outside joined in the singing, and this beautiful hymn so indicative of the spirit of the downtrodded Lithuanian rang far through the streets of Vilkaviš­kis.

Because a huge crowd of the faithful—some 500 people—had gathered for the trial, someone ordered that the second trial session be held at a moment's notice, without anyone being notified. Father Tamkevičius was brought the summons during the night of December 20th and the trial was set to begin at 10:00 A.M. the following morning. Unfortunately, the pastor had left after the evening services, the summons was not served and the trial was again postponed.

The third time, the trial session was held on January 10, 1979. The summonses were again served only the night before, so that as few believers as possible would attend the trial. Unfortunately, this 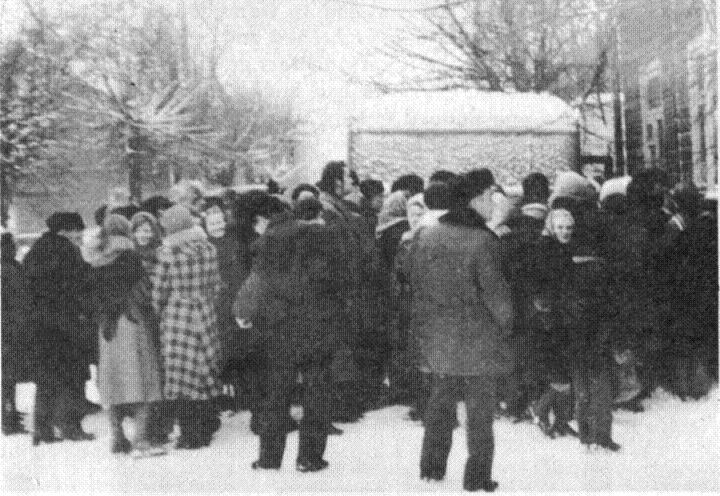 At the time of the trial of Rev. Sigitas Tamkevičius. Forbidden to enter the courtroom, the faithful gather outside.

time again people gathered from very early morning at the Vilkaviškis court building. In order to justify the large number of militiamen present, several criminal prisoners were brought to the trial to hear the court's ruling.

Before the start of the court session, the militia and Judge Slen-fuktas exerted much noise, hatred and threats to brutally chase all the people from the court hallway into the street. The believers present in the courtroom were left to wait for the trial which never took place! Judge Šlenfuktas took Father Tamkevičius to a small room on the second floor and still panting from chasing people out, hastely began the trial proceedings. Not a single believer was admitted into the trial room, only five priests managed to push their way in nearly by force.

The judge did not permit Father Tamkevičius to read his prepared statement. In protest against the court's arbitrary decision, the priest left the trial room. The court continued its inquiry into the case.

In the meantime, the faithful who had been chased into the street said the Rosary. Militiaman Dziegoraitis rushed in a rage to disperse 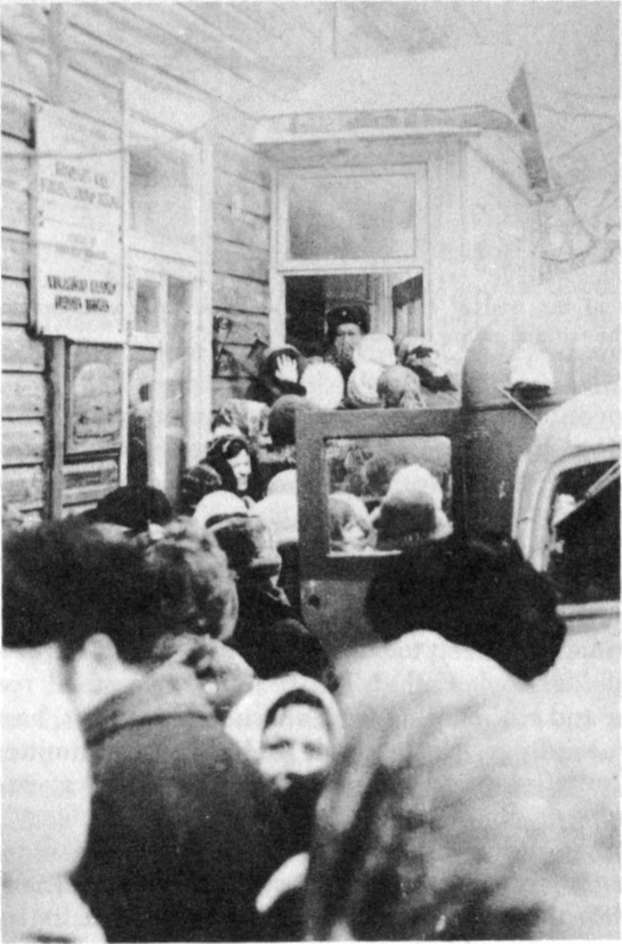 At the time of the trial of Rev. Sigitas Tamkevicius 1979.1.10. Militiaman prevents the faithful from entering the courtroom.

the people. But he did not succeed in intimidating the faithful: It seemed that he was the one frightened and confused, for when one group stopped saying the Rosary, another group immediately took it up. In this confusion, everyone had but one desire: to keep the prayer going. No one noticed ir kept track of when the mysteries started or ended, the whole crowd simply repeated in unison: "Hail Mary . . . Hail Mary . . . Hail Mary . . ." During a brief pause, the hymn "Maria, Maria" suddenly rang out.

Some of the young people tried at least to gain entrance into the court corridor, but three militiamen bodily barred the doors from in­side to prevent anyone entering. The mood of government officials was accurately voiced in the words of an unknown citizen-perhaps a security agent—about the faithful, which he lashed out in a blind rage through clenched teeth: "What we need is a machine gun . . ."

The court ruled that Father Sigitas Tamkevicius did violate Soviet laws and was fined justly.

When the "criminal" Father Tamkevicius emerged, the crowd applauded him: some congratulated him, others presented him with flowers, others stuffed money into his pockets to pay the fine, and still others began to lift the pastor aloft and shout: "Hur­rah!" The militiamen just shrugged their shoulders: "Perhaps the pastor won if the people are congratulating him so?"

This was a moral victory: The faithful had conquered a fear which had oppressed them for decades. They were now boldly proclaiming their solidarity with which their discriminated leaders and also a protest against their oppressors.

Statement by the Rev. Sigitas Tamkevicius, Pastor of Kybartai, before the Vilkaviškis People's Court

On October 19, 1978 the Vilkaviškis Rayon newspaper Pergalė (Victory) announced that the civil ceremony honoring the dead at the Vilkaviškis Rayon cemetery would be held on November 1st at 7:00 P.M. Notices listing the same hour and date of honoring the dead were posted in the town of Kybartai. I then announced from the pulpit in church that we faithful would pray for the dead at the cemetery on November 1st at 6:00 P.M. and would return to the church before 7:00 P.M. We would thus not interfere with the atheists' ceremony for the dead.

On November 1st, events in Kybartai took the following course:

I know not at whose direction, the time 7:00 P.M. was pasted over with 6:00 P.M. on the town notices and at the bottom of the notices the organizing "Kybartai Executive Committee" was replaced with the "Council on People's Traditions." This was deliberately done late to prevent me from changing the time of the religious procession to the cemetery.

At 6:00 P.M. on November 1st, I as pastor of the Kybartai parish and a crowd of some thousand believers proceeded in procession to the cemetery. In order to keep from disrupting vehicular traffic, we proceeded along the sidewalk of the main Kapsuko street and turned into Jakovlevo, the side street which leads to the cemetery. At the cemetery we were confronted by loudspeakers erected by the atheists of Kybartai blaring poems. Entering the cemetery, we found a covered vehicle standing just inside on the main path holding four loudspeakers aimed in our direction. Because we could not pass the vehicle, we prayed for the dead right there at the cemetery gate, while poems were loudly broadcast during our entire prayers. I leave it to the court to decide who committed the offense which art. 145 of the LSSR Criminal Code describes as: "disturbance of religious services ... is punishable by deprivation of freedom of up to one year, or by rehabilitative work for the same period, or by a fine of up to 100 rubles." The atheists of Kybartai offended the faithful by their inhuman behavior. I do not ask the court to punish the offenders, but in the future I want us believers to be considered equal Soviet Union citizens and not stepsons who can be ridiculed.

After November 1st, the Kybartai City Executive Committee sent a complaint to the Vilkaviškis Rayon government, that I had organized a procession at 6:00 P.M. on November 1st and, proceeding along the main Kapsuko and Jakovlevo streets, had dis­rupted vehicular traffic. The Vilkaviškis Rayon Administrative Com­mission imposed a 50-ruble fine against me on the basis of this false complain. From the actions of the Administrative Commission I gained the distinct impression that it was acting at someone's direc­tion. For instance, Administrative Commission Chairman Urbonas even dared testify that he had personally been present in Kybartai on November 1st and saw the faithful walk in the main street, and not along the sidewalk. One commission member even suggested that I be fined 100 rubles, double what the law allows. I was threatened with punishment for every single future "offense."

Why did I go to the cemetery on November 1st with a crowd of believers? Catholic liturgy requires prayers for the dead during All Souls Dav and Soviet laws do not forbid praying for the dead in the cemetery. Special permits are not required to do this (seeCom­mentary on the LSSR Criminal Code, 1974, p. 226). I am ac­cused of organizing a religious procession to the cemetery without permission from the government. It is true I did not request per­mission because, over the entire postwar period, LSSR Executive Committees have not once granted such permission to any priest, although art. 48 of the LSSR Constitution proclaims that Lithuanian SSR citizens are guaranteed the freedoms of speech, press, assembly, mass meetings, street processions and demonstrations. The Constitu­tion is thè main body of law and no other laws, decrees or government instructions can contradict it.

Art. 50 of the LSSR Constitution states that "The Church in the Lithuanian SSR is separate from the state . . .", i.e. the state does not interfere in Church affairs and does not indicate how to pray, who can pray and the like.

I was punished by the Administrative Commission on the basis of the outdated and unconstitutional decrees of the Lithuanian SSR Supreme Soviet Presidium: On the Application of art. 143 of the LSSR Criminal Code (May 12, 1966) and On the Confirmation of the Statutes on Religious Congregations (July 28, 1976). According to these two Supreme Soviet Presidium decrees, we believer are completely devoid of rights. For instance, the Rayon government can, whenever it so wishes, close a church, confiscate the holy Mass vessels and put them to profane use. A priest does not have the right to go to a believer's apartment and baptize his baby or bless his house. According to the decrees of the Supreme Soviet Praesidium, a priest cannot teach children the truths of the faith though this is his basic duty as imposed by Christ himself. A believer cannot give aid to another believer when the latter is in need. Without permission from the Rayongovernment a priest cannot go to another church and perform liturgical services. A visiting priest cannot say Holy Mass in church without permission from the Rayon government. Every item the faithful donate to the church, for example, rugs, chalices, chandeliers or vestments, automatically become the property of the executive committee.

These few examples clearly illustrate the servile position in which we faithful find ourselves. If we are required to observe out­dated, unconstitutional Supreme Soviet Praesidium decrees, then the Lithuanian SSR Constitution should be rewritten to declare that the Lithuanian SSR Catholic Church is subject to the state and must carry out the government's orders in all instances. The faithful are forbidden to hold street processions and demonstrations unless they receive special permission from the government.

In concluding, I would like to add that I do not expect anything from the RayonPeople's Court because its decision is known before­hand. My only request is that theRayon People's Court relay my thoughts to the authorities of the Lithuanian SSR which must seriously concern itself with seeing that our rights as believers are not violated, for we, no less than the atheists, earn our bread and the structure of the government rests on our shoulders.

N.B. When Judge Šlenfuktas would not allow the entire speech to be read, Father Tamkevičius handed it to the court and left the courtroom as a sign of protest.