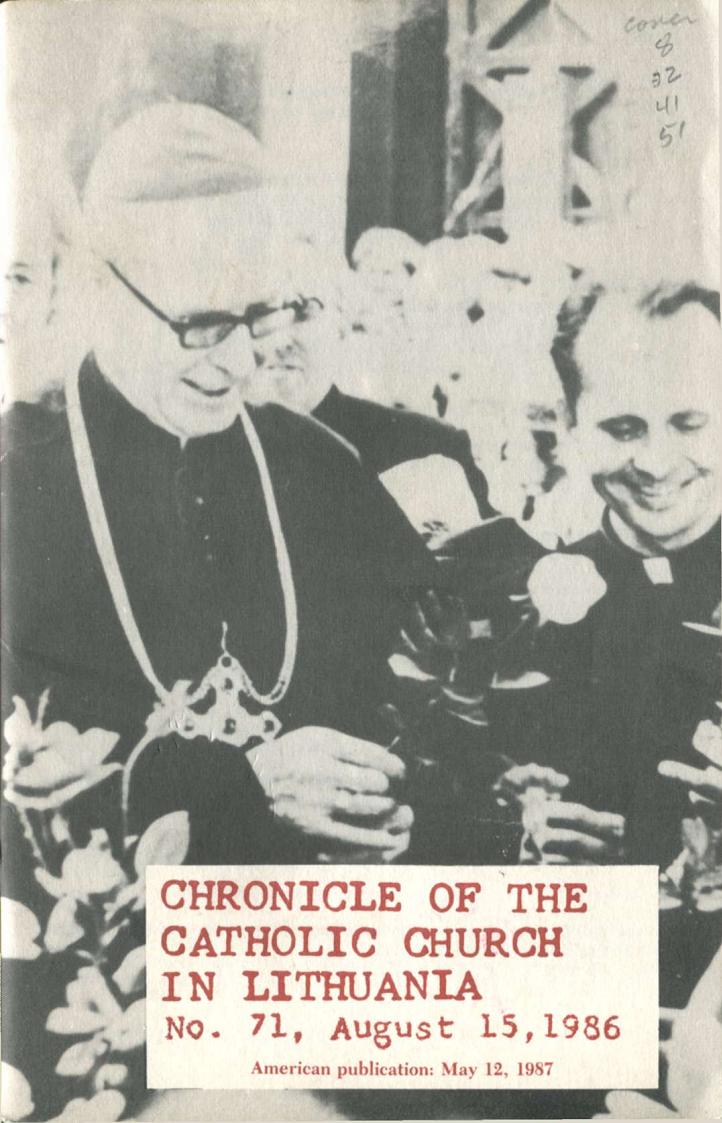 If you can, reproduce it!

This issue is dedicated to the beloved Shepherd-exi le of our   Nation. His Excellency. Bishop Julijonas Steponavičius, this year   commemorating    the jubilees of twenty-five years of exile, fifty years of priesthood    and seventy-five years of age

CHRONICLE Of THE CATHOLIC CHURCH IN LITHUANIA, NO. 71

2. The Times of Murovjov and Stalin Return

4. Rebuttal of an Anonymous Article in the Newspape Soviet Klaipėda

In 1980, commemorating the 25th anniversary of your consecration as a bishop, we sent you, venerable brother, a letter full of friendship and love, in which we recalled the course of your episcopacy, described your activities and saluted you joyfully, as it were, with a hymn. Your pastoral zeal, your courage and steadfastness in adversity were such that honoring you can be compared with the virtues of the Apostles whose honor you share. Together with us, on that occasion, you were honored not only by your flock, for whom you are constantly concerned, but also by the entire Church, which mourns with those who mourn, and rejoices with those who rejoice.

And now, venerable brother, another event approaches special to you and to all who know and love you: the fiftieth anniversary of your priesthood, which is the beginning and root of the episcopacy which you possess. This is truly a blessed day, for on that day God chose you from among many people as a priest after His own heart, distinguished you from others like the sacred Host, that you might offer yourself together with His Son. That day, he appointed you his most faithful servant, and you attained such honor as one who makes good use of the powers conferred by Christ's priesthood.

THE TIMES OF MUROVJOV AND STALIN RETURN

After the arrests of Fathers Alfonsas Svarinskas, Sigitas Tamkevičius and Jonas-Kąstytis Matulionis, some priests --collaborators with the Soviet government and the more timid ones-- took it upon themselves to disseminate the idea that in case of conflict with the atheistic government, concessions must be made. Voices were heard daring to consider the self-sacrificing activities of the priests as unwise excesses and to accuse them of undoing unity, and the like. Those thinking differently and acting otherwise they called short-sighted, detrimental to Church unity.

The government atheists immediately spotted the altered morale among priests. In one of his earlier discussions with priests, Religious Affairs Commissioner Petras Anilionis emphasized that after the arrests of Fathers Alfonsas Svarinskas and Sigitas Tamkevičius, the attitudes of priests improved,   and 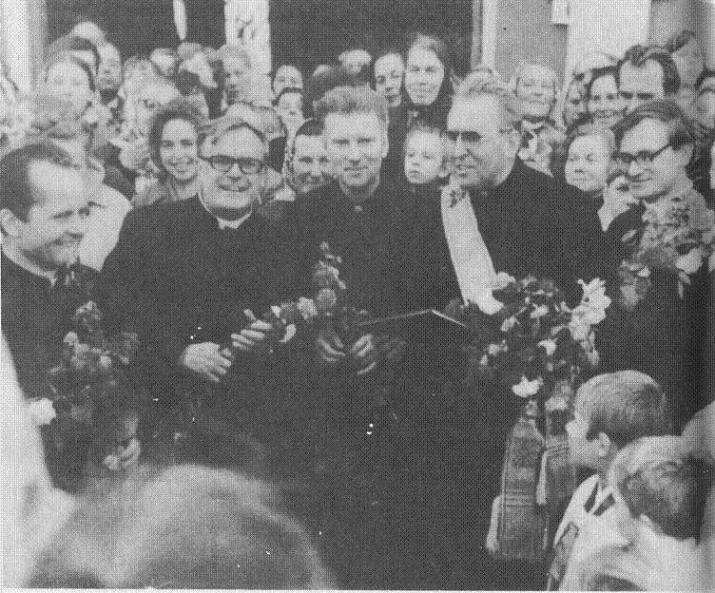 The founding members of the Catholic Committee for the Defense of Believers Rights. From left to right: Fathers Sigitas Tamkevičius, Vincentas Vėlavicius, Juozas Zdebskis, Alfonsas Svarinskas and Jonas Kauneckas. Fathers Tamkevičius and Svarinskas are each serving 10 year terms in labor camp and internal exile. Father Juozas Zdebskis was killed in an automobile accident under mysterious circumstances on February 5, 1986. (See Chronicle of the Catholic Church in Lithuania, No. 70.)

he emphasized that this will undoubtedly have positive results for the entire Catholic Church. That fear and flattery of the government atheists, under cover of the misleading word "diplomacy", have hastened the return of the times of Murovjov and Stalin, is witnessed by the meeting June 27, 1986, in Vilnius, of Religious Affairs Commissioner Petras Anilionis with the bishops and administrators of dioceses of Lithuania.

it is not right to ridicule universally respected views, for by so doing, you will not convince your adherents, but only offend them.

When we look at the history of world culture, we see that for long ages, in all nations touched by Christian civilization, Mary the Mother of Jesus has become the personification of the most sublime femininity, and a girl's and mother's most beautiful ideal. She is, at the same time, the irrrnaculate virgin and the noble-hearted mother consenting tc her Son's sacrifice for humankind. Delete from the picture of. human culture art, poetry, custom -- everything inspired by the irrrnaculate youth and mysterious, unwonted motherhood of Mary -- how the picture of woman and mother pales!

From the 4th Century hymn of the Syrian Deacon, Ephriam, to Mary; through Dante, Petrarch and Novalis; through the "I will not allow you to demean the name of the Mother of God!" uttered by the hero in Adam Mickiewicz' All Souls'; to the youths' cry to their friend in the contemporary Lithuanian Soviet sketch, "You be Mary!", runs the veneration of the ideal of Mary. Thanks to her, generation after generation has known where to turn its gaze, from whom to learn beauty of spirit, even in the lowliest circumstances of life and work.

"What is one to think, seeing whole pages scrawled with signatures?" an anonymous wr iter asks the readers of Soviet Klaipėda in his article, "Noise, lies and the commandments of god" (Tarybinė Klaipėda -- Soviet Klaipėda, April 15, 1986).

What is the normal, healthy-minded person to think? He will think, first of all, that the document must be very important if such a mass of people support it with their signatures, and he will immediately delve into the text of the document. Unfortunately, one cannot count the author of this anonymous article among such sensible people, for he rushes, first of all, to analyze the signatures: to see whether they are "in alphabetical order", whether the surnames are correct, whether the addresses and positions of the signers are given. Thus he is interested, not in substance but in form. It is possible, therefore, to think that we have come up against a formalist and bureaucrat, of which there is, alas, no lack in our agencies.

Those reading the anonymous article further are forced to come to some even sadder conclusions: This is a person of ill-will writing, who is not concerned with truth or justice, but defends with all means at his disposal an obvious injustice, a terrible wrong-doing, a shameful scandal: the seizure carried out by the Soviet government of the church in Klaipėda, erected with funds from the faithful.

On April 24, 1985, a search was carried out in the Kaunas apartment of the soldier, Juozas Kazalupskas, his storage shed and collective garden. The search was carried out by Militia Officer Vasiliauskas, Investigator Kavaliauskas, KGB Agents Matulevičius and another who did not present his credentials. Official witnesses were Mr. and Mrs. Vinuikov. Seized during the search were: Issue number 10 of the underground publication Rūpintoje! is, (The Pensive Christ), photographs of the priests Alfonsas Svarinskas and Sigitas Tamkevičius; pamphlets and books: "Believe and Be Silent", "Prophecies According to the LSSR Constitution", "The Associate Pastor of Kražiai and Martyr, S. Rimkus", a notebook, separate typewritten pages, manuscripts of J. Kazalupskas, a starter's pistol...

Presenting themselves to form the search, the officials stated that the search was being done on suspicion of theft, but finishing the search, they acknowledged that they were looking for printing apparatus and underground literature. Chekist Matulevičius was interested in knowing whether Kazalupskas had tape recordings of sermons by Svarinskas, Tamkevičius, Jonas Kauneckas, Petras Našlėnas, et al. Kazalupskas refused to sign the search report. The search lasted five hours.

"Time passes very quickly here, too; it has been three years already and it seems like everything happened yesterday. Time leaves marks on everyone, and I'm 62 years old already. I do not have much longer to live, and yet, how many good ideas in my soul! But I am not growing old in spirit, probably because I am in good physical condition.

"On Sundays, I adhere to our Viduklė schedule. Each day, we draw nearer to eternity. It is important that we mature in spirit, and do everything in our power to leave the world behind us more beautiful, better and more just. Let us remember the verse in the Gospel about the talents; we must justify God's trust in us.

"I am glad that you visit Viduklė and remember me. Usually it is said, 'Out of sight, out of mind.' In this case, it is just the opposite: after all, it has been three years. In this way we a 11 grow...

To: General Secretary Mikhail Gorbachev of the Central Committee Communist Party of the Soviet Union

From:   The Priests of the Diocese of Panevėžys of the Catholic

In 1987, the Catholics of Lithuania will celebrate the 600-year jubilee of the introduction of Christianity into Lithuania. In the course of 600 years, Christian teaching has become deeply rooted in our nation. The Constitution of the USSR guarantees freedom of conscience, but atheist activists turn this guarantee of the Constitution into something of little worth.

1.The children of believers are persecuted in school, morally terrorized for public church attendance and forcibly enrolled in atheistic organizations against the wishes of their parents. Those not signing up are warned that they will not be able to get into institutions of higher or advanced education. Those who do sign up are forbidden to fulfill religious oblications and those who participate in services, some of them candidates for diplomas, are not even allowed to take final examinations. Those wishing to fulfill their religious obligations must do so surreptitiously, and thus from their early years, are forced to be hypocrites. This is a canker on our society.

Aušra (The Dawn), No. 50(90). In September, 1985, a new issue of the underground publication Aušra appeared, marking the 45th anniversary of the Soviet occupation. A former Lithuanian officer in an open letter entitled, "How the Russian Tanks Voted for the 'Lithuanian' Assembly", tells of the painful situation of the Lithuanian army in 1940:

"We were all alone between two serpents, in the East and in the West... We the surviving witnesses of the crimes of the Russian Empire continue today to cry 'Justice! Freedom!'", the former officer ends his letter.

In the article "Who Are the Real Pirates?", approval is given to the very necessary efforts of Baltic patriots abroad and all freedom-loving people to direct world attention to the real situation of the Baltic nations. Gratitude is expressed to everyone contributing to the Baltic Tribunal which took place in July, 1985, in Copenhagen; the Baltic Peace and Freedom Cruise, ending with the demonstration in Helsinki by passengers of the Baltic Star and meetings and demonstrations in Stockholm, which once again reminded the "lookouts" in Moscow that the real piratical attack on the Baltic shore took place forty-five years ago, when Moscow seized the three Baltic States.