On June 6, 1982, the Apostolic Administrator of the Arch­diocese of Kaunas and the Diocese of Vilkaviškis, Bishop Liudvi­kas Povilonis, ordained the following deacons to the priesthood at the Kaunas Cathedral:

Not since 1963 has the Kaunas Theological Seminary graduated this many priests in one year.

Following their ordination, the new priests were greeted at the seminary by a large crowd of believers who had come to the ordina­tion from various Lithuanian localities. Responding to the best wishes of young people, Fathers Kazys Meilius and Rokas Puzonas spoke very meaningfully. Everyone rejoiced that despite difficult conditions, the new priests are setting off to work with an unbroken spirit.

This large group of new priests will considerably replenish the thinning ranks of Lithuanian priests able to work. The Chronicle extends its wishes that the new priests find their way in current 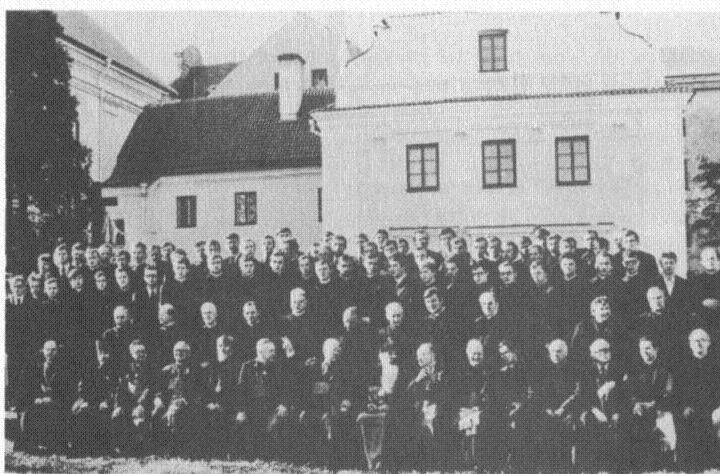 Seminarians and faculty of the Kaunas Theological Seminary, assembled on the occasion of the visit of Cardinal Lekai on a papal mission to Lithuania in 1979.

circumstances and with courage and dedication, witness Christ their entire lives to the persecuted nation's Catholics and their errant brothers.