On November 1, 1984, after the evening Mass, the faithful of the parish of Kybartai went in procession to the cemetery near the church, and there prayed for the deceased.

Presiding over the ceremonies according to the Ritual of the Catholic Church was the associate pastor of Kybartai, Father Jonas Kastytis Matulionis.

The procession of the faithful to the cemetery was watched by militia and KGB. During the procession Chairman Gudžiūnas of the Kybartai District ran up to Father Matulionis and told him to have the people disperse. The faithful, paying no attention, continued in orderly fashion to the cemetery, singing the Litany of the Saints, and there, after praying for the deceased, they dispersed.

November 7 and 8, residents of Kybartai noticed that many KGB from elsewhere had come to town, and were closely watching the church and rectory. Friday, November 9, the tension mounted. Automobiles with KGB agents in them constantly guarded the town. After the evening Mass, at 8:00 PM, a group of about thirty people accompanied Father Matulionis to the hospital, where the priest anointed a patient. Security police dogged the steps of the priest at a distance, but they did not dare to approach the priest or faithful.

A second patient to whom Father Matulionis was supposed to minister that evening was twelve miles away from Kybartai in the City of Nesterov (Region of Kaliningrad). In the town of Nesterov, militia officials tried to detain Father Matulionis, even before he had conferred the Sacrament of the Sick on the patient, but the faithful who had accompanied the priest successfully defended him. Then the security police summoned Nesterov City Militia to their assistance and producing a warrant, arrested Father Matulionis as he left the patient's apartment. Thus the parish of Kybartai became witness to the unjust arrest of its second zealous priest. At the same time, the militia detained Edmundas Žemaitis (an eleventh-class student), who was present, but when they took him to militia headquarters in Vilkaviškis and discovered that they had mistakenly apprehended not Romas Žemaitis, but his brother Edmundas, they let the young man go.

On November 12, 1984, Kybartai resident Romas Žemaitis had to report to the Military Station, on call-up, for compulsory military service. As soon as he arrived, he was arrested.

Father Matulionis and young Romas Žemaitis are accused of organizing the religious procession to the cemetery. They are being held at Lukiškiai Prison in Vilnius.

In the spring of this year, for his active participation in church life and in the trial of Father Sigitas Tamkevičius in Vilnius, Romas Žemaitis was not allowed to take his final middle school examinations.

After the arrest, an octave of atonement took place in the church of Kybartai, asking God for strength for those arrested without cause — Father Jonas Matulionis and Romas Žemaitis, and also commemorating all who are suffering for God and country. Throughout the octave, the people made the Way of the Cross on their knees after Mass.

To: The Prosecutor of the LSSR

From: The Faithful of the Parish of Kybartai

On November 9 and 12 of this year (1984), we the undersigned believers had occasion to be witnesses of certain painful events:

In the City of Nesterov (Kaliningrad Region), the parish priest of Kybartai, Jonas Matulionis, was arrested while visiting a patient.

The faithful, having noticed that the priest was being harassed by the KGB, accompanied him and saw how the KGB and militia, acted tactlessly and rudely in arresting him. Equally 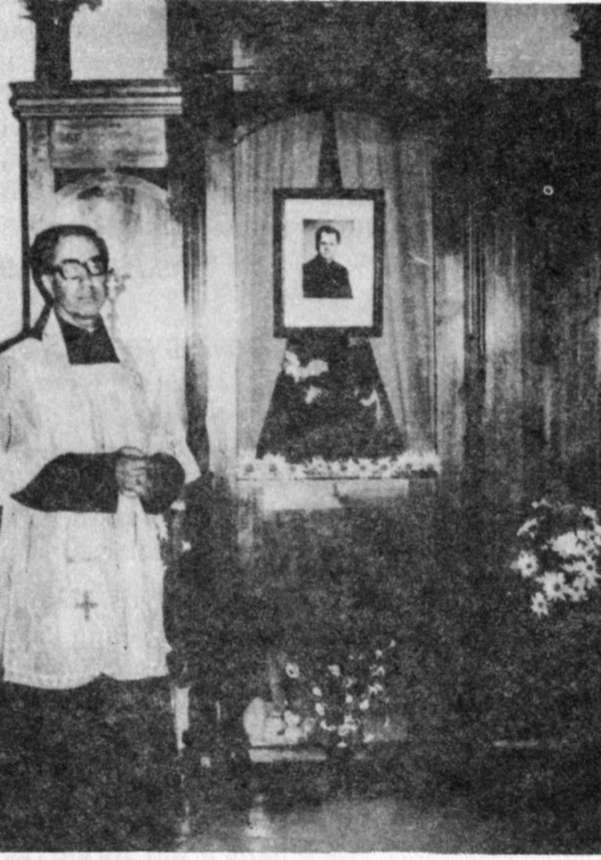 Fr. Jonas-Kastytis Matulionis, graduate of the un­derground seminary, at the confessional turned shrine of pastor Fr. Sigitas Tamkevičius, in the church of Kybartai, after his arrest in 1983. Matulionis was arrested a year later presumably because Soviet authorities did not recognize his appointment as assistant pastor at the church and accused him of being an "impostor priest". The Soviets passed a sentence of 3 years imprisonment on Matulionis in January 1985.

unjust was the November 12 arrest of Romas Žemaitis, a zealous member of our parish.

We believers find it very painful that in our parish the second conscientious, good priest, essential to us parishioners, has been arrested together with the   zealous and conscientious   layman, Romas Žemaitis, who knew not only how to pray, but also how to stand up against lies and injustice.

We the undersigned faithful of Kybartai request the LSSR Prosecutor to take into consideration the facts we have set forth, to verify them, and to show that the arrests of Father Jonas Matulionis and Romas Žemaitis were a clumsy mistake which we ask you to correct immediately.

To: The Prosecutor General of the LSSR From: The Faithful of Lithuania

We consider the arrests of priests and of the most zealous laity as a persecution of religion and an insult to our most sacred convictions.