One greets each New Year with certain hopes, expectations and wishes. One wishes and trusts that the coming year will be better and more meaningful. Even among the customs of barely developed nations, various New Year's ceremonies prevail, with the help of which an attempt is made to ward off misfortune and evil spirits. No shadows are supposed to darken New Year's happiness.

Alas, 1986 brings the faithful of Lithuania not only happiness and a joyful, uplifting spirit, but also reminds them of one more painful anniversary on January 26, which we shall mark among many: It will be the third anniversary of Father Alfonsas Svarinskas' incarceration.

Three years are a very brief period in a person's life. However, it looks much different when these three years constitute the continuation of nineteen years of confinement. Of thirty-one years of Father Alfonsas Svarinskas' priesthood, eleven have been spent behind bars and barbed wire without the right to call himself not only a priest, but even a human being! He is a clerical extremist and calumniator, a dangerous criminal and the paid lackey of bourgeois ideology, a troublemaker and who knows what else; only not a priest, not a human being defending the truth, struggling for the affairs of God, and for the ideals of spiritual improvement.

Condemned by strangers, ridiculed and degraded even by some of his own brother clergy, nevertheless for thousands of the faithful and people of good will in Lithuania, he is a powerful, untiring icebreaker; guided and protected by God, supported by the prayers of loyalists, he has unswervingly broken and continues to break the ice of spiritual apathy, untruth, hatred and enforced atheism. His personal greatness is acknowledged even by the government atheists. All those earlier injunctions against seminarians visiting him, at the present time arranging commemorations of him, publicly praying for him, evaluating positively in sermons his activities and efforts, show that the guardians of the apparatus of force understand the power of Father Alfonsas Svarinskas' example and his effective influence upon seriously thinking people.

This is why they are trying at any cost to denigrate him, to hammer into people by force and by threats that Father Svarinskas is an enemy of the Soviet system, and that any defense of him can be treated as a political crime. The various expressions of falsehood trying to vilify the priest-prisoners and other prisoners and dissidents still appearing in the Soviet press look very sad. For instance, in the Kauno tiesa (Truth, Kaunas ed.)   daily,   not   long   ago,   one   such   mouthpiece   for   untruth,

Instructor in Marxism Jeselski, tried to show that the faithful themselves condemned the activities of Fathers Alfonsas Svarinskas and Sigitas Tamkevičius, that during the trial, the public turned its back on them and the like. It would be interesting to know what faithful and what public Jeselski is talking about.

Did those faithful turn their backs on Alfonsas Svarinskas who, risking their own well-being or even freedom, hounded in every way, and even terrorized, have written expressions of protest to various Soviet agencies and collected thousands of signatures under them? Have those thousands who have signed, demanding restoration of freedom to Father Alfonsas Svarinskas, left him completely alone in the tangle of falsehood? Has Father Svarinskas been rejected by that segment of the public which spent several days standing outside the courtroom suffering the arbitrariness, ridicule and even repressions of the KGB and the militia: the roundups, the forcible deportation scores of thousands of kilomenters beyond Vilnius, ten-day jail sentences, etc.?

Finally, do these priests and faithful who in many churches today pray for Father Alfonsas Svarinskas and other prisoners wish to hear or know nothing about him?

So what rejection of Father Alfonsas Svarinskas has this defender of "Soviet truth and reality" written about? Jeselski most probably had in mind those basic actors in the courtroom farce and that portion of the public (KGB and Party cadres) driven into the courtroom by force, which tried with its approving applause to drown out the voice of conscience regarding the unjust condemnation of a man. However, their efforts were in vai n!

The government atheists are thrown off-balance mostly by the firm unbreakable spirit, the complete trust in the protection of the Lord, and the unconditional surrender to the will of the Most High on the part of Father Alfonsas Svarinskas and the other prisoners, whether priests or lai ty. Oh how they would I ike to see them out of commission, bathing in tears of "repentence". Prisoners' letters indicate just the opposite, almost everyone of them refIecting gratitude to God for granting the opportunity to sacrifice, to perfect oneself and to be an example to others. The opportunity of witnessing to God is granted to everyone, rich and poor, scientist and plowman, the head of state and prisoner.

The place for fulfilling one's duties to God is also not exceptional, the altar and the house of prayer, family and work, prison   and   exile are all incomprehensible and immeasurable fields of human endeavor for the incarnation of divine thought. Christ, sending His apostles into the world said:

"...You will be hated by all on account of my name, but whoever perseveres to the end shall be saved..."

"...Do not fear those who kill the body but cannot kill the soul ..." Hence, no cry of despair or sorrow for lost life or freedom is   heard 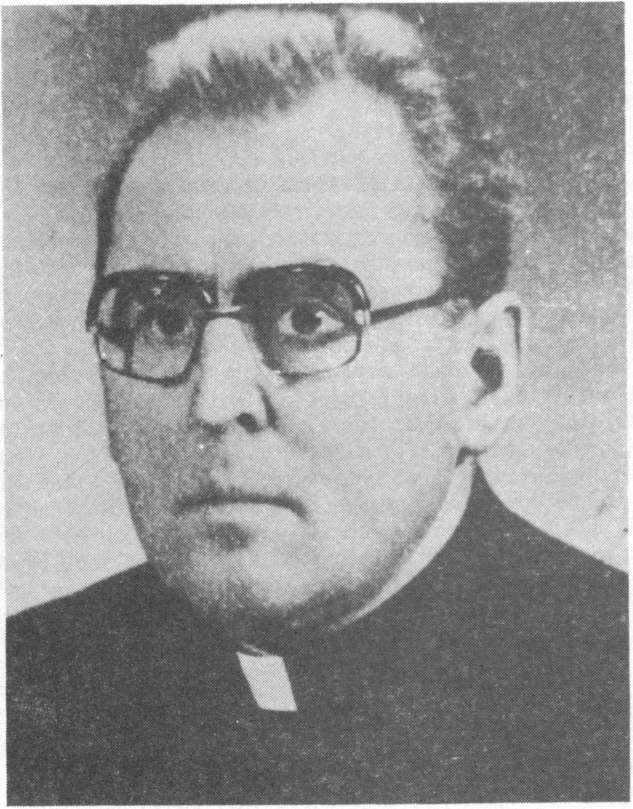 from the lips of a single prisoner. Perhaps not everyone is equally prepared to suffer physically the deprivations of incarceration, but their souls are peaceful and strong for they are strengthened and protected by Christ Himself, our Lord and our God!

Commemorating the anniversary of our parting with our honorable father, Alfonsas Svarinskas, let us lift our hearts to the Lord that we may be able to overcome fear and uncertainly, that we might draw determination and courage from the martyrs, and that we would always pray to the Holy Spi r i t.

"...Powerfully enlighten our minds and touch our hearts with your love so that our will might not break strengthen it with eternal power..."

Let us remember that Father Alfonsas Svarinskas and others bear the chains of the prisoner for   God,   the   Church   and   the   nation.   May   the