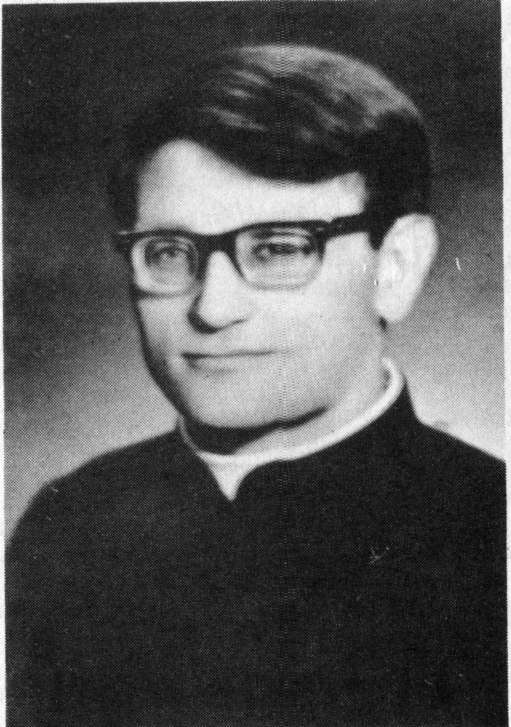 The KGB agents tried to convince the faithful that Father Kauneckas is a criminal, more dangerous than Father Alfonsas Svarinskas or Father Sigitas Tamkevičius, but very shrewd.

"We will take care of him even more shrewdly than we did those other priests: The witnesses in their cases were unbelievers, but against Father Kauneckas, only believers shall testify!"

The KGB tried to convince members of the parish committee that the priest disseminates the Chronicle. The chekists demanded, using the most terrible threats, that parishioners testify that they receive the Chronicle from Father Kauneckas.

They demanded that they testify thus, threatening them even with a poor future their children: they would never get into schools, they would be drafted into the army and sent to Afghanistan, etc. Similarly threatened were the members of the Adakavas church committee. Unable to withstand the blackmail, Chairman Lembutis and Secretary Lembutienė of the church committee of Adakavas resigned.

The chekists are trying to create an unbearable atmosphere for working and living for Father Kauneckas. On August 14, 1985, a militiaman came to the rectory and wrote up a complaint that living there unregistered and cooking for the priest was Miss Bronė Aputytė (she cannot register here since she has a government apartment in Gargždai). A few days later, a militiaman delivered a warning: if she did not register, she would be penalized. On August 29, Chairwoman Mrs. Bernikienė and Secretary Mrs. Karosienė of the Skaudvilė City Executive Committee prepared documentation for fining Miss Aputytė.

On August 30, she had to present herself to the Tauragė Militia, and give up her apartment in Gargždai.

But the militiamen who came that day did not find her at the rectory; she had already left for Gargždai. Even though Father Kauneckas was going to the town restaurant to eat, militiamen still sought Miss Aputytė several more times at the rectory.

During the parish retreat, December 14-15, some local women were preparing a meal in the rectory. The priest's sister-in-law and his a i Iing sister had come to visit. When the militia came, they frightened the priest's sister so badly that she had to see a doctor.

The KGB began pressuring those who drive the priest to the church in Adakavas which he serves, or elsewhere. Alfonsas Kamenskas, Aldofas Kumpikevičius, Juozas Dabulskis, Aleksas Ivanauskas, Rimantas Andruška, Remigijus Laugalis and Vytautas Neteckas, who had driven the priest at one time or another, were interrogated. The KGB summoned communal farm warehouseman Vytautas Neteckas, who worked as sacristan on Sundays at the church in Adakavas, to the Department of Motor Vehicles and other offices and, showing up at his workplace, they demanded that he come to the district center every Monday to describe the priest's sermon.

Neteckas developed a chronic disorder of the nervous system, resigned from his duties as warehouseman, and because of   illness,   he   lost   his chauffeur's license. In spite of that, he would sometimes drive the priest to Adakavas.

On January 18, 1986, Chairwoman Bernikiene of the Skaudvile City Executive Committee, telephoned militiaman Grubliauskas to stand by on Sunday to detain Father Kauneckas. KGB agent Vytautas Valantinavičius arrived In his automobile, and in the city square waited for Neteckas to drive by. Stopping him, he fined him 30 rubles and warned him that if he drove the priest back, the automobile would be confiscated. The chekist jeered: "Even though you chauffeur the pastor, even though you go to church, God does not help you. You lost your license, you paid a fine and you lost your automobile. Work for us doing what we tell you and you won't have to pay the fine and tomorrow you will get your license back..."

By all sorts of warnings, the KGB agent wanted to force organist Remigijus Laugalis to work for them. Now they summon him to the passport desk, now to the Department of Motor Vehicles or they come after him at home. During the summer of 1985, he took driving lessons. "You shall not get your license," warned the KGB agents. And as a matter of fact, Laugalis was not allowed to take the examinations. A 30 ruble fine was levied for driving without a license. After Mass at Adakavas, KGB agent Valantinavičius constantly shows up and watches to see how the organist r ides home.

On January 15, 1986, they waited for him outside the rectory in Adakavas. They looked for him at his in-laws, for when summoned, he did not go to the passport desk in Tauragė.

On January 11, 1986, KGB Chief Shevelev told his neighbors that soon Father Kauneckas would have to be arrested for showing slides in church. Talk about the arrest was spread quite widely, most likely for the purpose of creating an atmosphere of fear.

On March 12, 1986, all church committee members in the Rayon of Tauragė were summoned for a lecture. Here they were addressed by Ka2ukauskas, spokesman for the Commissioner for Religious Affairs. As usual, he explained the Regulat ions for Religious Associat ions. From the way in which Rayon Executive Committee Vice Chairwoman Mrs. Ulbiene spoke, it is clear that in the future, they plan to go after Father Kauneckas. Vice Chairwoman Ulbienė called the church in Skaudvilė "a hotbed of criminal activity".

Mrs. Ulbienė clearly felt that someone is trying to force the issue. For example, Father Kauneckas invites other priests to the church for devotions and retreats without informing the rayon Executive Committee or receiving its permission, thus transgressing the aforementioned Regulations, since a priest may function only in his own parish.

Father Kauneckas is demanding that the faithful sign temperence pledges (as a matter of fact, Father Kauneckas is not demanding such pledges, but what is wrong if he sometimes urges from the pulpit that those who are determined to live in sobriety register in the parish temperence book), that he showed slides in church, held a Christmas celebration in church, went to the cemetery to pray on All Souls' Day and there performed ceremonies. It is constantly emphasized that the pastor of Skaudvilė thus breaks the law (even though almost everywhere in   Lithuania priests do not ask permission to invite priests, they show slides, etc.)