600 YEARS HAVE BEEN KNEELING

The love of the Father of the Ages protects

The land of the Nemunas and Neris,

Under the Lithuanian roof

A new fire will now glow.

And the flames of altars burned,

Not to be conquered by storms.

Not the wildest winds shall root up,

Christ, our living love for you!

You conquered the world,

You are the ruler of Lithuania!

The cross helps to conquer,

If you carry it with Jesus.

Embracing the cross, we stride

Along the roads of joy and suffering

Never having disowned it,

We believe! God will not abandon us!

We have begun the jubilee year of 1987. What is the attitude of Catholic Lithuania as it begins the jubilee? Resolve, faithfulness, regardless of atheistic deceit. Even though belatedly received, Catholic baptism determined our nation's destiny during the past 600 years. The lateness of our baptism created conditions under which the Polish clergy had a disproportionate in­fluence on the ecclesiastical and cultural life of Lithuania. At the same time by its universality and its respect for national cultural values, that very Catholicism was the foundation upon which our national revival movement matured and ripened, in spite of an atmosphere of Czarist Russian terror.

Today, as we commemorate the jubilee of the baptism of Lithuania while in the grip of that same Russia's new empire, we must draw wisdom from the historical experience of the past six centuries, and especially from the strug­gles and the achievements of Catholic Lithuania at the end of the last century.

The primitive atheistic materialism which Lector J. Sakalauskas of the Central Committee of the Communist Party of Lithuania has been so zealously promoting during preparations for the jubilee, considers Catholic baptism to be the beginning of Lithuania's troubles, and sees the Russian oc­cupations -- both those of the last century and of this one — as eras of national "self-determination".

Every thinking Lithuanian is feels deeply that history is not on the side of the Party propagandists.

Describing in 1939 the 550th anniversary of the baptism of Lithuania as it was commemorated in independent Lithuania, Professor Stasys Šalkauskis wrote: "Having once done ourselves a disservice by delaying our bap­tism, surely we will not now be in a hurry to dissociate ourselves from its good effects just because the decadence of civilized nations is headed in that direc­tion? This would be like the fool in that story, who mourned during a wedding and chuckled at funerals."

As we commemorate the baptism received by Lithuania 600 years ago, the government atheists would like us to mourn, yet it was Catholic bap­tism which prevented a "fortunate" assimilation into that great Russian Or­thodox nation whose vast territories were once ruled by the Grand Dukes of Lithuania.

Atheists today would also like us to accept with complete admira­tion and joy the efforts of Czarist Russia and of the rulers of the contemporary Russian Empire to de-Catholicize and to de-nationalize Lithuania.

Even the more thinking Soviet scholars admit the groundlessness of these government atheist views. At the end of January this year, in the Library of the Rebuplic in Vilnius, a scientific conference was arranged, dedicated to the 600th anniversary of the introduction of Christianity into Lithuania. Speak­ing during the conference, philosopher B. Genzelis evaluated the significance of the introduction of Christianity to Lithuania thus: In the cultural sphere, the influence of Christianity has been positive: the cultural treasures accumulated by the Christian nations of Western Europe became accessible to Lithuania. The political significance was negative because of the increased national in­fluence of the Poles (although the fact that Catholic baptism lessened the danger of Lithuania becoming Russian was passed over), and in the religious sphere, the atheistic philosopher honorably refused to evaluate the significance of Lithuania's Catholic baptism since as a philosopher of the atheistic-materialis­tic school, he could not evaluate this objectively.

The lecturer mentioned a number of deficiencies in contemporary militant atheism. Having brought up a favorite term of the atheists — religious extremism — Doctor of Marxist Philosophy B. Genzelis affirmed that religious extremism had been generated by atheist extremism. He also emphasized that a great deal of harm had been done to the culture of Lithuania by the "bulldozer atheism" cultivated during the Soviet era when monuments of religious art were destroyed: wayside crosses and shrines in Lithuania, etc. "Bulldozer atheism" was not infrequently disseminated in printed atheistic propaganda published at the behest of the government.

Antanas Rybelis, a staff member of the Mintis (Thought) Publish­ing House, tried to counter, saying that atheistic literature of such a nature had not been published, but he himself admitted that the publishing house had not been able to push an objective collection of historical documents concerning the baptism of Lithuania past the barriers of government censorship. We had to be satisfied with the collection of extracts from the bulls of popes declaring crusades against pagan Lithuania tendentiously edited in the post-war years by confirmed atheist professor Pakarklis. As participants in the conference agreed almost unanimously, such an incomplete and biased publication really will not contribute to an objective evaluation of the significance of Christianity in the history of our nation.

The Catholics of Lithuania know that the conditions for such an objective evaluation do not exist in contemporary Lithuania ruled by the atheists, despite all the campaigns of reorganization and openness proclaimed by Mikhail Gorbachev. At the beginning of the jubilee year, Lithuania was visited by the new Vice Chairman for Catholic Affairs, Kuznetsov, of the Mos­cow Council for Religious Affairs. He is a trained member of the KGB, who served in the Soviet Embassy in Italy for seven years. Regardless of his polite smile, his visi. bodes no good for the Catholic Church in Lithuania. Kuznetsov tried to convince the bishops of Lithuania that their most important duty is to keep the believing public from any struggle for the rights of believers. The Catholics of Klaipėda, according to him, can be completely content with not having recovered the church built by the faithful themselves and unjustly taken away from them. Remodeling the little old church would suffice.

Bishops Vincentas Sladkevičius and Antanas Vaičius would be able to attend meetings of the Vatican Congregation of which they are mem­bers only when the y agree to be of service also to the atheistic government, get­ting more actively involved in the Friends of Peace movement.

The new Moscow "protector of the Catholics" was disturbed on account of the activities of religious orders in Lithuania, and he asked with some concern whether Opus Dei was not active in Lithuania.

The Rector of the Theological Seminary in Kaunas, back from consultations in Moscow, told the seminarians at the beginning of the jubilee year that Moscow was threatening even to close the last theological seminary for three reasons:

1. Some of the seminarians belong to religious orders; 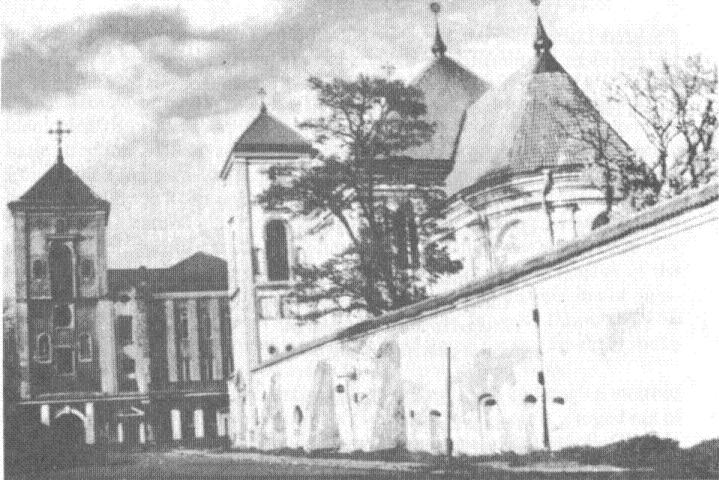 unity among the seminarians consists of seminarians publicly taking pledges of abstinence from alcohol);

3. Lithuanian spirit is alive in the seminary. Although the seminary supposedly prepares seminarians only for Lithuania, it should be more interna­tional in spirit, that is, the ranks of seminarians and professors should be thinned out with little-known individuals who, nevertheless would be more dedicated to the atheistic government. These are just a few examples indicating the contem­porary plight of the Catholic Church in Lithuania as it celebrates the 600th an­niversary of its beginnings.

One hundred years ago, the 500th anniversary of the baptism of Lithuania was commemorated during similarly difficult times of Czarist oppres­sion. In 1887, the jubilee fell between two memorable dates: the 1886 massacre of Kęstaičiai and the 1893 massacre of Kražiai. In spite of the painful trials of those times, the Catholic Church in Lithuania grew unusually strong during the past one hundred years: in its organizational aspect the Ecclesiastical Province of Lithuania was created, directly responsible to the Apostolic See; in the spiritual and cultural area, Catholicism sank its roots more deeply in Lithuanian hearts.

We trust that regardless of today's painful trials, God will allow Catholicism in Lithuania to wax and mature as we begin the seventh century of Christian Lithuania. Hence, in spite of the difficult conditions, repressions, and the sacrifices accumulated by the prisoners in jail, this jubilee year is a joyous year. We thank the Lord for everything, but especially for His way of the cross which He shares with us, leading to eternal resurrection!

But with the prayer of hope on our lips,

Oh God, You refresh us again!

Invited to the joy of heaven.

It will gain new strength.

In the stream of life.

For our faith and for baptism

Let this hymn be our thanks!