The jubilee year is past, upon which so many hopes had been pinned, and for which preparations had gone on for so long. Have those hopes and long­ings been justified? From a surface look, it would seem not. Most of the hopes were shattered.

Our Holy Father, John Paul II, never did come for the jubilee celebra­tion. The government atheists prevented the Holy Father from meeting with the Catholics of Lithuania. 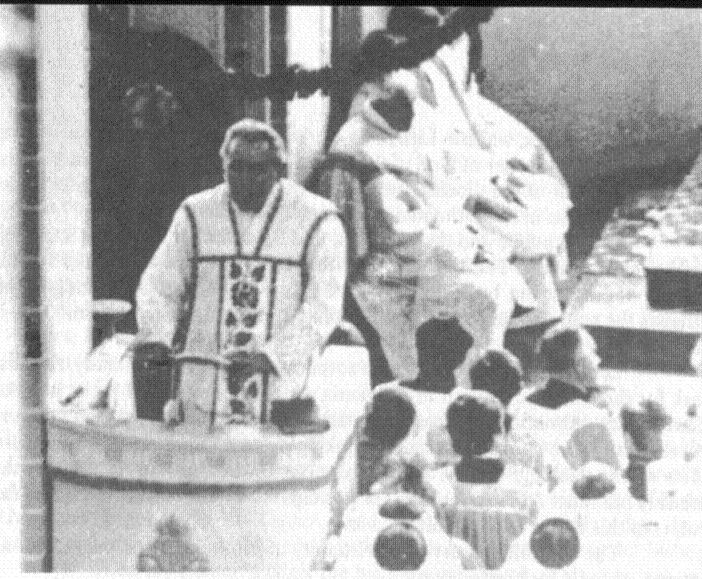 Some placed great hope in the "restructuring and democratization" taking place in the Soviet empire. Such individuals argued that no petition-sign­ing drive is necessary; the confiscated churches will be returned anyway and the imprisoned priests released. There was repeated postponement of the date for the return of Bishop Julijonas Steponavičius, Apostolic Administrator of the Archdiocese of Vilnius, from exile in Žagare to Vilnius. It was hoped that paragraphs of the Criminal Code, aimed at dissidents and believers, would be amended; that "more lenient" Regulations for Religious Associations would be issued; that the teaching of religion would not be forbidden, and that believing youth in school would cease to be persecuted.

This year of "restructuring", 1987, has ended, and as a result, the plight of the Church has in fact not changed. One or the other "concession" or "ges­ture of good-will" by the atheistic government, regardless of the fact that they have been publicized by mass media even abroad, are still on paper, e.g., the question of the return of the Church of the Queen of Peace in Klaipėda is still open: they are promising to return it in two years. It all depends on who oc­cupies the positions of power in the Soviet government in two years and what their policy toward the Church will be. Who knows how it will all end? So it is too early to rejoice over the return of the confiscated church of Klaipėda.

The question of the release of the priest-prisoners: In this area, the atheistic Soviet government has clearly demonstrated to the whole world whom it considers its worst enemy in contemporary Lithuania, namely, the Church and the clergy. In this era of restructuring and so-called democratization, they have left only the priests - Alfonsas Svarinskas and Sigitas Tamkevičius - in labor camp. The other Lithuanian dissidents are either free, or in exile.

The Church is not organizing overt demonstrations or other events in opposition to the Soviet government. But to the government atheists, it is more dangerous, since it undercuts the strength of atheism in the spiritual sphere, ur­ging the nation to remain faithful to Catholic traditions and morals, preserved and valued by their forebears for six hundred years.

That is the only reason why government atheists tried so strenuously to suppress the resonance of jubilee events, especially those which were nation­al in scope. Constant demands were made of the hierarchy and the pastors ofmore prestigious parishes that they guarantee that on the occasion of the jubilee, only the customary services be held. They succeeded, by threats and promises, in bending a number of the leaders and pastors of the Church in Lithuania to the way of compromise.

It was as if to say, let the Catholic public, stifled by the atheists, seek out for itself some more significant message concerning the 600-year-old his­tory of Christianity in Lithuania. Oh, how our people, our youth - limited in school only to an atheistic education - need such events through which the Christian spirit could be imbibed, so that six hunded years of loyalty to the Catholic faith would become both the treasure and a characteristic of the new generation of the seventh century of Christianity in Lithuania, that the hopes of the nation and of the Church for the future would be based not on "concessions expected" from the atheistic government, but on the firm foundation of Chris­tian morality and principles of faith in young hearts and souls.

The atheists this past year worked through all channels available to them to see that, in commemorating the jubilee of the baptism, the Bread of the Gospel would be offered to our hungry youth in unpalatable form, that is, in a way not understandable without special religious education and preparation -the services were held in the Latin language.

Is it not a paradox, that in Rome, the Holy Father, on the Feast of the Mother of Mercy of the Gates of Dawn, offers Mass for Lithuania in the

Lithuanian language, while in Lithuania, during the jubilee celebration, on that very Feast of the Mother of God of the Gates of Dawn, at the shrine in Vilnius, the administrator of the diocese forbids the priests assembled for concelebra-tion to offer Mass in the Lithuanian language.

Let the public and the youth not understand what the priest is saying, or how he is praying! The Bread of Spiritual Life is wrapped in stone! For al­legedly important but basically only promised concessions, hand over to the atheists the souls of the younger generation; don't struggle over them! This is the treachery of Satan!

Looking to the future, to the seventh century of Christianity, the first task for the Catholic Church in Lithuania which presents itself is the need to Christianize our nation's younger generation, which is being raised on atheism. A real war for the future of Lithuania is taking place in the young person's heart. How will he decide: For Christ, His Gospel, or for the "promises" made by the atheists but most often never kept, or perhaps for other trinkets tossed by the rulers of this world to their naive slaves.

The seventh century of Christianity in Lithuania must begin with an intense struggle for young hearts.

This year has been marked also by a bolder call by our fellow countrymen for "Freedom for Lithuania!" Every person, all the more the nation, has a natural desire for freedom. In this era of "restructuring" and "democratiza­tion", Lithuanians have publicly expressed to the leaders of the world and of the Soviet empire that freedom is precious to our nation.

1988 is a Marian Year. The traditions of the deep love for Mary in­stilled in the nation throughout 600 years invite everyone on this way of prayer and moral renewal - the way of freedom!