THE PRIESTS AND FAITHFUL OF LITHUANIA WRITE

To:   The People's Court of the Rayon of Raseiniai A Complaint from: Citizen Svarinskas, Alfonsas, son of Vaclovas, res. in Viduklė, at Šaltinio g. No. 1.

On March 20th of this year, I received a ruling dated March 16, 1982, from the Administrative Commission of the Rayon of Raseiniai Council of People's Deputies Executive Committee, stating:

"At 9:00 P.M. on February 20, 1982, the Pastor of the Viduklė religious community held a children's meeting in the rectory attended by some 30 children. About fifteen parents also attended this meeting. The students performed a play at the meeting. Those who participated in the play wore makeup and costumes depicting the characters. They thereby violated the May 12, 1966 Decree of the 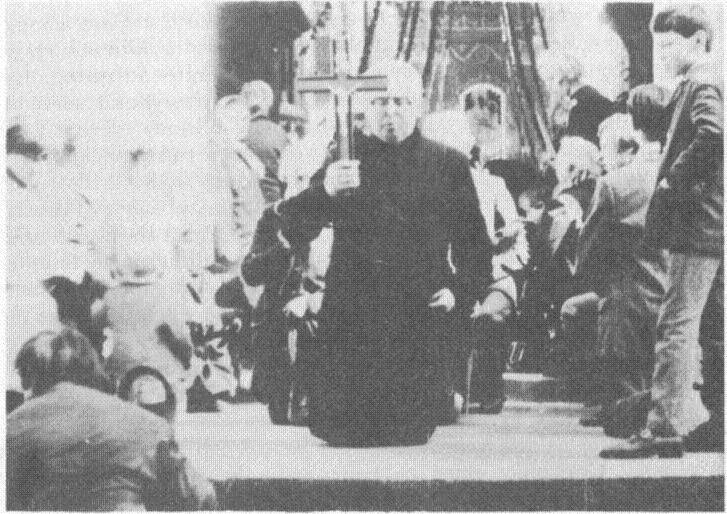 Father Alfonsas Svarinskas, Pastor of the Viduklė Church, leading services of atonement for the desecration of the Blessed Sacrament there in 1981. (See Chronicle of the Catholic Church in Lithuania, No. 49)

This ruling was legally unfounded and unjust. It was like this: After evening services on February 20, 1982, parents and their children came to the rectory for pre-Lenten pancakes. I don't know how many people were there for I did not count them. The numbers named in the report were invented from thin air! The parishioners wanted to spend a little time with their pastor: have some refreshments and fun. Unfortunately, the whole atmosphere was brutally disrupted. While dinner was being pre­pared (for the cooks had also attended the evening services), the people talked, told jokes and a child recited a poem. Shortly, through an open door, in walked Vidukle District Chairman Edmundas Kringelis, Militia Official 1st. Lieut. Butkus and two witnesses Jonas Remeikis and Edvardas Lybikis (who incidently was drunk!). They drafted a report against the pastor, alleging that thirty children were present and recited verse. When the pastor in­quired how they knew thirty children were present, the district chairman replied, "I wrote about." The administrative commission's ruling expands this charge and indicates the decree the pastor violated. On what basis did the administrative commission make such an exhaustive review of the "offense"? Did it avail itself of security police information?

I read the May 12, 1966 Decree in the LTSR Aukščiausios Tarybos ir Vyriausybės žinios (Bulletin of the Supreme Soviet and Government of the Lithuanian SSR) and pages 225 and 226 of the LTSR Baudžiamojo kodekso komentaras (Commentary on the Criminal Code of the Lithuanian SSR) and even with the help of a magnifying glass could find no paragraph which I could have deliberately or accidentaly violated. I think that even the court would search the decree for the necessary paragraph in vain.

It is usual legal practice to determine the offense and then seek the appropriate paragraph of law. Now an attempt is being made to apply an "offense" to the letter of the law.

Couldn't those who organized the raid on the rectory find more serious persons for this operation? E. Lybikis was expelled from the Party for drunkenness, as verified by the public. The Viduklė District Chairman can be aptly described by this last incident. One of those present in the rectory, (Mrs.) Vincenta Janušaus­kienė, remarked: "Why don't you draft a report against yourself since you continually drink in the firehouse?" This was enough to have two militiamen come in a truck on March 11th of this year (why outside militiamen and not the local militia officer is unclear), forcibly place three women — (Miss) Monika Gavėnaitė, (Mrs.) Vincenta Janušauskienė and (Mrs.) Solomėja Kaplanienė — inside and take them to the Raseiniai Militia on the pretext that the militia chief wished to talk to them . . .

It would seem that a written summons would have been suf­ficient and they would have gone there on their own. If they hoped to make a greater impression on the women through force, they were mistaken. The detained women saw the militia chief pass in the hallway, but he apparently knew nothing and paid no attention to them. Once again the militia resorted to lies: the chief was not in! Then why were they brought in if the chief was not in?

After the report was drafted, all three women were placed in a Volga and taken to the "People's Court of the Rayon of Rasei­niai. And each was fined 35 rubles. The reason: They had as­sailed Soviet officials with obscene language at the Viduklė rectory. Again they missed the mark: These women never swear. This can be corroborated by the fifteen parents present in the rectory and people with whom the women work and live.

In its ruling, the administrative commission writes: "Impose on citizen Svarinskas, Alfonsas, V., a 50-ruble administrative fine." You therefore confirm that I am a citizen. If I am a citizen, why am I forbidden to invite guests to my home to take refreshments, sing, enjoy ourselves and play games? We only wished to spend time productively and enjoy ourselves. We did not speak against the government!

We are guilty without any guilt.

Article 1 of the Universal Declaration of Human Rights states. "All human beings are born free and equal in dignity and rights. They are endowed with reason and conscience and should act toward one another in a spirit of brotherhood."

The above facts indicate that continual discrimination against Christians is assuming forms of terror.

I ask the court to strike down this ruling of the administrative commission and convince the atheists and Soviet officials of the Rayon of Raseiniai by acting thus with the faithful and by neglecting their real work, they compromise the Soviet government.

(P.S. The People's Court of the Rayon of Raseiniai found that Father Alfonsas Svarinskas was unjustly fined.)

To:   First Secretary Petras Griškevičius of the Central Committee

of the Communist Party of Lithuania A Statement   from   Father Kęstutis   Daknevičius, Assistant

I wish to draw your attention to the difficult situation which exists for believers in the Rayon of Kėdainiai. Lately, believers and their children have no peace either summer or winter.

Rayon Executive Committee Vice Chairman Juškevičius, with the help of Kėdainiai atheists, is terrorizing children in varied ways; fortunately, they have yet to employ physical torture . . .

During the summer, atheists often came to the church and stop­ped children at the church doors with various questions: What's your name? From what school? What grade?, etc. Parents were not given any peace either. Finally, they made a list of the children's names and turned it over to the prosecutor. The children were sum­moned to Assistant Prosecutor Gargasas and interrogated like criminals, while in fact, parents have the right to raise their children according to their convictions. The question arises: What crime against the state did the children commit by preparing for First Communion?

I personally was summoned twice — on November 25, 1981, and February 12, 1982 — to see that same Assistant Prosecutor Gargasas regarding the instruction of children. What crime did I commit by questioning the children on the catechism and explaining what they didn't understand?

Furthermore, newspapers publish mendacious articles, for ex­ample Tarybinis kelias (The Soviet Road), 1981, Nos. 37 and 56; and 1982, No. 9, distort a priest's thoughts and words in an attempt to make him "anti-Soviet" and set not only non-believers but also the faithful against him.

The faithful often come to me, as a priest, to recount their experiences . . . Parents complain that their children are intimidated in school, some who refuse to stop attending church are threatened with lower grades in various subjects and some have already had this happen. Parents are continually threatened and they therefore ask: "What should be done? Newspapers write about the 'freedom of belief. The Constitution also guarantees that freedom, while the officials of our rayon ignore it all and instigate discord by improper means, although the law forbids it."

Deeply upset, believers ask: "What about the future? When will such arbitrariness by rayon officials against the faithful and priests cease? We continually hear and read in newspapers how our priests are slandered, and we feel that this hatred is also spilling over on us rank-and-file believers."

Deeply concerned, believers ask: "Is it possible that our children's upbringing will be assumed by the vice chairman of the rayon executive committee and the prosecutor's office? Is it possible that we, the believers of the Rayon of Kėdainiai, have become second-class citizens?"

As a priest, I ask you, Mr. Secretary, to see to it that rayon officials cease using illegal methods against believers and stop preventing them from enjoying their Constitutional freedom to profess their faith because this brings no honor on either the ray­on or the state.

To: Chairman Brezhnev of the Supreme Soviet Presidium of the USSR

Copies to: The Council of Ministers of the Lithuanian SSR; Chairman Kuroyedov of the USSR Council for Religious Affairs.

A Statement from: The believers of Klaipėda

This is the sixth time we appeal to you, Mr. Chairman of the Supreme Soviet Presidium of the USSR, with the request that the Catholic church in Klaipėda which we built in 1961 with our funds and work be returned to us.

Construction on this church was begun in 1956, upon receipt of permits from the Supreme Soviet of the USSR and the Council of Ministers of the USSR as well as from the Council of Ministers of the Lithuanian SSR. The church the faithful built was con­fiscated in 1961 and converted into a philharmonic hall. In calling for the return of the Catholic church in Klaipėda, we sent the following petitions signed by Lithuanian faithful.

1.1974-to the Religious Affairs Commissar of the USSR, Kuroye­dov, bearing some 3,500 signatures;

4.1980 — to the Chairman of the Supreme Soviet Presidium of the USSR bearing over 600 signatures;

Klaipėda has about 190,000 believers. The Catholic churches in Nida and Juodkrantė were closed 20 years ago, therefore the city of Klaipėda and its surroundings comprise some 200,000 believers. The small 220 sq. m. (2,350 sq. ft.) church cannot accommodate the faithful: some faint due to poor ventilation and overcrowding while standing inside the church, others are forced to stand out­side. On principal holy days, the faithful overflow into the side streets.

Please rectify as soon as possible the injury done believers, and return the Klaipėda church to its rightful owners: the faithful.

We, the faithful of Klaipėda, will never renounce our church and will make every effort to obtain its return. Furthermore, this incident between the Soviet authorities and believers casts a negative pall on the prestige of the USSR in this country and abroad.

On December 15, 1981, Father Jonas Danyla S.J. sent the Central Committee of the Communist Party of Lithuania and the Vaga publishers a letter, requesting a reply to his September, 1980 protest against the lies and crude falsification of facts contained in the book published by Vaga, Be Iliuzijų (With No Illusions) by Bronius Jauniškis (See Chronicle of the Catholic Church in Lithuania, No. 52), because in their November 6, 1980 letter to Father Danyla, the Vaga publishers did not provide any serious answers and attempted to evade a direct response.

On March 30, 1982, J. Linkevičius, Editor-in-Chief of Lithuanian literature for children and youth at the Vaga publishers, again sent an even more abstract reply to Father Danyla's December 15, 1981 letter:

"Upon reviewing your third complaint regarding B. Jauniškis' book With No Illusions, the Vaga publishers have established that it merely contains a repetition of previous accusations, which were answered as unfounded on November 6, 1980, and there is no reason to return to them."