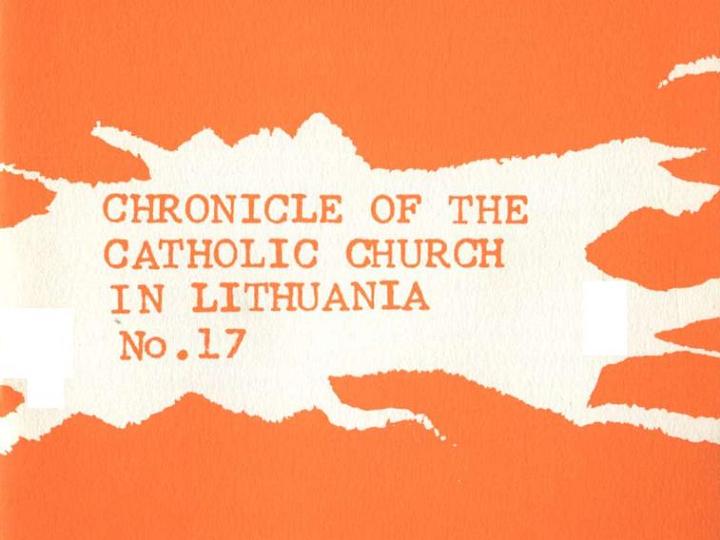 Nijolė Sadūnaiteėwas arrested on August 27, 1974. A search of her residence turned up a copy of the 11th issue of the Chronicle of the Catholic Church in Lithuania, which was being copied on a typewriter.

Since Miss Sadūnaitė refused to answer questions during the preliminary interrogation, the interrogators threatened to place her in a psychiatric hospital. She was not allowed to receive food packages for two months.

At the end of January 1975, Miss Sadūnaitė wrote a letter to the prosecutor, protesting the arbitrariness of the interrogators and their threats to place her in a psychiatric hospital.

In March of 1975, the interrogators inquired at the Vilnius Psychiatric Hospital on Vasaros Gatvė and the Psychoneurological hospital of Naujoji Vilnia, whether Miss Sadūnaitė had ever been treated there. The answers received were in the negative.

The Supreme Court of the Lithuanian SSR began considering the

case of Nijolė Sadūnaitė on June 16, 1975. The session began at 10 A.M. It was chaired by Kudiriashov; the State Prosecutor was Bakučionis.

To the General Secretary of the Communist Party Central

The Catholics of Lithuania suffer greatly, because they lack reli­gious literature. It is true that the following books were published during the years of Soviet rule: A Prayerbook by Monsignor J.(uozas) Stankevičius, ALiturgical Prayerbook, The Decrees of Vatican II, The Ritual, The New Testament, The Psalmto. They did not satisfy the needs of the faithful, since the editions were so limited that they were useful only to the atheists, who in their propaganda abroad state that "we also have religious freedom." "For example, the parish of Ceikiniai, with a membership of 3,000 faithful, received only ten copies of the New Testament.

In response to the dearth of religious literature, a number of people, realizing that freedom of religion and freedom of press are guaranteed by Article 135 of the Constitution of the Soviet Union and Article 97 of the Constitution of the Lithuanian SSR, and also that the government of the Lithuanian SSR, in violation of the above laws, does not permit the Catholics of Lithuania to publish religious books, decided to publish and distribute prayer-books secretly. Some were arrested in 1973. In December of 1974, the Supreme Court of the Lithuanian SSR sentenced P.(aulius) Petronis to four years in a strict regime labor camp, P.(etras) Plumpa to eight years in a strict regime labor camp, J.(onas) Stašaitis to a year in prison, and V.(irgilijus) Jaugelis to two years in a standard regime labor camp.

Lithuanian SSR To Dr. R.(omualdas) Krikščiūnas, Bishop of Panevėžys. To the Deputy of the Commission for Religious Affairs K.

Tumėnas To the State Security Committee

By the Rev. Balys A. Babrauskas, a resident of Kričinas in the Rayon of Pasvalys

Elections to the Supreme Soviet of the USSR will be held on June 15 of this year. Citizens have the right and obligation to participate. However, I, as a priest of the Catholic Church, have been discriminated against more than once by officials of the State Security organs and the Rayon and I have been treated as if I were beyond the law. I appealed to the State Security Com­mittee in Vilnius and to the Minister of Justice in defense of my rights, and mentioned the violations of the law being committed by certain officials, but I received no concrete answer and received no protection. As the result of an entire chain of events (which I shall mention below) I refused to vote, as a citizen who has no rights, but only obligations.

On November 20, 1973, a group ot Security agents, under the leadership of Captain Jasinskas, while carrying out a search, grossly violated Article 192 of the Criminal Code of the Lithuanian SSR, which states the following: "All of the items seized and docu­ments must be noted in the minutes of the search or in an attached list, noting their amount and size." The Security people did not note the seized items either in the minutes or in an attached list.

I was interrogated twice (11/21/73 and 8/2/74), as if I were being charged (being hungry I took some preferred food, that is, with the religious press being prohibited, I accepted the books given me), while in the minutes and in their statements they said I was being interrogated as a witness. I did not understand the answer to one question and they did not answer it, namely: "About whose criminal activity was I supposed to testify?" For that reason I renounce my signatures on (the minutes of) the interrogation, since I consider them both illegal.

The Chronicle of the Catholic Church in Lithuania is publishing ideas being circulated in writing and reflect the thoughts and feelings of numerous Lithuanians.

"Thirty years have passed since the fires of war were ex­tinguished. That should be cause for joy, but the Lithuanians have cause to be sad. The land of the River Nemunas, like a doormat, has been oppressed by both East and West. The latter proclaimed a "thousand year Reich," while now there is talk of an eternal one. The brown "liberators" planned to move the "un­worthy Lithuanians" to the Urals, the reds set about to do even more—to scatter the Lithuanians throughout Siberia. It is difficult to find a family in our nation which does not have a relative who "voluntarily" went to "see the white bears". The families of the deportees of 1941 were scattered: the men were separated from the rest. The twentieth-century exploiters of slavery chose those able to work from among the deportees and gave them 400 grams of bread daily, while the others had to make due with 200. Infants die not only in drought ravaged Africa, but also in the land of communist humanism, where a certain category of people were turned into slaves. A Lithuanian deportee used to be told the following: "You were brought here to die!" That was not an empty phrase—the bones of children born to Lithuanian mothers are scattered from the Urals to Magadan, from the freezing areas of Archangel, Vorkuta and Norilsk to the heat of Kasakhstan.

There was a plan to establish a Lithuania without Lithuanians, who were to meet the same fate as the Kalmyks, Tartars and other small nations which were deported and disappeared in the "melting pot of brotherly nations." Fortunately, this "historical process" was interrupted by the death of Stalin, which resulted in a relative easing of the situation—coarse physical genocide was rejected and replaced by moral genocide.

Lithuania arose from the ruins of war, but not the Lithuania envisioned in the treaty signed on July 12, 1920 in Moscow. Soviet Russia does not observe its own treaties: 20,000 square kilometers were separated from Lithuania and given to Byelorussia and Poland. 40,000 Lithuanians, who had their own Lithuanian schools while under Polish occupation, are dead as far as the Lithua­nian nation is concerned. These who attempted to fight for the right to an education in Lithuanian, experienced the heavy hand of Minsk.

On May 21, 1975, Vytautas Kabelis, the principal of the Balys Dvarionas Children's Music School of Vilnius and Jonas Urba, the party secretary at the school, summoned the music teacher (Miss) Aldona Kezytė, who teaches the required piano class to the students in the Choral Department and ordered her to prepare a state­ment, that showed voluntarily resigning her position as a teacher.

The principal stated that he had no complaint about teacher Al­dona Kezytė's work, but he had been instructed to discharge her since she was too religious.

A few days later Miss Kezytė prepared the statement and was forced to leave her position. She had spent about 25 years at the school and was cited by the administration several times for her good work. Several times she had even received commendations from the government for her work.

In discharging Miss Kezytė, the administration of the school stated that thereafter she had no right even to set foot inside the school.

To the Ministry of Education of the Lithuanian SSR

(From) Citizen Irena Smetonienė, daughter of Jonas, a surgeon's assistant, residing in the Village of Svilonėliai, Užusaliai Area, Jonava Rayon

On February 14, 1975 there was a class meeting of grade VIII b of the Karmėlava High School. During the course of the meeting, my son began to doubt in "that sweet word — freedom". He began arguing that there is no freedom.

NOT FOR PUBLICATION IN THE PRESS

Concerning the closing of the Vilnius children's tuberculosis sanatorium "Vilnelė" and the establishment of the Vilnius municipal skin and venereal disease health center.

An increase in the number of hospital beds provided for in the plan for 1975 (as follows):

Fro the Department of Health of the City of Vil nius—200 beds;

For the Department of Health of the City of Kaunas—100 beds;

For the Department of Health of the City of Šiauliai—45 beds,

with a reduction in the number of beds in the hospitals run by the Ministry of Health on the republic level.

An increase in budgetary appropriations for the operation of agencies where treatment and prevention activities (are carried out):

For the Department of Health of the City of Vilnius— 306,500 rubles, with 30,100 rubles being allocated for salaries.