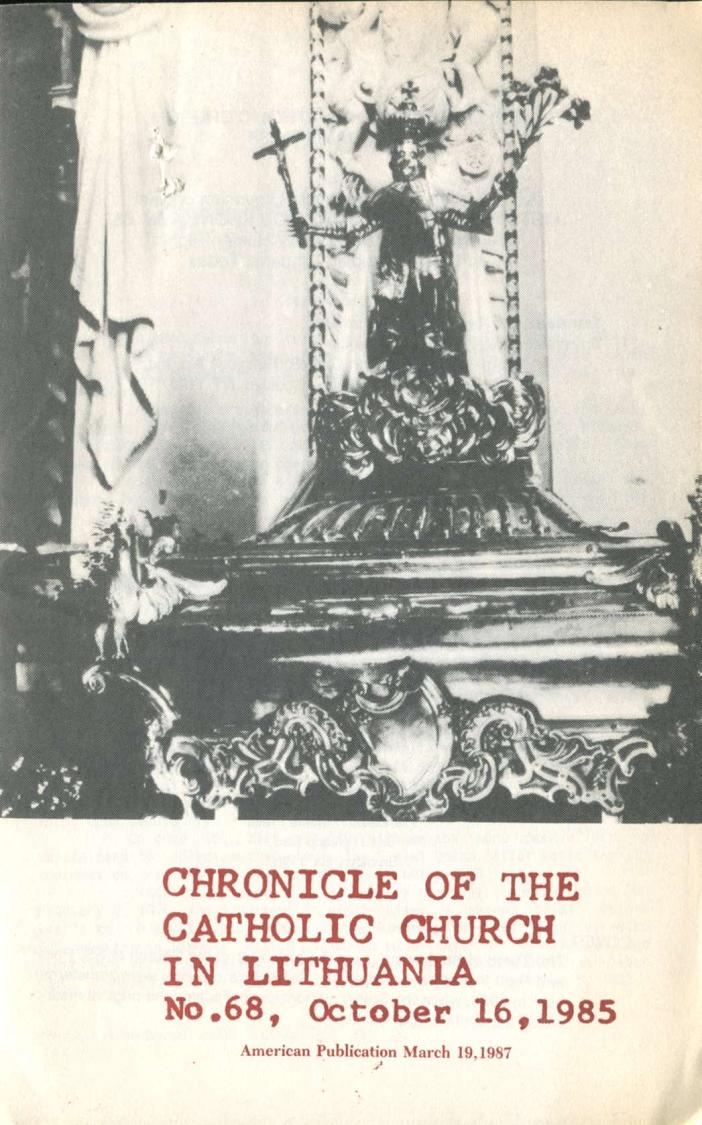 Read this and pass i t on!

If you can, reproduce It!

CHRONICLE OF THE CATHOLIC CHURCH IN LITHUANIA, No. 68

4. From the Trial of Vladas Lapienis:

B. Decision of the Court

5. Thoughts Upon Reading the Articles by J. Kazlauskas and V. Balkevičius Entitled

9. Catholics In the Soviet Republics

Christ, speaking of the Church and of persecutions befalling her children has uttered these words, "For false Christs and false prophets will arise and produce signs and portents to deceive the elect, if that were possible. You therefore must be on your guard. I have forewarned you of everything." (Mark 17,22-23)

At difficult periods in the history of the Church, it is worth meditating often on these words of Jesus, against the background of everyday events. Recalling these words, let us try to consider one or the other event from our times, especially those which bring more disquiet to the heart of a believing Lithuanian.

It is said that the atheistic government has a special division for spreading deliberate disinformation and rumors. The bigger and more significant the fish hooked on their disinformation, the greater the pleasure of the Church's enemies.

THE JUBILEE OF LITHUANIA'S BAPTISM APPROACHES

Preliminary Plan of   the   Jubilee Corrrnission   submitted   to   the Lithuanian Conference of Bishops, February, 1985.

I. Overview of the Triennial Celebration

1.The program set forth in the first letter of the Bishops and Administrators of Lithuanian Dioceses should set the tone for the activities of all Lithuanian Church leaders, especially on visits to parishes and shrines, deanery visitations and accountings, conferences to seminarians, retreats to priests and laity, sermon themes and pastoral work as a whole, as well as restoration of churches.

2.Schedule for the First Year of the Triennial Celebration: a. On March 3, 1985, on the Eve of the Feast of Saint Casimir, the first pastoral letter is to be read, beginning the Year of the Good News.

b. During Lenten sermons of 1985, attention is to be called to the value of Baptismal grace and the gift of Faith.

We thank the Trinitarian Order in America for the solidarity they have expressed with Lithuanian prisoners of conscience. Beside the the relics of Saint Casimir, Patron Saint of Lithuania, which have been exiled from the Cathedral of Vilnius to the Church of SS. Peter and Paul in Antakalnis, stands a statue of Jesus of Nazareth, beloved by our folk, which came from the church (now closed) once belonging to your order. May these symbolic exiles continue further to unite us in common cause and in efforts that the strength of Christian love might triumph over force and deceit.

FROM THE TRIAL OF VLADAS LAPIENIS

The defense speech and final statement of Vladas Lapienis, spoken in the Supreme Court of the LSSR, March 28, 1985:

Similarly, Par. 19 of   the   Universal   Declaration   of   Human   Rights explains: "Everyone has the right to freedom of opinion and expression; this right includes freedom to hold opinions without interference and to seek, receive and impart information and ideas through any media and regardless of frontiers."

Par. 49 of the USSR Constitution: "It is forbidden to persecute anyone for criticizing," while Par. 57 proclaims that, "To honor citizens' property and to safeguard their rights is the duty of all government organizations and officials." The Constitution, after all, possesses the highest power, so no laws can contradict it.

In my work, I was guided by Natural Law, by the Constitution of the country, especially Par. 34, 39, 50, 52, and other Soviet laws, the Universal Declaration of Human Rights, and especially Par. 2, 19, 28, 30, international covenants regarding civil rights, and other documents concerning human rights and basic freedoms.

THOUGHTS UPON READING THE ARTICLES BY J. KAZLAUSKAS AND V. BALKEVIČIUS ENTITLED "THE MAKING OF A HOLIER-THAN-THOU" AND "THE MEANING OF JESUITICAL TRUTH"

Upon reading the aforesaid articles, one gets the impression that the authors, carrying out someone's instructions or commission, are regrettably stubborly and feverishly fabricating a lie. Such "scientifically produced arguments" really do no honor to them, all the more because those who commissioned it always prefer to remain obscure --let someone else be embarrassed in the eyes of the public, decent people or students.

Attention should be paid to this by all those who assume the title of philosopher. Teaching and studying a one-sided, single part philosophy does not mean that we have grounds for calling ourselves philosophers, and Balkevičius himself does not deny that he represents a so-called philosophy by a position of force. It does not take special training to understand the meaning of such a "philosophical" nuance, which Balkevičius attributes to Father Jonas Danyla, in his article, "The Meaning of Jesuitical Truth":

...Your visit has been postponed to next year (it should have been September 9). Such is God's will! I am happy and in good spirits. (For two years now, I have had neither a long nor a short visit!) I am alive and well. On Sundays I rest: I sleep a couple of hours longer, read and pray. For everything I am grateful to the Lord God. Life has been good to me. God grant that we wiI I all meet in heaven, and together with all the powers of heaven, sing "Holy, holy..." 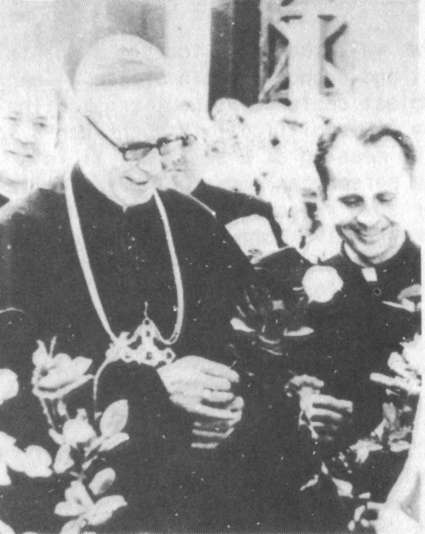 People always respond to love with love, especially children and youth. Love of God and people is the eternal virtue, for Faith and Hope go only as far as the gates of heaven.

In the beginning of September, 1985, the Rector of Kaunas Theological Seminary, Rev. Dr. Vytautas Butkus, warned the seminarians that there should not be any religious books in the seminary except course outlines, "These will be quite enough for you as priests-to-be," said the rector.

Reminding them that two seminarians had been expelled by the seminary administration at the beginning of the summer for reproducing religious books (presently they have been reinstated), the rector asserted that Lithuanian religious books are of dubious value, and asked whether it would not be better to study foreign languages. Obviously the rector spoke thus coerced by the atheistic government, a government which is constantly boasting to the world that in the USSR there are theological seminaries. What would the atheists say if they were allowed to study Marxist philosophy only from class notes, without the help of texts? For the formation of future priests, not only is a fund of specialized theological information important, but also interior formation, and for this, good religious literature is necessary for spiritual reading.

At the beginning of 1985, the underground group of the Catholic Committee for the Defense of Believers' Rights sent two protests to government organs.

To:   The LSSR Council of Ministers

From:   Parents and Relatives of Pupils in the City of Gargždai, Klaipėda Rayon

We, the parents, grandparents and friends of the school children, come to you with a very important question:

On February 16, Principal Jacikas of Gargždai Middle School I, summoned Fourth Class pupil Saulius Lingevičius read him names some names from a list and asked the pupil which of those children went to church. Some of them, the boy identified.

Lingevičius told his friends about his interview wi th the principal. Our children learned of the list which had been drawn up, and from them, we found out. Such behavior on the part of the principal shocked us greatly; he is preparing, through the homeroom teachers and in other ways, to persecute our children for going to church.

CATHOLICS IN THE SOVIET REPUBLICS

On May 13-16, 1985, Father Josef Svidnicky, a Ukrainian Catholic priest, who had worked in Zhitomir, Dushamb and Novosibirsk, was arrested in Apr i1, 1984.

During the trial, Father Svidnicky was confronted with the main accusations: The organizing of ecumenical groups (of Catholics and members of other denominations), the reproduction and dissemination of a small book about the apparition of the Mother of God at Fatima, and the catechizing of the young. Father Svidnicky's entire work is described as a calumniation of Soviet reality.

At the beginning of the trial, the court reporter announced that the case would be heard in a closed session of the court, therefore no one would be admitted into the courtroom. The last day, at the pronouncement of the verdict, all who wished to get into the courtroom were allowed in. Making use of this, the court announced that the case of Father Svidnicky had been tried in an open session of the court. The Prosecutor offered to give the accused 2.5 years deprivation of freedom. The court gave the longest sentence to Father Svidnicky: 3 years of imprisonment and confiscation of property, sentence to be carried out in a common regime camp.

Aušra ( Dawn ), No. 47 (87), In February, 1985, the underground publication Aušra No. 47 (87) appeared. In the publication, biographical material was presented regarding the death of Angelė Račaitė-Paškauskienė, who sacrificed her life on the altar of service to God and country. Attention is called to new assaults by the KGB against those who think differently: the trial of Father Jonas-Kąstytis Matulionis and of Romas Žemaitis, and the attempt, at night, to assault former Docent Antanas Patackas as he was walking down the street.

Much attention is paid to the commemoration of February 16. Along with other articles written on this theme, the February 17, 1985 broadcast of the Voice of America is printed, dedicated to commemorating February 16. Not overlooked in the publication are notable national activists and leaders who, by their efforts and work had contributed to the revival of Lithuania: S. Stulginskis, signer of the Declaration of Independence; M. Pečulionis, P. Klimas, etc.

In the article entitled "The Wound of Injustice Continues to Bleed", the trial of Father Sigitas Tamkevičius is recalled, and the innocence of the one on trial is logically proven.