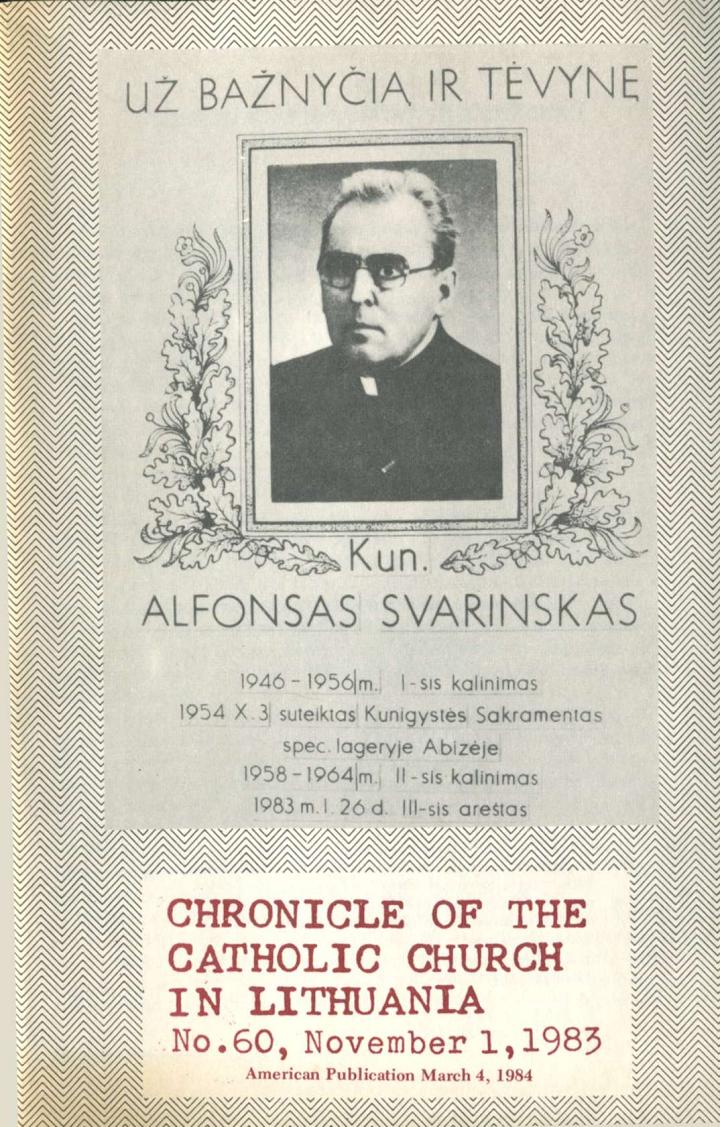 Read this and pass it on! Appearing since 1972

This issue is dedicated to prisoners of conscience and political prisoners Anastazas Janulis and Vytautas Vaičiūnas on their return from the Gulag.

CHRONICLE OF THE CATHOLIC CHURCH IN LITHUANIA, No. 60

1. The Catholic Committee for the Defense of Believers'

Rights Marks the Fifth Anniversary of its Establishment

2. Greetings from the Faithful of Lithuania to Pope John Paul II

on His Twenty-five Years as a Bishop

3. Persecution of the Church in Lithuania Stedily Intensifies,

Unrest in the Nation Steadily Grows

4.   The Protests Do Not Diminish

5. The Persecuted Church of Lithuania Prays More and More Fervently

6.   We Are Grateful for Their Sacrifice!

7.   It Is Impossible to Sentence the Truth

Reasons for the Establishment of the Committee

The Catholic Church in Lithuania, making a recovery after the difficult era of Stalin's regime, tied once again to obtain the most elementary of rights, the right to live. Catechizing of children began in the churches, young children and youths were allowed to serve Mass and participate in adoration of the Blessed Sacra­ment; the demand was made that the Soviet government return confiscated churches. In reaction to the catechizing of children, the government arrested Fathers Šeškevičius and Zdebskis; the requests of the faithful for the return of the church in Klaipėda and other churches were answered with sarcasm or the silence of the grave; children and youth actively participating in church ceremonies were terrorized in school and at work.

Such a situation in the Church could not but move zealous priests, dedicated to God and country. Methods had to be found to defend those unjustly suffering. Someone had to stand in the front lines in defense of others, thus on November 13, 1978, following the example of the Moscow Christian Committee, the Catholic Committee for the Defense of Believers' Rights was established in Lithuania. The first members of the committee were Fathers: Jonas Kauneckas, Alfonsas Svarinskas, Vincas Vėlavičius, Sigitas Tamkevičius and Juozas Zdebskis.

Together with our shepherds and all our priests, we the faithful of Lithuania most cordially greet you Holy Father, working for a quarter of a century, honorably, courageously, faithfully with the episcopal power granted you in the name of the holy Apostles, Peter and Paul.

Today, not one of us from the land of Nemunas is able to kneel at the foot of your honorable throne, so in our hearts we kneel there, expressing our deepest homage and gratitude for your concern and attention shown to our small nation.

In thanksgiving, and in petition for further blessings upon you, we offer to the Heavenly Father the unbloody sacrifice of His Son, Jesus Christ, joining to it the sufferings of the martyrs in Siberia and the current sufferings of our fellow countrymen for the Church and for the homeland, and for freedom of religion and conscience. May it be a symbol of gratitude, homage and fidelity to the Holy See.

The Faithful of Lithuania

PERSECUTION OF THE CHURCH IN LITHUANIA STEADILY INTENSIFIES, UNREST IN THE NATION STEADILY GROWS

On May 17, 1983, the Deans and Vice-deans of the Archdiocese of Kaunas and the Diocese of Vilkaviškis were summoned to the Kaunas Archdiocesan Chancery to listen to instructions from Petras Anilio-nis, Commissioner of the Council for Religious Affairs.

The commissioner's talk centered around petitions sent between July and October of the past year (1983) to the Soviet government by priests of Lithuania. An appropriate official from the Moscow Council of Religious Affairs had come to Lithuania in February to consider the petitions. Here he met with the bishops of Lithuania, visited the seminary and delegated Petras Anilionis to meet with the deans.

Since the demands of the petitions sent from the various dioceses of Lithuania were similar, Anilionis came to the conclusion and affirmed that they had been inspired from some central source. At the beginning of the meeting, the commissioner cited Par. 50 of the Soviet Constitution, where it is written that citizens of the LSSR are guaranteed freedom of conscience to profess any religion, or not to profess any; to carry out religious cult or to conduct atheistic propaganda.

THE PROTESTS DO NOT DIMINISH

To:   The General Secretary of the CPSU and Chairman of the Supreme Soviet of the USSR, Yuri Andropov

From:   Priests of the Archdiocese of Kaunas

The priests and faithful of Lithuania were very shaken by the actions of the government against the Catholic Church in Lithuania, in arresting and trying Fathers Alfonsas Svarinskas and Sigitas Tamkevičius.

Our press, in reporting the trial, did not indicate a single offense against the state or its system for which Father Alfonsas Svarinskas was on trial. The so-called crimes which were described were purely religious activities which did no harm to the state.

The arrested priests, as members of the Committee for the Defense of Believers' Rights, in the documents submitted to the appropriate state organs, also did not utter a single word against the state or its system, but merely published facts showing discrimina­tion against the faithful in various areas of life. Their entire activity consisted of publicizing the arbitrariness of the atheists, which offends the sensitivities of the faithful. Can the publication of those instances of arbitrariness be considered vilification of the state, liable to punishment?

THE PERSECUTED CHURCH OF LITHUANIA PRAYS MORE AND MORE FERVENTLY

In Lithuania, the Feast of the Nativity of Mary is com­memorated with solemn services in more than one parish, and the most famous celebrations of this feast take place at Šiluva and Trakai.

This year, between forty-five and fifty thousand devotees from all over Lithuania and neighboring republics participated in the religious festival at Šiluva. Crowds of the faithful with rosary in hand proceeded on their knees around the Marian altar in the chapel throughout the eight -day period, asking the Mother of God for pro­tection for themselves and the persecuted Church in Lithuania. Holy Communion was distributed to the faithful, not only in the church and in the chapel, but also in the churchyard. Forty thousand people received Communion.

On Sunday, September 11, the main day of the- festival, Holy Mass was offered by Bishops Liudvikas Povilonis and Romualdas Krikščiūnas. After the services many of the faithful, among them a large number of the youth, proceeded on their knees from the high altar and around the church, praying the rosary. Leading the faithful were Fathers Vaclovas Stakėnas and Leonas Kalinauskas. The past two years, the procession was led by Father Alfonsas Svarinskas.

WE ARE GRATEFUL FOR THEIR SACRIFICE!

On September 24, 1983, Engineer Vytautas Vaičiūnas was released from Bakal Labor Camp, after serving his sentence. At the camp, the revered prisoner was met by his brother and by youth who had come from Lithuania. When he arrived back in the land of his fathers, he was warmly greeted by young people and his friends. Engineer Vaičiūnas returned tired but strong of spirit. It had been a general regime camp. On account of unsanitary conditions and hoardes of parasites, there had been repeated epidemics of dysentery which the engineer barely survived.

On July 27, 1983, Anastazas Janulis was taken by transport from the camp in Barashevo to the transfer point in Perm, from where he was allowed to return to Lithuania, July 29, once his documents had been put in order. Upon his return to Lithuania, Janulis took lodgings at the abovementioned address in Kaišiadorys.

On August 2, when he went to the Kaišiadorys Passport Section to register, the official at the pasport desk, apparently informed 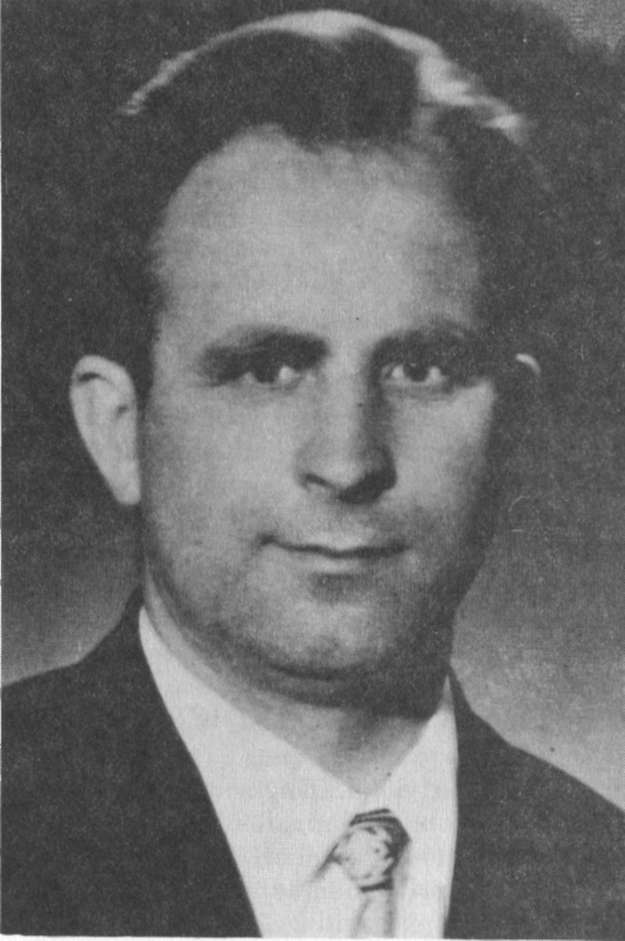 in advance about the impending visit of Janulis, sent him to the director, and she sent him to the Office of the Chief Inspector of Criminal Investigation. After he had taken care of his papers, the chief inspector openly stated that Janulis would be watched, and he gave him to understand that it depended on his own behavior, whether he would be assigned an administrative overseer.

IT IS IMPOSSIBLE TO SENTENCE THE TRUTH

At 10:00 AM on May 16, 1983, in the Supreme Court of Vilnius, the trial of Mrs. Jadvyga Bieliauskienė, a resident of Garliava, began. Mrs. Bieliauskienė was accused of collecting signatures under a peti­tion to Petras Griškevičius, First Secretary of the Central Com­mittee of the Communist Party, regarding the persecution of youth who are religious believers, of working with the Chronicle of the Catholic Church in Lithuania, organizing children in groups and organizing plays with a nationalist content.

Almost all the children and youths testifying as witnesses in the trial characterized Mrs. Bieliauskienė as a very good woman of high moral standards who is a religious believer. Principal Nausėda of Garliava Middle School I, said in his testimony that he was not acquainted with Mrs. Bieliauskienė, but since 1979, he had noticed that in the school which he administers, pupils from various grades, that is, of different ages, were getting together. Information was received that pupils who were religious believers gather together to celebrate birthdays. A resolution was passed that at such gather­ings one of the teachers must be present.

The principal mentioned how some pupils — the Gluoksnys children, and Artur Slepkov — had resigned from the Communist Youth League. In his speech, he devoted quite a bit of attention to Mindaugas Babonas, describing how Mindaugas, in his schoolwork, had begun to capitalize "God". To warnings from teachers that this is a common noun and should not be capitalized, he replied, "It may be a common noun for you, but for me, it is a proper noun."

The chekists, letting Bishop Steponavičius out for lunch break, retained his passport and ordered him to report at 3:00 PM to the KGB. After lunch, the interrogator and one other chekist faulted and lectured Bishop Steponavičius for receiving priests, believers and other visitors, and scolded him for supporting the Catholic Committee for the Defense of Believers' Rights and the underground publication, the Chronicle. He asked why the bishop did not want to live in peace, why he worried about matters which did not concern him, etc. This talk lasted 1.5 hours.

July 28 - 31, 1983, many telegrams carrying feast day greetings, addressed to the arrested Father Sigitas Tamkevičius, Pastor of the parish of Kybartai and member of the Catholic Committee for the Defense of Believers' Rights, were sent to the Vilnius KGB from Kybartai, Vilkaviškis, Kapsukas and elsewhere in Lithuania. The 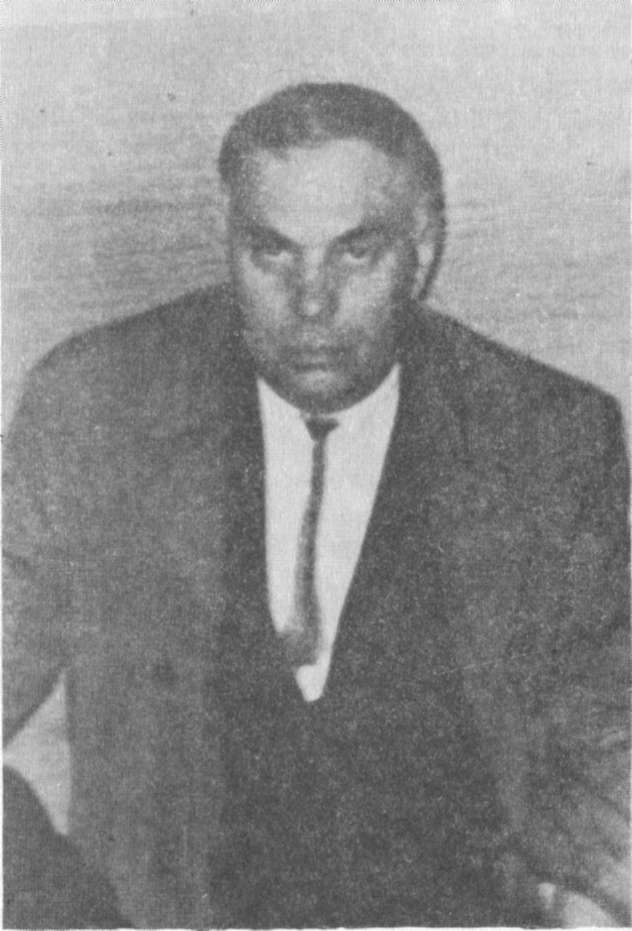 faithful wished at least with a modest card and a few warm words, to express their love and respect for the priest being held in the KGB Isolation Prison. However, almost all the telegrams were returned to the senders, with a notation, "Addressee Unknown".

During the night of July 9, 1983, unknown culprits again tore up the Wayside Shrine standing in the churchyard, and carried off the newly installed image of the Rūpintojėlis ("The Pensive Christ).

During the night of April 20-21, 1983, the images of two kneeling angels and of the Sorrowful Mother of God, carved from wood by an unknown folk artist, were stolen from the Wayside Shrine in the Viešvėnai churchyard.