THE CHRONICLE OF THE CATHOLIC CHURCH IN LITHUANIA No. 24

The "Truth" about the Catholic Church in Lithuania Intended for Foreigners

Complaint by the Rev. Z. Naciunskas 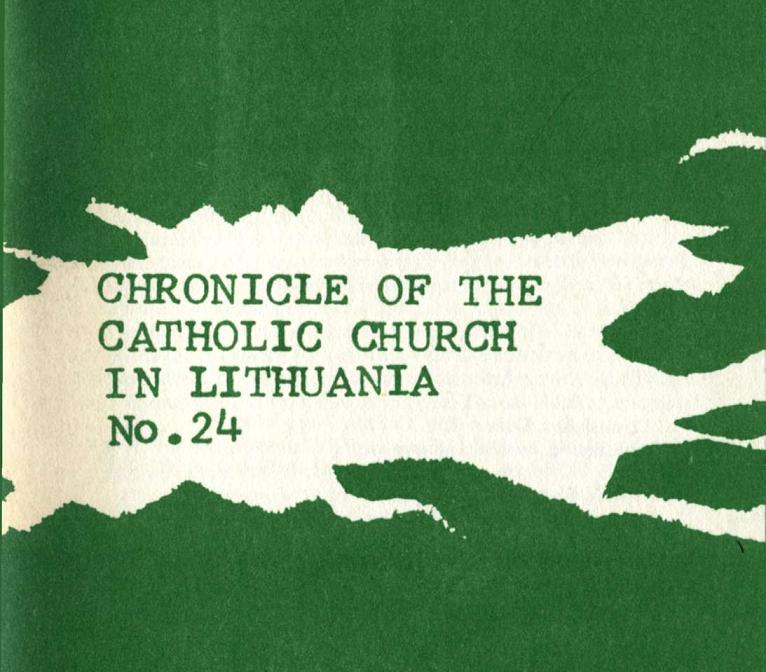 The Roman Catholic Church in the Soviet Union

Here is an interview which Viktoras Butkus, Doctor of Theology and Hector of the Kaunas Roman Catholic Seminary, was kind enough to grant us:

Hostile propaganda abroad is spreading all kinds of fabrications about the situation of the Church in Soviet Lithuania. Would you kindly tell us what the situation really is?

The inhabitants of Lithuania, as throughout the Soviet Union, enjoy freedom of conscience, which is granted them by the Constitu­tion (art. 96). Every citizen can freely attend church or pray at home, decorate his home with crosses and other religious pictures; purchase prayerbooks, Bibles and other religious works. Soviet laws guarantee believers respect of all their rights.

Has the number of parishes and dioceses, Catholic churches and priests declined in Lithuania under the Soviet government?

The number of parishes and dioceses remains the same. And as for Catholic priests, today there are slightly fewer of them, especially since a certain number of ministers of cult left Lithuania during the war.

The Moscow French-language weekly Les Nouvelies de Moscou (7131176, No. 31) and the English-language Moscow News (6112176) published the interview with Kaunas Seminary Rector Dr. V. Rutkus on "The Roman Catholic Church in the Soviet Union."

This is not the first such interview with Dr. Butkus in the atheist press. In America, Laisvė (Freedom) (12/31/65) printed a rather modest version with appropriate omissions. The Moscow-based newspapers are bolder, containing many pearls of "truth." We feel that (as is usual here) this is ca collaboration of two authors: the statements of Dr. V. Butkus were, probably, somewhat "amend­ed" by the newspaper editor. In the interest of truth the article should be added to and clarified.

1. We read: "Every citizen can freely attend church . . ." He can, but afterwards will he not be "re-educated" in appropriate agencies? If he holds a responsible position, will this not affect his employment, will he not be labeled "anti-Soviet?" Why do most people ask for religious ministrations secretly, at night? Why do they ask that their marriages or baptisms not be recorded in church record books? Why were some priests ordered (in the Vaėena"Rayon", Vice-Chairman J. Visockas ordered all priests) to bring church record books to the Executive Committee. Even prosecutors have demanded this (in Varena).

2. We read: " . . .can decorate his home with crosses and other religious pictures." He can decorate his home thus, but this can have unpleasant consequences. Why do most keep their prayerbooks, reli­gious books and crosses hidden from outside view? During searches of lay persons' apartments, why do security agents hurl insults after finding religious articles? Why is religious literature confiscated during searches? Why are questions asked regarding where religious pictures were acquired?

The pastor of Kalviai, the Rev. Zigmas Neciunskas, well known throughout Lithuania for his goodness and noble life, died on June 21, 1976. With great sorrow, the decedent's friends and parishioners gathered to attend the beloved priest's funeral. And who had not been touched by the good heart of Father Zigmas? The post-war partisans had; the faithful of several parishes had; long-term labor camp friends had and his brother priests had. However, there were people who detested Rev. Neciunskas. The atheists of Kaišiadorys planned to disrupt the funeral. On the eve of the funeral, the Kalviai district chairman issued an order that the priests not be allowed to park their cars near the church and organize demonstrations. The funeral services on June 23rd were conducted in Kalviai by Kaišiado­rys Diocesan Administrator Msgr. J. Andrikonis. Everything had been arranged so the funeral would take place as unobtrusively as pos­sible. Rev. Valatka gave a bland sermon without even once mention­ing the late Father Zigmas personally. The priests and the faithful were offended and insulted: how far things had gone in catering to the atheists and the government! The Kaišiadorys curia did not inform Bishop Vincentas Sladkevičius of Rev. Neciunskas' death, though the bishop respected the decedent and the decedent sincerely loved the bishop.

The relatives of Rev. Z. Neciunskas decided to bury him in his native town: in the Santaika Cemetery. When the casket was car­ried into the churchyard, it became clear that there were no trucks to take the casket and the people to Dzūkija (southern part of Lithuania). It seems that the Kaišiadorys Rayon executive com­mittee vice-chairman, with the assistance of the Kaišiadorys motor vehicle department, diverted the vehicles to Kaišiadorys, explaining that state farm vehicles should not be used for a priest's funeral, although he knew quite well that the Rayon does not have special vehicles for funerals and everyone uses government transportation. The situation was saved by Rev. Alfonsas Svarinskas, Father Zigmas' labor camp friend. The casket of Rev. Neciunskas was placed in the trunk of Father Svarinskas' "Zhiguli" car, it was tied with ropes because part of it dangled in the air, wreaths were placed on the casket and, accompanied by a caravan of passenger cars, it left for Santaika. The people asked that the cars drive slowly, and, for over a kilometer, the tired and weeping people followed their pastor to his place of eternal rest. Unfortunately, because of the arbitrary actions of the Kaišiadorys atheists, most could not go to Santaika.

Complaint by the Rev. Z. Naciunskas

Regarding the Actions oj the LSSR Council of Ministers' State Television and Radio Committee, which Brutally Violated Basic Standards of Truth and Justice as They Relate to Human Dignity and Religious Rituals.

Officials of the State Television and Radio Committee of the LSSR Council of Ministers, by means of covert and tricky deceit, without my knowledge or consent, arranged to have me filmed at the Kaišiadorys Rayon Executive Committee, and while offering Mass in the Church at Kalviai. This film, entitled And for Ever and Ever, was aired on television to the believers and the public of Lithuania with occasionally slanderous comments about me.

I was officially summoned to come to the Kaišiadorys Rayon Executive Committee. There, I was sent from office to office, and asked meaningless questions about the attendance of tourists at the Church of Kalviai and the like. It appears that a television crew filmed me there with equipment set up in advance.

Later, as I was offering Holy Mass on Sunday at the Church in Kalviai, with numerous parishioners ardently praying, men noisily barged into the church with television equipment and without my per­mission began to film, taking over the church as though it were their private studio.

On June 20, 1975, immediately following her trial, Nijolė's brother took warm clothing to his sister, but Warden Petrauskas, of the Vilnius KGB isolation prison refused to accept them. That same evening, Nijolė Sadūnaitė was taken away to Mordovia.

(Miss) Sadūnaitė was kept seven days in a Pskov prison cell. The cell where she spent an entire week is in the basement, damp, cold, filthy and airless. A filthy pallet was thrown down, she was not given a pillow, sheet or blanket. Nijolė caught a cold in this icy and damp cellar. When she asked the cell guard for cough medicine, the latter angrily replied, "Well, cough yourself back to health!" After this reply, Nijolė Sadūnaitė no longer asked for any medical help, although she needed it badly.

In Yaroslavl, Nijolė was kept one and a half days in a cell with a female criminal.

In Gorki, Nijolė was kept seven days in a semi-basement cell with female criminals.

(Miss) Sadūlnaitė was kept one night in the Ruzayevk prison.

In Potma, she was kept five days in a cell with female criminals. She slept every night on the floor. The cell was infested with bedbugs as unmerciful as the guards themselves. Nijolė spent two days in Potma in an isolation cell.

In 1976, the Soviet government allowed nineteen young men to enter the Kaunas Seminary. There were about thirty applicants. One of the applicants confirmed by the government never arrived, but the government did not allow another to take his place.

This year, the men who entered the seminary were especially zealously recruited to work as undercover security police agents. It is regrettable that this year certain applicants, who should not have been admitted, were admitted to the seminary, and quite a few truly serious applicants were not allowed to enter. Some were told not to attempt entering the seminary even in the future, because they would not be accepted.

And so, this year the Soviet government made a conces­sion by agreeing to increase the number of entries to the seminary, but as a result did everything in its power to lower the quality of the applicants.

In June 1976 the customs duties on packages from the U.S. were increased 800%. Nowadays, Lithuanians are able to manage without material support from relatives living abroad; therefore, the funds pre­viously allotted to material support can now be used for the most vital type of aid—the fight for national and religious freedom.

The second and third issues of Aušra (The Dawn) have also been published in Lithuania.

Arminai Middle School Principal (Mrs) J. Berentienė went to the 10th grade class on April 20, 1976 and asked: "Who among you at-dended church on Easter?" There was complete silence. Then the principal said: "Stand up on your own, because I already know very well who was in church!" The tenth-grade students stood up. It seems that many Communist Youth League members and the school com­munist league secretary had gone to church. There began lectures against religion, the church was ridiculed, and afterwards a Com­munist Youth League meeting was held during which members were harassed for going to church. Communist Youth members were even summoned to the Vilkaviškis Rayon. There, RayonCommunist Youth League Secretary A. Lengvinas took membership cards away and ruled on whether or not to allow believer students to remain in the Communist Youth League. 11th grade student B. Ramanauskaitė was promised the return of her membership card only if she promised not to attend church.

On January 13, 1976, Šilalė Middle School Teacher (Mrs) Vasiliauskienė was conducting an atheistic discussion with two grades of children, attended by about sixty students. Communist Youth members read reports which insulted priests, slandered the church and degraded believers. Then the students were told to state their views, but remained silent. Then (Mrs.) Vasiliauskienė asked one student:

"Then you still believe in God and do not renounce the Church? Don't you remember how many books I've given you to read?"

"It is your atheistic books which opened my eyes. I saw that everything is distorted in them."