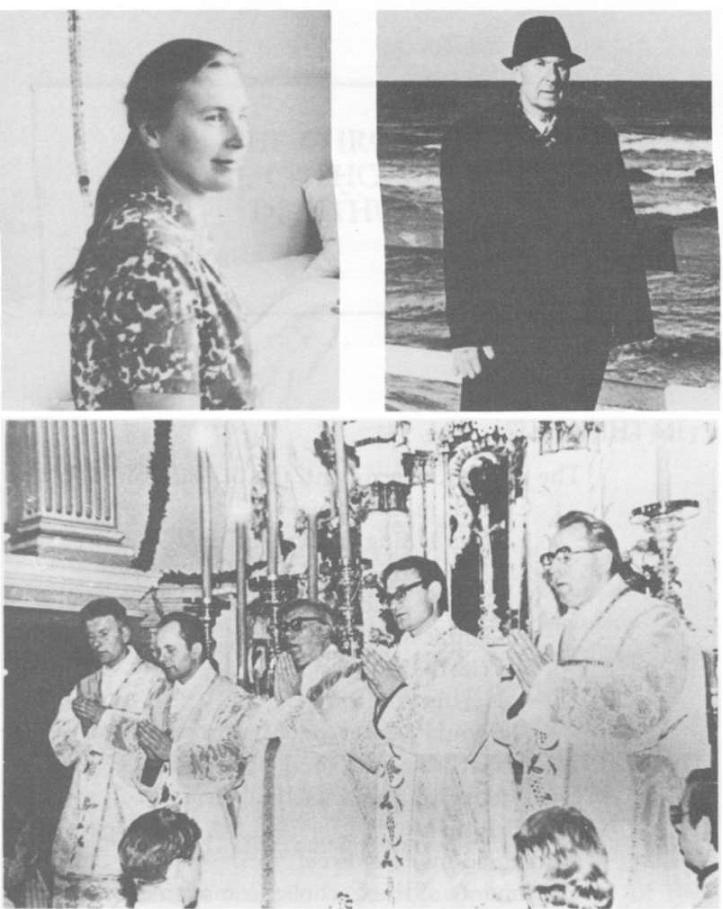 The Soviet Government, the Chronicle, and the Church in Lithuania:
1. Discrediting Active Priests
2. Discrediting the Chronicle
3. The Question of Clergy Unity
4. Contacts with the West
5. Priests Councils
6. Is This Politics?
7. Should Repressive Measures Be Feared?

Anilionis "Educates" the Deans Again
Searches, Interrogations, and Arrests
Our Prisoners
Nijolė Sadūnaitė Is Free!
Documents of the Catholic Committee for the Defense of Believers' Rights
News from the Dioceses
In the Soviet School
The Church in Other Soviet Republics
1.  Byelorussia
2.  The Ukraine
New Underground Publications

This issue is dedicated to
NIJOLĖ SADŪNAITĖ,
whom believing Lithuania joyfully welcomes
on her return from the Gulag to the Homeland,
grateful for her love, suffering, and sacrifice

THE SOVIET GOVERNMENT, THE CHRONICLE, AND THE CHURCH IN LITHUANIA

Substantial changes have occurred in the life of the Lithuanian Catholic Church during the past decade. If under the repressions of Stalin and Khrushchev the prevalent mood among most priests was passiveness and helplessness (It used to be said: "You can't knock down a wall with your head"), this has disappeared during the last several years. The positive reorientation of priests was greatly influenced by the Russian dissidents who displayed much willingness to sacrifice and much determination in their battle against lies and coercion and for basic human rights. Also, influential were the Polish clergy, with Cardinal Wyszynski in the forefront, who have fought so energetically for full religious freedom in their country. The priests and the believers of Lithuania have long ago come to understand the truth expressed so beautifully by Pope John Paul II when he said that the faithful will have as much religious freedom as they themselves manage to win. In fact, the decade-long struggle has not been without results. The theological seminary quota was quadrupled (from five to twenty candidates per year); after forty years of Soviet rule Catholics this year are finally seeing the first catechism published; despite the government's warnings, nearly  all  parishes   publicly  instruct  children,  have schoolchildren participate in processions, serve at mass, etc. It is obvious to everyone in Lithuania that the Soviet government has, at least for the time being, retreated in certain areas, not as a result of any "diplomatic steps" taken by priests who are government collaborators but because the faithful and the priests are persistently demanding their rights and many have even sacrificed their own freedom; for example, Father Antanas Šeškevičius (for instructing   children),   Petras   Plumpa   (for   religious literature), [Miss] Nijolė Sadūnaitė (for duplicating the Chronicle of the Catholic Church in Lithuania), and others.


It is possible to "negotiate" something from the Soviet government only when it begins to fear the believing community. But when the faithful are passive and unaware, then there is fertile ground for the tyranny of state atheism to flourish; for example, hardly any young people attend the churches of Latvia and for the past three years the Riga Theological Seminary has been allowed to admit only non-Latvian candidates. Lithuania's religious rebirth has worried the higher Soviet authorities for quite some time. This year especially efforts have been made to discredit priests. Religious Affairs Commissioner Petras Anilionis has labored feverishly through the press, television, and in his talks with the clergy and the deans to indicate that active priests are "extremists," "disrupters of unity," "politicians," "slanderers of the Soviet system," and deserving of punishment.

On May 21,1980, the Religious Affairs Council sent the following telegram to the Kaunas Chancery:

On May 29 the assembled deans and assistant deans were addressed by Religious Affairs Commissioner Petras Anilionis. The main point of his speech was that religious extremism" is preventing priests from obeying Soviet laws and the Regulations for Religious Associations.

At first the commissioner attempted to explain the reason for the occurrence of religious extremism. In his opinion there are two major reasons:

1. The "extremist" priests are seeking notoriety (they want their names mentioned on Vatican Radio and their photographs published in foreign newspapers).

On May 29, 1980, Father Albinas Deltuva, pastor of Sasnava. was summoned for interrogation by the Vilnius KGB. The Chekist Rainys questioned him about [Miss] Ona Vitkauskaitė. Did she really work for the Sasnava church? Did she, on occasion, give him the Chronicle of the Catholic Church in Lithuania to read? The interrogator asked whether Father Deltuva had actually signed certain documents addressed to the Soviet government. The priest refused to sign the minutes of the interrogation on the basis that he was not certain whether the interrogators were investigating a crime. In his opinion, it was possible that several decades into the future monuments would be erected to those who are now considered criminals. Interrogator Rainys assured him that neither of them would see that day. Dismissing Father Deltuva, Interrogator Rainys stated that the efforts of Fathers Svarinskas, Tamkevičius, and Zdebskis are in vain, for they will change nothing.

On June 2, 1980, [Miss] Bernadeta Mališkaitė was summoned to the Kaunas State Security Committee Department. Her "education" was conducted by a security agent who did not dare to identify himself. For two and one-half hours he explained how a believer should behave. The interrogator was beside himself, trying to convince her that the Church in Lithuania has full freedom of belief. He claimed that the government is very humane and does not force anyone from the Church. Throughout the talk the Chekist continually slandered priests, calling them"hawks" and "blood-sucking parasites." Intermittently there were questions: Did she know the arrested [Miss] Navickaitė and Janulis?   Did  she  ever  see  them  visit  [Miss]   Ona Vitkauskaitė's apartment?

Povilas Buzas was born on January 3,1919, in the village of Bačkininkai, Prienai Rayon, into a large Catholic family. Povilas was the ninth of ten children. His father died in 1920 and his mother in 1928. Povilas was, therefore, forced to work a great deal from childhood and had no opportunity for schooling. He barely completed four grades.

When the Soviets occupied Lithuania, Buzas joined the freedom fighters in battle against the occupiers. He was arrested in 1946 near Veiveriai and sentenced to a ten-year prison term. He served his term in Inta, Komi, ASSR.

He returned to Lithuania in 1956, married, and had two sons. He lived in Birštonas most recently.

Povilas Buzas is an outstanding Lithuanian and a zealous Catholic. His work and suffering in the labor camp will be a major input in the revival of the nation and the Church.

On May 6, 1980, [Miss] Nijolė Sadūnaitė received the following telegram from Zurich, Switzerland:

"The International Christian Solidarity sincerely sends you its wishes from its annual conference, which is bein held in Zurich. Delegates and observers from fourteen countries have expressed their solidarity with you in your courageous fight for the freedom of belief and conscience. We will continue to keep you in our prayers and will continue to inform Christians about you. Please remember that we also need your prayers and support in inviting Christians throughout the word to solidarity.

DOCUMENTS OF THE CHRISTIAN COMMITTEE FOR THE DEFENSE OF BELIEVERS' RIGHTS

Document no. 31: addressed to L. Brezhnev, General Secretary of the Communist Party of the Soviet Union. Issued on March 12,1980. The document defends Catholic Committee Secretary Viktor Kapitanchiuk, Aleksandr Ogorodnikov, the founder of the Russian Orthodox Religious Seminar, and others arrested on religious grounds.


"To: The Central Committee of the LSSR
Communist Party and the Government of Lithuania


"This year agents of the State Security Committee arrested four fighters for the rights of Lithuania's believers, Povilas Buzas, Anastazas Janulis, [Miss] Genovaite Navickaitė, and [Miss] Ona Vitkauskaitė, charging them with slandering the Soviet system. The prisoners are being prosecuted. It is generally claimed that they will be punished for printing and distributing the Chronicle of the Catholic Church in Lithuania.

Vilnius
In 1980 the Western pres and radio reported a statement made on November 25, 1979, by the arrested Vytautas Skuodis, a lecturer at Vilnius State University, in which he considered himself "the sixth member of Lithuania's Catholic Committee for the Defense of Believers' Rights."

In his December 16,1979, statement to the committee, Skuodis wrote, "Because I proclaimed membership in the committee without consulting with other committee members ... I ask that you consider my earlier statement invalid."

Prienai
On April 18, 1980, the Prienai Secondary School students Aldonas Gudaitis and Algis Gudaitis were summoned to see the vice principal. There Prienai security agents were waiting for them and took them to the Prienai KGB headquarters. Both students were questioned as to their whereabouts on February 15-17. They were accused of raising the tricolor flag of independent Lithuania on February 16. The Gudaitis brothers denied this accusation. The interrogators acted brutally and often shouted: "What sort of freedom do you need? It isn't enough that you eat? You little snot, we have handled worse than you, and we'll handle you!"

They released the innocent youngsters after harassing them for two and one-half hours, ordering their father to appear the following day.

On May 14, 1980, [Miss] Vida Mačiulytė was summoned by the Prienai KGB. The security police asked the schoolgirl whether she had sent greetings to the prisoners Plumpa, [Miss] Sadūnaitė, and others. Does she go to church? Does she know the Gudaitis brothers? etc.

THE CHURCH IN OTHER SOVIET REPUBLICS: BYELORUSSIA

Gervėčiai
At the beginning of May 1980 Father Josif Ivanovich Zenevskij, pastor of the Gervėčiai church, was fined 50 rubles by local township officials because he greeted children when he met them in the town, inquired how their studies were progressing, and sometimes invited some of them to come to church services. By doing so, the priest was alleged to have violated Soviet laws: he engaged in religious propaganda outside the confines of the church.

The complaint to the Gervėčiai Township Executive Committee was written by Taisa Nikoloyevna Murina, who is in charge of the after-school activities at the Gervėčiai Secondary School, and was signed by the school's entire administration.

It would seem that in Byelorussia a Catholic priest is equivalent to a leper who is forbidden by law to meet and associate with people.

THE CHURCH IN OTHER SOVIET REPUBLICS: THE UKRAINE

On the same day in the summer of 1975 that Brezhnev declared that the freedom of belief existed in the USSR, the prosecutor and the judges of Lvov read the court's ruling that sentenced the Greek Catholic priest Michail Vinickis to five years' imprisonment and three years of exile for the so-called crippling of the girl Novosad and for instructing children in their catechism. The trial lasted an entire week. Father Vinickis was charged with psychologically affecting the girl through his prayers.

The court proposed that the priest repent for damaging the health of children by instructing them. Father Vinickis was also charged with permitting children to attend a mass which was offered in a private home.

During the summer of 1977 in Mshan Village, Gorodok Rayon, Lvov Region, a group of policemen with dogs surrounded a Ukrainian church. They destroyed everything inside after confiscating the more valuable items. The church was converted into a warehouse. The believers appealled to Kiev and Moscow, demanding that their church be returned. Moscow officials acknowledged that the faithful were correct in their complaint but did not help them get their church back.

The editors have received only one publication: Vytis (Knight (emblem of the Lithuanian state]) no. 4 (March-April 1980). Its contents:
—    Dybenko, Governor General of Lithuania
—    Open Letter from J. Sasnauskas
—    Open Letter to Second Secretary N. K. Dybenko
—    Statement from A. Statkevičius to N. K. Dybenko
—    [Miss] D. Keršiūtė's Statement to the People's Court
—    A Document to the U. N. Secretary General
—    Statement to USSR Secretary General L. Brezhnev
—    The Lithuanian Cultural Avant-Gardism of Aničas
—    New Members of the Lithuanian Helsinki Watch Group
—    Chronicle of Events
—    To Those Who Fought
—    Rasūnas.