CHRONICLE OF THE CATHOLIC CHURCH IN LITHUANIA No. 22

Construction of the Church at Tauragnai

News from the Fatherland 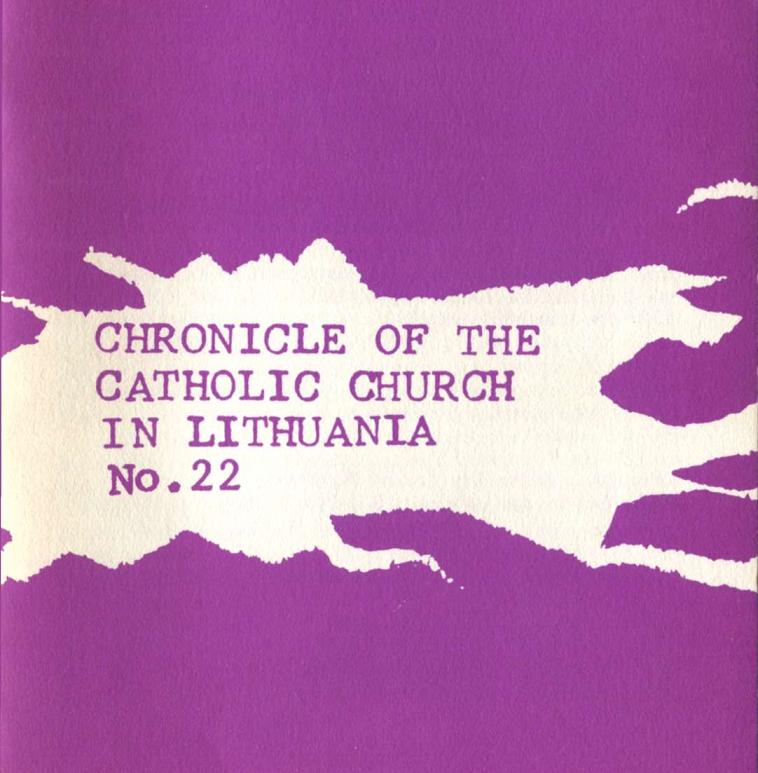 Because the Soviet press is the concern of the Central Com­mittee of the Communist Party (KP CK), we wish to direct the atten­tion of the KP CK to the articles of Assistant Professor J. Aničius, a doctoral candidate in history, published by the Lithuanian Soviet press this year. A variety of newspapers has printed his articles on laws concerning religious practice and freedom of conscience. These articles contain much obvious sophistry and many untruths.

Bourgeois countries do not formally endorse the freedom of anti-religious beliefs, because that is a self-evident requirement, such as eating, washing, and the like. Does any country in existence outlaw the atheist press or place restrictions on atheistic, so-called "progres­sive" organizations?

2. In this same article Aničius states that bourgeois countries "have a one-sided interpretation of freedom of conscience, as the freedom to profess a religion . . . Bourgeois Lithuania (pre-World War II) defended the rights of its believing citizens . . .how-ever, it did not guarantee all citizens, including non-believers, freedom of conscience."

There is much more "one-sidedness" in Lithuania today than there was betore the war. At that time both the religious believers and the atheists could express and propagate their beliefs, while today only atheists have that right.

In pre-war Lithuania, atheists could occupy high positions. For example, the rector of the agricultural academy from 1926-34 and minister of education 1934-39 was J. Tomkūnas; the representative of the bourgeois government of Lithuania to London in 1919. rector of the University of Kaunas, 1929-33, and Minister of Education, June 15, 1926 to December 17, 1926, was J. Čepinskis. There was a host of professors: Vl. Dubas, Bl. Lašas, P. Avižonis, T. Ivanauskas, and others.

CONSTRUCTION OF THE CHURCH AT TAURAGNAI

Tauragnai lies in an area of forests, lakes, hills and castle ruins in eastern Lithuania along the Tauragnai and Labe Lakes, in the Rayon of Utena.

The last church of Tauragnai was cruciform, with a single tower. Externally, it was simple in appearance, but inside it was ornate, and had five altars. The procession especially was rich and interesting. The history of this church ended July 1, 1944, when German planes set the church and other town buildings afire.

After the fire, the rectory was left, and next to it the parish hall, in which a church was set up. Its over-all length was 21 meters, its width 13 m. and its height 4 m. The building was really small. It could not accomodate the faithful for services. During the principal Mass in the summer the churchyard used to be full.

On feast-days, the local atheists, with the permission of the Rayon of Utena used to disturb services with various songs and music over loudspeakers from the nearby house of culture. The activities of the atheists, encouraged by the government and the press, became obnoxious. They were most unhappy with the presence of a house of prayer in the center of town, visited by large numbers of the faithful, including men and youth. On the evening of April 30, 1967, the parish hall, where the temporary church was housed, was set afire. The cause of the fire was unknown. Government officials said that the reason was that the wiring in the church was defective. However, there were people present at the time of the fire, who called attention to the fuses in the meter. They were working. Moreover, the fire quickly engulfed the entire structure, as though it had been somehow fueled.

Šiauliai. On March 17, 1976, at 8:30 P.M. a fire was discovered in the front tower of the Church of St. George, in Šiauliai. The fire department and militia of the City of Šiauliai were summoned. Some of the firemen were inebriated; they worked without enthusiasm or organization; when the faithful asked them to get on with the work of putting out the fire, they would reply with sarcastic and unprintable remarks.

With the tower blazing, they misdirected the stream from the fire-hose. When the people asked them to aim at the fire, the firemen sarcastically explained, "We can't pour water on the belfry, — it might melt the bells."

Their sarcastic comments could be heard to the effect that the bells would soon be falling. Once the small belfry had collapsed, the larger one came down soon after. Even though many fire engines had answered the call, only one engine was operating, and its hoses were perforated. The water flowed more on the ground than on the fire. In the street, the following engines stood by idle: LIZ 34-13; LII 4-50; 99-19-29; 27-82.

Those standing further off could see clearly how the flames were approaching the larger belfry. When the people asked the firefighters to cut off the advance of the blaze, the latter threatened to have the complainers arrested.

When the flames had enveloped most of the church, at 9 P.M. a military firefighters' unit was summoned. The firefighters from Šiau­liai, although doing nothing, did not wish to turn over the task of fighting the fire to the soldiers. They ordered the military detachment to withdraw 200 meters from the church.

Only when the faithful asked repeatedly, it it were possible for the military detachment to replace the city firemen and to get on seriously with the task of extinguishing the fire. Thanks to the military, the fire was extinguished, the altars were saved and the large belfry survived.

The Šiauliai newspaper announced that the church caught fire because of bad furnaces, even though that day the stoves of the church had not been lit. The people do not doubt that the church was set afire by people of bad will.

Veisiejai.On February 16, 1976, the Veisiejai Middle School principal, Stabingis, School Inspector Ditkus, and Klimčiauskas, a teacher, "arrested" those pupils who had attended Mass that day. The "arrested" pupils were forced to write explanations, and as usual in such situations, were threatened, using various methods of black­mail.

To the Attorney General of the LTSR

On February 17, 1976, Interrogator Zinkevičius arrived at Veisiejai Middle School, beat my son Gintautas, a 7th Grade pupil, and forced him to admit falsehoods.

After leaving the interrogator's office my son was unrecognizable even to (Mrs.) Vailionienė,, who knows him very well.

My son fled, intending to commit suicide, but was stopped by R. Mizaras and another pupil.

That evening the boy felt poorly. A doctor was summoned and she gave him an injection; but Gintautas was not able to return to his classes for three days. The doctor wrote an explanation which was submitted to his homeroom teacher, Mrs. Ragažienė.

NEWS FROM THE FATHERLAND

In December of 1975, two collective farms in the Kapsukas Rayon, "Dovinė" and "Piliakalnis", were consolidated. Early in

"Dovinė" collective farm was much weaker economically, its workers received lower wages and, besides, the collective farm workers had many personal grudges against the former chairman, Servytis.

On December 10, First Party Secretary Sinickas and Instructor Jankauskas came to the meeting at which the election was to be held. They brought along Servytis, the former chairman of Dovinė collective farm.

DECISION in the name of the Lithuanian Soviet Socialist Republic.

On May 7, 1963 , the People's Court of Kėdainiai, consisting of the chairman, People's Judge Olšauskas, and spokespersons for Laščinskas, Public Accuser Žukus, K. Ptašinskas and Attorney Š tarka participating, (Mrs.) Stanevičienė as secretary, having fully considered in a public trial which took place in the audi­torium of Middle School No. 2 the criminal case in which Algiman­tas Anastazas Šaltis, son of Vytautas, born May 2, 1944, in Kė­dainiai, L.S.S.R., Lithuanian, non-member of the Party, with a ninth-grade education single, recruit, with no previous convictions, unemployed (he was taking a vocational course at night school, in the tenth grade), born of white-collar workers, residing in the City of Kėdainiai, Vilniaus g. No. 12, was accused according to Paragraph 144. 1. d, of the Criminal Code of the L.S.S.R.

Having considered the material from the preparatory and the trial interrogations, having questioned the accused and witnesses, having listened to the presentations of all parties and the final word of the accused, the people's court has decided: that the accused Šal­tis, being a student in the tenth grade of the working youth middle School of Kėdainiai, having done no work useful to society (even though he is a physically well and mature young man), regardless of the fact that back in 1960 he had been warned by security organs about recruiting young students in to the so-called "Living Rosary", i.e., the proclaiming of belief in god and teaching of religious ceremonies, nevertheless failed to make the necessary conclusions from this and continued his criminal activities.

Thus, the accused Šaltis in 1961 taught a group of young students religious ceremonies and prepared them for communion. Not content with that, in the summer of 1961, during school vacation time, the accused Šaltis, under the pretext of proclaiming belief in god, organized nine groups of high school students in the Rayon of Kėdainiai. Included in this group were some Pioneers and Little Octobrists, whom he taught catechism, and prayers, distributed religious literature among the children, carried on correspondence with the goup which had been organized, urged some of the school­children not to enroll in the Pioneers' organization, and not to believe in Communism.