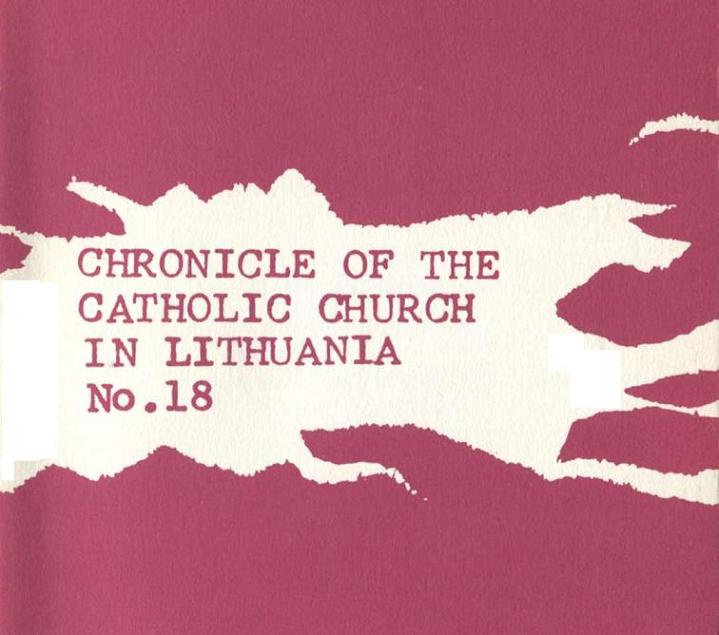 August 1st saw the end of the Conference of European nations in Helsinki called at the initiative of the Soviet Union. This game played by the world's powerful evoked bitterness and disappointment in the hearts of millions. In dealing with oil, wheat, business and personal contacts, the suffering of peoples and nations has been overlooked.

What can we, the Catholics of Lithuania, expect from the famous Helsinki conference, if we are not even given the full text of the Final Act in Lithuanian, if we have not yet been informed of the Universal Declaration of Human Rights and other international documents?

We thank the Almighty that, in these deceitful times, He has called such men as Nobel Prize winner A. Solzhenitsyn, Academician Sakharov and others to relay our laments, sufferings and yearnings to the world and arouse this earth's powerful from slumber and doubt.

The Chronicle of the Catholic Church in Lithuania, as long as the Lord will allow it to survive, will continue to present facts about how the Soviet Union is observing the Universal Declaration of Human Rights, both in the spirit and letter of Helsinki decisions.

"The Participating nations will respect fundamental human rights and freedoms, including the freedom of thought, conscience, religion and belief for all, regardless of differences of race, sex, language or religion.

May 1975 marked the 30th anniversary of the end of World War II, which required much suffering and sacrifice. That anniversary, considered a victorious holiday by the Soviet Union, was solemnly commemorated in Lithuania as well. But for Lithuania's Catholics, this anniversary coincided with another, though painful and sad, anniversary: Thirty years ago the atheistic government in Lithuania began an open, vicious and determined war against religious groups, especially against the Catholic Church in Lithuania. This war, considered dreadful by all decent people, is still going on. In order to escape unpleasant persecution, many Lithuanians are forced to hide their faith, as did Christians in the early centuries.

In the years 1945-46 nearly all churches in Lithuania still considered it normal to have children's choirs, services for school children (also attended by teachers), student retreats, and religious instructions of children in church, class by class. However, even then, this "toleration" of religious groups and the Church was considered by many as the calm before the great storm. This storm came all too soon.

Presently, all bishops in Lithuania were arrested. One of them, Bishop Borisevičius, was quickly sentenced to be shot to death. Mass arrests of priests began, with their interrogation, torture and trial, with sentences of up to 25 years. Simultaneously, churches were closed, and holy places beloved by all the faithful were destroyed and desecrated. In a very short time, by 1950, (That year the tenth an­niversary of Lithuania's annexation into the Soviet Union was celebrated.) in Vilnius and Kaunas alone, about 50 Catholic churches and semi-public chapels were closed, the use of cemetery chapels was forbidden, (Later some of them were demolished when the cemeteries were desecrated.), the Three Crosses in Vilnius were blown up, crosses and wayside shrines were torn down in streets and squares. On the eve of the 25th anniversary of Lithuania's annexation into the Soviet Union, 35 shrines at Kalvarija in Vilnius were blown up simul­taneously and the rubble immediately removed, so that there would be no trace of the existence of these shrines. The following is a list of churches and chapels closed in the cities of Vilnius and Kaunas alone, along with brief notes (albeit incomplete) on how they were used after being closed.

In recent years, even more zealous efforts are being made to decrease the influence of Lithuania's past culture, to push the legacy of her most outstanding and famous founders into oblivion, by holding up and glorifying only Communist notables of the Soviet era. An attempt is made to condense the nation's history into the framework of several decades, from 1917 on. This summer, during the Baltic Historians' Conference in Vilnius, historians were explicitly directed to turn all their attention to the Soviet period. No doubt, this is a long-planned and carefully executed policy of ignoring the nation's cultural past.

Last year, the 30th anniversary of the "liberation" was noisily celebrated in Lithuania. Many "liberators" were invited and feted, many of whom did not even participate in military operations in Lithuanian territory. New monuments were erected to persons who did not benefit Lithuania in any way; commemorative stones were erected in every rat/em to commemorate the "liberation," and vast sums of money were lavished to decorate the graves of Soviet soldiers.

This summer, the 35th anniversary of the restoration of Soviet rule in Lithuania was celebrated even more noisily. Russian guests were showered with expensive gifts, regaled in Lithuanian resorts, new "commemorative" stones were erected, new monuments to persons unknown in Lithuania.

Now what happens to the true founders of Lithuania's culture?

In mid-July, well-documented facts about the sentencing of Petras Plumpa-Pluiras to the Permė labor camp  reached the

Before being transported to Russia, Plumpa was held all week in solitary confinement. When leaving Vilnius, he was placed in a wagon with criminals, although political prisoners should be kept separately. For all of two months Plumpa was thrown in with murderers and thieves, who displayed their bestial talents in every way possible. Some of them took away the warm imported shoes given him by his wife in Vilnius, others divested him of his quilted jacket, others took his hat, gloves, etc. There were some who forced Plumpa into a corner and tried to learn the details of his trial, and failing to do so, stipped him to his underwear and threatened to disembowel him. Plumpa did not take any food with him to the camp—every­thing was taken away in the wagons, and, to top it all off, he was kicked around. All this was done with the knowledge of the authorities, for Plumpa kept telling them that he was tried under political articles and should be transported separately.

Kaunas. On August 14, 1975, near Babtai, Security Committee officials stopped the "Zhiguli" automobile driven by (Miss) Marytė Vitkūnaitė with four passengers, and stated that they had to search the car.

One official, dressed in militia uniform, drove the car to the Kaunas Security Headquarters yard. The passengers were taken away for questioning and the car was thoroughly searched, under the direction of Captain Marcinkevičius, an interrogator of the Vilnius Security Committee. The following individuals were present at the search:

The car was dismantled by the following specialists:

Carion, Ivan, residing in Kaunas, Lenino g. 57-30 and Adomavičius, Kęstutis, residing in Kaunas, Gedimino g. 39-1. For two hours they searched for "anti-Soviet literature" in the car's tires, radiator, gas tank, and in every recess of the car, but they found only a copy of One Day in the Life of Ivan Denisovich by Solzhenitsyn, published in Vilnius in 1963.

To: Attorney General of the Lithuanian SSR, Copies to: Bishop of the Kaunas Archdiocese and Vilkaviškis Diocese,

Soviet Commission for Religious Affairs A Statement from:

Residing in the Lazdijai Rayon, Village of Buckūnai.

One year ago I erected a wooden cross next to my front steps. This is an ancient tradition in Lithuania: out of respect for the cross, Catholics erect it in fields, near homes, hang it on the walls of their homes, wear it around their necks and so on. I was convinced that since I do not need the Government's permission to hang a cross around my neck or on my wall at home, I do not need it either to erect a cross next to my own front steps. However, the officials of the Lazdijai Rayon Executive Committee decided otherwise and ordered this cross removed. Of course, as a Catholic, I can only respect the Cross and not desecrate it; therefore, I did not remove the cross. I consider criminal the very order to a Catholic to remove a cross. How would it look if a Communist were ordered to tear down Lenin's portrait or demolish his statue?

To: The Comissioner for Religious Affairs

Copy to:   The Apostolic Administrator of the Kaunas

On July 7th of this year, after morning services, the following local officials came to the Kučiūnai church: District Chairman Kočiū-nas, Party Secretary Sakavičius and (Mrs.) Dimšienė, Secretary of the Communist Youth Organization. They found me sitting in the con­fessional asking the children their prayers one by one. Other children were sitting in the church waiting their turn.

The local officials drew up a complaint and the Lazdijai Rayon Administrative Committee fined me fifty rubles for teaching children catechism (Case No. 154, July 17, 1975), although I stated that I did not teach catechism because the parents themselves had been doing a good job of teaching it at home for the past several years.

I am asking you, Commissioner, to take the appropriate steps to overrule the decision of the rayonadministrative committee, and to see to it that no obstacles are placed in the way of the performance of my priestly duties.