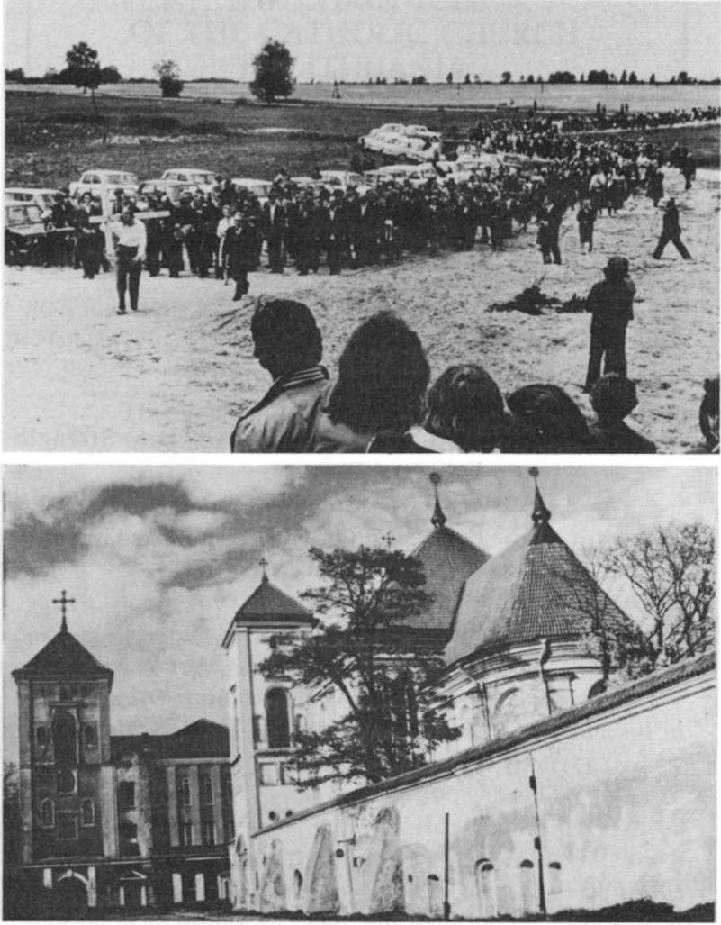 Read and pass on!
Duplicate if you can!
Published since 1972

This issue is dedicated to the memory
of the heroic sacrifice of the late.
FATHER VIRGILIJUS JAUGELIS

The postwar years were difficult in Lithuania. Innocent people were deported to Siberia, the corpses of slain patriots were dragged through city streets, and the prisons were crowded with innocent people. Those years were difficult for the Jaugelis family as well; the father sat in prison while the mother was constantly interrogated by security police. On September 9, 1948, Jaugelis's second son, Virgilijus, came into the world. Providence allowed this boy to suffer from the very beginning of his childhood. During the winter the hungry child pressed close to his mother in an unheated room. She gave her children all that she had: a true faith in and deep love for Jesus and Mary. The small boy, wearing a threadbare fur jacket, would hurry to church daily. There, approaching the altar on his knees, concentrating intently, he recited three parts of the rosary and then served at mass:

Having completed high school, Virgilijus did not hesitate to turn directly to the theological seminary. In 1966 the seminary administration would not include Virgilijus on their list of candidates because there were no openings, due to the very low quota imposed by the atheistic government. The Religious Affairs Commissioner simply crossed off anyone above the limit.

In 1967 the secret police summoned Virgilijus when they learned that he wanted to study at the seminary and tested his integrity. The zealous Stalinists did not like Virgilijus's strong-willed character and "Herod's allies blocked Virgilijus's path." The rector of the seminary informed him: "Your request is denied this year."

On January 30, 1980, KGB Chief Interrogator Markevičius and a group of security agents, Raudys, Čekenis, and Jurevičius, searched the home of Povilas Buzas at 18 Cvirka St., Birštonas. V. Laurinavičius and Liudas Bazilius, both residents of Birstonas, were called upon to act as witnesses. The search began at 9 a.m. and concluded at 6:20 p.m. During the search, they found Povilas Buzas working in the basement with a photocopying machine.
The following items were confiscated during the search:
— 17 photographs showing processions of people, five priests, etc.
—a photo enlarger and easel
— 49 kg of white paper
— about 100 photocopies of issue no. 11 of Rūpintojėlis (The Pensive Christ)
— typewritten copies of issues no. 41 of the Chronicle of the Catholic Church in Lithuania, no. 19 of Aušra (Dawn), no. 11 of Rupintojėlis
— a homemade photocopying machine, nine unnumbered selenium plates, photocopying chemicals, a transformer, 19 bottles of commercial acetone.

After the search Povilas Buzas was arrested and taken to Vilnius.

TERRORIZATION OF THE ORDINARIES

On January 28, 1980, at the Religious Affairs Council office in Vilnius, bishops and administrators began a routine briefing session. This briefing-debasement was to remind the Ordinaries that they are totally at the mercy of the atheistic government. It is doubtful whether Commissioner Anilionis spoke this strongly to collective farm chairmen when he was first secretary of Kupiškis Rayon.

The briefing was begun by A. Česnavičius, deputy chairman of the LSSR Council of Ministers. His main points are summarized below.

There is concern over certain phenomena in Lithuania such as secret priests (he gave their names) — greedy criminals previously tried for their crimes, ignoramuses. The question arises who ordained them?

Bishop R. Krikščciūnas interrupted by way of explanation: "I certainly did not ordain them; neither did Bishop Povilonis nor Bishop Sladkevičius."

The clergy has extremist sentiments claimed Česnavičius: the carrying of crosses to the Hill of Crosses, holding services under the open sky (Father A. Mocius), the procession to Šiluva (Father K. P. Krikščiukaitis). Both priests will be referred to the Prosecutor's Office.

THE FIGHT AGAINST THE CHURCH GAINS STRENGTH

"1. See to it that priests and other religious not usurp the rights of parents in preparing children for catechization and confirmation.

"2. Issue written and verbal reprimands to individuals who have violated Soviet laws regarding cults.

"3. Organize the monitoring of sermons, regularly summarize them, and use them in antireligious propaganda to unmask extremists.

"4. Compile a personal file on every clergyman disposed toward extremism, including data on all his activities, documents showing the methods used to re-educate him. When a clergyman moves to another religious association, this file is to be forwarded to the local executive committee.

THE CATHOLIC COMMITTEE FOR THE DEFENSE OF BELIEVERS' RIGHTS

"An Appeal to Lithuania's Ordinaries, Priests, Intellectuals,
and All Our Brothers Living in the Homeland and Abroad
August 15, 1979
no. 20


"Recently the Catholics of Poland celebrated the 1000th anniversary of Christianity, an event for which they prepared ten years. The anniversary of the death of St. Stanislaus, the bishop-martyr of Cracow, was solemnly celebrated this year. The Holy Father personally visisted Poland for that occasion.

"The Catholics of the Ukraine are preparing to commemorate the 1000th anniversary of the establishment of Christinaity in Kiev, Russia, in 1988.

ANXIETY IN THE COMMUNIST PARTY

On November 28, 1979, the Vilnius People's Institute for the Advanced Training of Agricultural Experts hosted responsible leaders from that institute and its Kaunas counterpart. Secretary L. Šepetys of the Lithuanian Communist Party Central Committee attended this session and gave a lecture entitled"Questions of Ideological Work."

"Our primary task," said Šepetys, "is to improve the political function of education because extremist elements from abroad have intensified their activities." The agitated secretary first raised the question of religion, which, in his opinion, is very troublesome because reactionary priests and other elements are continually strengthening their disruptive activities." Even Pope John Paul II, in implementing the Vatican's goals, has begun reactionary activities. The pope's trip to Poland shook the Catholics of our republic as well.

THE PERSECUTION OF FATHER ANTANAS GRAŽULIS

"It has been established that in the Prienai parish church, school-age children are being consistently used to assist at religious services. On September 6 of this year you were issued a written warning (which you refused to sign) regarding this matter. On November 18 of this year nineteen children served at mass, however, and that same day fifteen children served at the evening mass. On Priest Warned Not to Violate Regulations 171

November 25 again twelve children served at Mass. There lave been cases where school-age children were recruited :o sing in the church choir.

"Once again we warn you that measures must be taken o keep cult servants from violating the Regulations for Religious Associations.

"Furthermore, we draw your attention to the fact that on the evening of November 4 of this year, you slandered Prienai Secondary School no. 2 Principal A. Mickas without ;rounds from the pulpit of the Prienai church.

(signed) Chairman of the Executive Committee
A. Budbergis"

Vilnius
On February 21, 1980, a huge crowd of believers and about sixty priests, some from the Archdiocese of Vilnius and others from various places in Lithuania, gathered in St. Theresa's Church in Vilnius. During the services, prayers were said for the nation's temperance. Most participants made abstinence or temperance resolutions.

The initiative of the Vilnius priests, which is so beneficial to the temperance movement, is to be congratulated.

[Miss] Alfreda Zutkutė, a resident of Vilnius, is being terrorized for her religious beliefs, and efforts are being made to confine her to a psychiatric hospital. On January 15,1980, in a statement to General Secretary Brezhnev of the Soviet Union Communist Party Central Committee, Zutkutė told how KGB officials took her and her son to a psychiatric hospital for a medical examination, but the Doctors' Commission found the mother and son healthy and declined to admit them to the hospital. According to KGB officials, Zutkutė is harming her son with a religious upbringing and must be deprived of her rights as a mother.

In 1978 at the Lukšiai Secondary School eighth-grader [Miss] Birutė Alytaitė was enrolled in the Communist Youth League without her parent's knowledge. The Šakiai Rayon newspaper (May 13, 1978) even printed a small news item stating that the work of the school produced results since even the girl's mother had been convinced to change her mind. [Mrs.] Alytienė went to see her daughter's homeroom teacher, [Mrs.] Adomaitienė, and firmly stated: "We are believers and our faith forbids us to belong to godless organizations." The homeroom teacher assured her that the Communist Youth League would not harm the girl, but the mother would not yield, "You only want parents to take care of children, wash their dirty clothes and cover all educational expenses; but the child is not to be reared by his parents but by the school or state. That won't happen! Please arrange matters to show that my daughter never was a member of the Communist Youth League."

Alytienė suffered the consequences of her courage. She was employed as a cook at the Lukšiai Secondary School. The school administration made her work conditions such that Alytienė was forced to leave her job.

CATHOLICS IN OTHER SOVIET REPUBLICS

The Catholics of Moldavia have been served by Father Vladislav Zavalniuk since 1974. He is the only priest in the republic whom the spiritual authorities assigned upon graduating from the Riga seminary to work in Moldavia.

The government followed his every step during his five years of pastoral ministry. He was punished and warned more than once for daring, despite governmental prohibition, to minister to sick and dying Catholics, not only in Kishinev but in other Moldavian cities and villages as well, i.e., wherever he was summoned. Seeing that it could not buy the priest's conscience, the Soviet government took drastic steps. On December 6, 1979, it took away Father Zavalniuk's work permit.

Parish Council Chairman Augustin Faiglevich and Council member Zigmant Rudnicky, whom the Soviet government managed to recruit, provided a great deal of help in removing Father Zavalniuk from his duties

For some time these two parish council members managed to conceal their dual role, but soon they were reminded that not only their own people are repelled by traitors but also repelled are those who use their services.

The Destruction of a Chapel

In the middle of a large forest between Kuršėnai and Žarėnai-Latveliai stood an 8 meter by 5 meter concrete chapel. Surrounding it were over fifty cement, wooden, and metal crosses. They were erected mostly as tokens of thanksgiving to God for restored health and other favors since people considered the spot miraculous. A spring flowed some 50 meters from the chapel, and it too was considered miraculous. In the chapel hung the greatly revered picture of the Mother of God of Perpetual Help. Before the war thousands of people came here for the Feast of the Ascension.

Recently the chapel was restored with the donations of the faithful; a beautiful Gothic altar was built, a floor was laid and a ceiling installed, and everything was repainted.

Old people say that those who perished during the uprising of 1863 were buried here.


Currently the KGB has greatly increased its repression of the underground press. Regardless of how difficult conditions become, the Chronicle will continue to be published. We ask our readers to strongly support its publication and distribution.