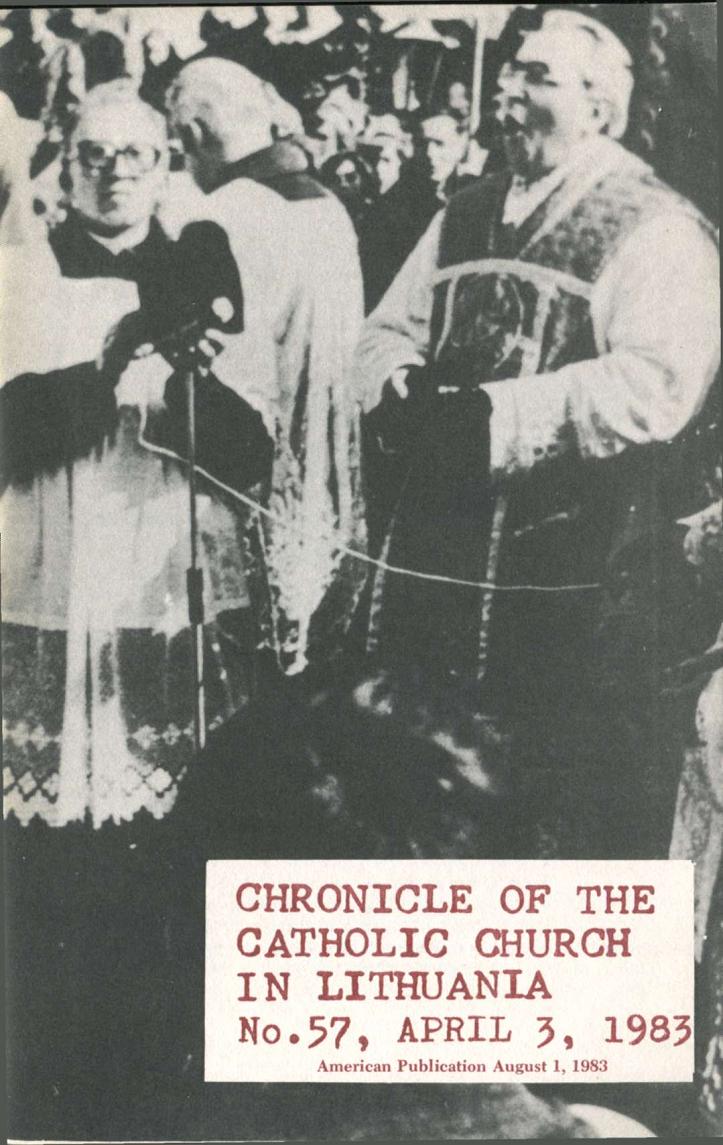 Read this and pass it on! If you can, make copies! Appearing since 1972.

CHRONICLE OF THE CATHOLIC CHURCH IN LITHUANIA , No. 57

3. Propaganda from the Council for Religious Affairs

5. A Gift from the Nation of Martyrs

6. News from the Dioceses

7. In the Soviet School

8. The Church in the Soviet Republics

The editorship of the Chronicle of the Catholic Church in Lithuania has been successful in collecting a large portion of the petitions which have been sent or taken by the faithful of Lithuania to various agencies of Lithuania or the Soviet Union, protesting against the arrest of Father Alfonsas Svarinskas. The petitions and excerpts from petitions given below will help, at least in part, to form some impression how the believing public reacted to the arrest of a priest who is dear to them.

The faithful of Prienai, in their protest addressed to General Secretary Andropov of the CPSU write, among other things:

"We, the faithful of the parish of Prienai, are deeply pained by and deplore the arrest of Father Alfonsas Svarinskas, Pastor of the parish of Vidukle, and member of the Catholic Committee for the Defense of Believers' Rights, together with his indictment for anti-Constitutional and anti-Soviet activity . . .

"In the face of this painful fact, we state that we have defended our nation's priests, and we will continue to defend them, asking God that they be courageous in defending the truth, God, the Church and the affairs of us believers.

On January 26, 1983, in the apartment, garage and attic of the Associate Pastor of the Parish of Gargždai, Father Antanas Šeške­vičius, a search was carried out, with A. Barasevičius, Klaipėda Investigator for Special Cases, in charge. During the search, the chekists looked for the archives of the Catholic Committee for the Defense of Believers' Rights, and for literature libeling the Soviet system. Seized were; two typewriters (one belonging to Father Šeškevičius, the other to the organist), ten audio tapes with recordings of sermons and hymn-singing, copies of correspondence sent to government organs and other documents, thirty-one in all; from the attic, Chronicle Number 55 was taken.

PROPAGANDA FROM THE COUNCIL FOR RELIGIOUS AFFAIRS

On February 28, at the offices of ELTA in Vilnius, (Trans, note — ELTA, from LTA, acronymic for "Lietuvos Telegramų Agen­tūra — the Lithuanian Telegraph Agency. The name was taken over, along with the agency, at the time of the Soviet occupation. Not to he confused with ELTA Information Agency, sponsored by the Lithua­nian National Foundation, in the free world.) a closed lecture for members of the press was given by the Assistant Commissioner for Religious Affairs, E. Juozėnas. Listeners were told not to take notes. Following are the speakers' main ideas.

The speaker presented statistical data about the general status of the Catholic Church, and of other religious groups, and remarked that this is a tangible force in our republic.

Directives for Catholics come from the Vatican. The situation is not normal, since religious extremists are active, anti-social sermons are being preached, and Soviet activists are vilified. Priests urge people to disobey the law. There are about fifty extremist priests, the most active of whom is Alfonsas Svarinskas. Signatures are being collected among the public to petitions, e.g., "Let us struggle against the murder of priests!"

Underground publications are prepared directed to Vatican Radio and the Voice of America.

WHOM DO YOU SERVE?

To the editors of the newspaper, Tiesa: Esteemed Editors,

Making use of the freedom of press and of speech guaranteed by the Constitution, Par. 50, I come to you, asking that you publish in Tiesa, this petition of mine:

Having read your article, "Whom Do They Serve?" published in Tiesa, February 6, 1983, I would like to ask you: And whom do you serve? Your nation, or its enemies? The truth, or a lie. The article is long. In it you touch on many problems, and all the questions raised. I do not dare touch upon at this time. Let us try to look together at least at some points in the article.

You rejoice, for instance, "that fewer and fewer people are enthralled by religion, that the process of secularization is taking place according to plan, that changes are taking place in the believer himself, and in his relationships with religion and the Church." In brief, you are pleased with the victory of atheism in our nation. Yes, in part, you are right. In the past forty-three years, no small part of our nation, especially the younger generación, has become secularized.

But let me ask you, at what price? Perhaps by the peoples' free self-determination? Alas, no. The entire secularization is taking place after making atheism the state religion, forcing atheism on children, all the way from the kindergarten and practicing discrimination against believing pupils in the schools. By punishing schoolchildren for participating in religious ceremonies, lowering their conduct mark, giving poor recommendations to graduates, threatening that they will not get into institutions of higher learning and ridiculing believing schoolchildren — in this way, the right to educate children according to their own beliefs is taken away from believing parents, and teachers are ordered to graduate the children of believing parents as convinced atheists. And if we add the press, radio and television of which the faithful may not avail themselves, then it will be clear at what price the secularization and atheiza-tion of a part of our nation has taken place. It has taken place by discriminating against believers, and by violating Par. 50-52 of the Soviet Constitution.

A GIFT FROM THE NATION OF MARTYRS

A few years ago, the Catholics of Ireland gave the persecuted Catholics of Lithuania a symbolic gift: A small statue of Mary which was supposed to go to the Shrine of Our Lady of the Dawn Gate in Vilnius. The Soviet government would not allow the statue to be taken to Lithuania, and so it was temporarily kept in the Church of St. Casimir in Dublin.

In January, 1983, an "ecumenical delegation" of clergy from the Soviet Union travelled through England and Ireland. The delegation was arranged by the Council for Religious Affairs, and its purpose was not ecumenism, but propaganda: In the Soviet Union, there is freedom of religion. In Moscow during the briefing session on how the clergy should conduct themselves during the trip, the Dean of Šakiai, Msgr. J. Žemaitis, asked a responsible staff member of the Council for Religious Affairs what he should do if the Catholics of Ireland asked him to deliver the statue of the Blessed Virgin Mary to Lithuania.

All the bishops of Lithuania received an invitation from the Vatican Secretariat to pay an official visit to the Holy Father. Among those invited was also the exiled bishop, Julijonas Steponavičius. However, the Soviet government, fearing lest its plans with regard to the Catholic Church in Lithuania collapse, did not allow the exiled bishop to go to Rome, deceitfully arguing that there was too little 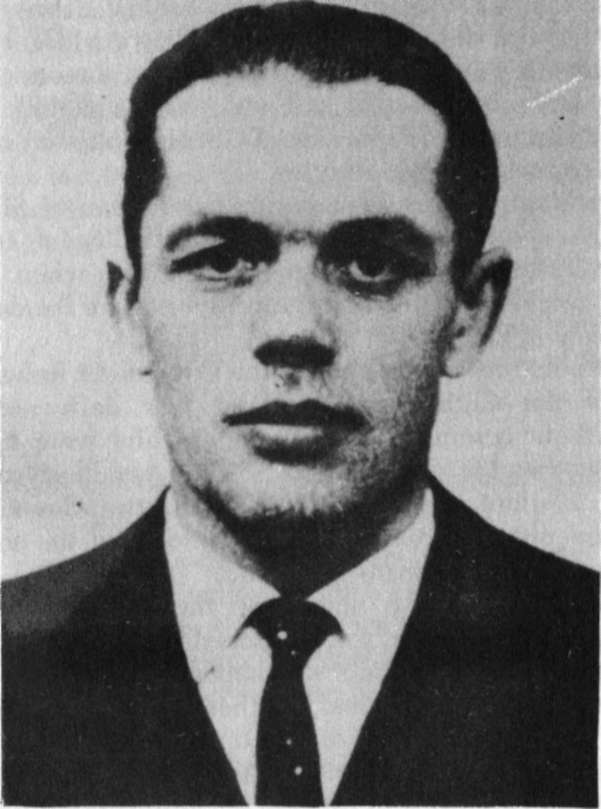 Povilas Pečeliūnas, having finished his term in camp, was taken to exile in the far north. His present address is: 626806 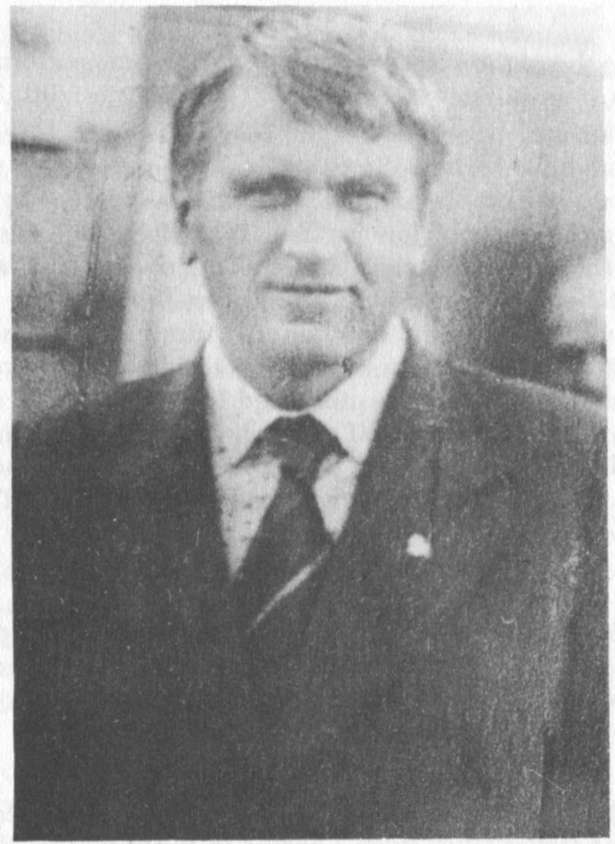 Since December 19, 1982, Antanas Terleckas has been carrying out his sentence of exile in the far east. His address:

On December 15, 1982, the Editors of Tarybinis mokytojas (Soviet Teacher), printed Vytautas Mockevičius' article, "Advokatas be įgaliojimų" (Lawyer without a Brief), in which he accuses the Gargždai parish Associate Pastor Antanas Šeškevičius of complaining without mandate to the Klaipėda Rayon Division of Peoples' Educa­tion concerning the atheistic education of pupils in Gargždai middle schools, and thus, violating the directive of the Presidium of the LSSR Supreme Council. On December 18, 1982, the aforesaid article was reprinted in the Klaipėda Rayon newspaper, Banga (Wave).

Teacher (Mrs.) J. Skurskienė, of Gargždai Middle Schools I and II and their parents (about two hundred signatures), sent a petition to the Department of Education of the LSSR, in which they bring up examples of discrimination against believing schoolchildren.

Teacher (Mrs.) J. Skurskienė, of Gargždai Middle School I, asked her sixth class pupils who of them believed in God, who is doubtful, etc. On February 2, 1982, Teacher (Miss) Berčytė of Gargždai Middle School I, organized an anti-religious contest. Into the school auditorium, she drove fifth and sixth class students, all together, about one hundred fifty boys and girls. All of them were told to write compositions and to draw sketches on anti-religious themes. They promised to give prizes to the best.

THE CHURCH IN THE SOVIET REPUBLICS

In 1982, before Easter, the Uniate Catholic church of Morshyn was burglarized. Pupils of the vocational school, herded into church gathered up all the liturgical vessels, vestments and icons, piled them into automobiles and drove off with them.

and others who wear the shackles of bondage so that you might be able to live and believe in freedom!