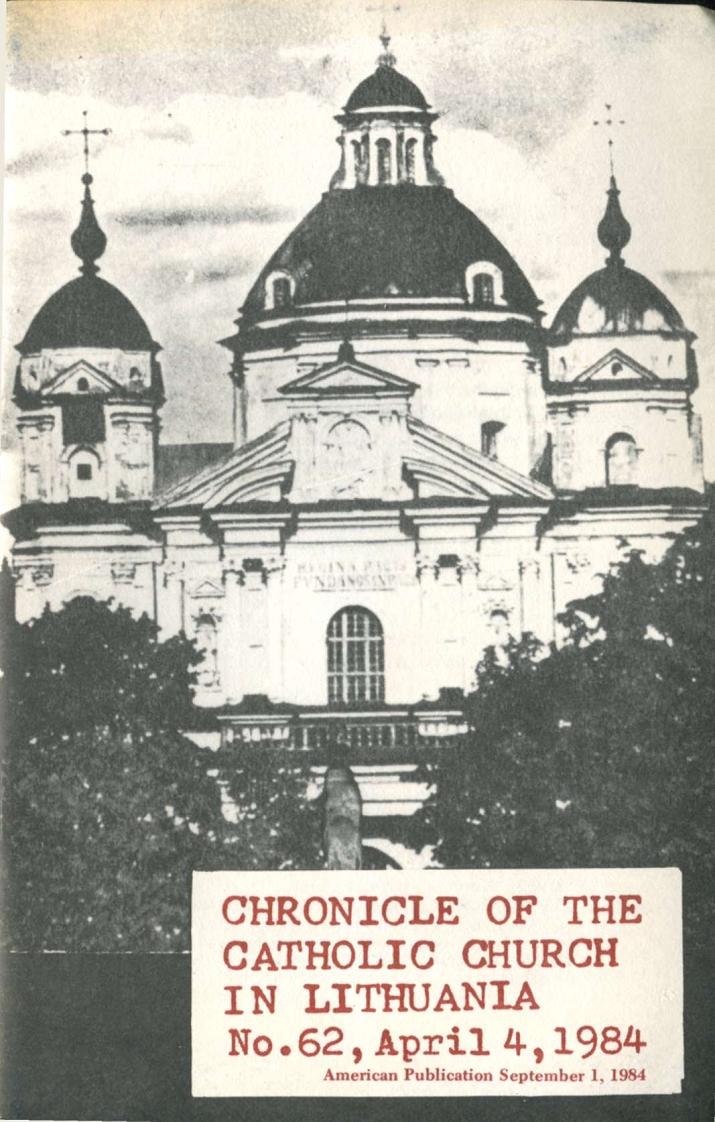 Appearing since 1972 Read this and pass it on!

This issue is dedicated to the 500th Jubilee of the Death of Saint Casimir, asking his protection for the Church in Lithuania and for all those suffering for religion and for truth.

CHRONICLE OF THE CATHOLIC CHURCH IN LITHUANIA, No. 62

1. Echoes of the Celebration of the 500 Year Jubilee of the Death of Saint Casimir

2.   Protests on behalf of the Arrested Priests, Fathers Alfonsas Svarinskas and Sigitas Tamkevičius, Do Not Diminish .

5.   News From the Dioceses

March 4, this year, marked 500 years since the death of Saint Casimir, Prince of Lithuania. Our nation is celebrating this great jubilee under the difficult conditions of atheistic oppression; in the words of Pope Pius XII, "In circumstances more tragic than any in the history of Lithuania," these words are confirmed by the rampaging of the atheists as the Jubilee of Saint Casimir approached.

It was difficult for Catholic Lithuania, under the oppression of Czarist Russia. At that time, also, the veneration of our national Patron, Saint Casimir, was restricted. The censors of the Russian Czar struck from the old hymnbooks a hymn about Saint Casimir which our people had sung for two hundred years:

The land of Lithuania languished For seven years in subjugation. But God did her a great favor Granting a patron ready to help her. Saint Casimir came from heaven, The soldiers saw him in the sky. Afterwards, they beat the Russians so badly, Rescued the weeping people from captivity...

So sang our ancestors commemorating the Russian incursion of 1655 into Lithuania. In our days also, in preparation for the 500 Year Jubilee of Saint Casimir, when the bishops of Lithuania were officially allowed to publish a little Catholic Calendar, a booklet and a jubilee holy card, Soviet censors deleted from them a bio­graphy of the saint prepared by a neutral liturgical commission.

Catholic Lithuania thanks you with all its heart for the attention and love which you showed her in honoring the Jubilee of Saint Casimir, Patron of Lithuania.

The solemn services in Saint Pater's Basilica, the Holy Mass offered by you for Lithuania and its Church, your warm paternal words addressed to the believers of Lithuania, your telegram to the bishops of Lithuania and to participants at the opening of the jubilee in Vilnius, indulgences granted to those visiting the tomb of our saintly patron, encourage us to be faithful to Christ and His Church with greater love and sacrifice.

Thanking you, Holy Father, for your obvious fatherly love and attention to our little country, we pray God's blessing and generous graces for you.

Catholic Lithuania, beginning its seventh century of Christianity under difficult conditions of atheistic oppression, is determined to guard Saint Casimir's spiritual testament, to struggle and sacrifice in order that the Light of Christ would shine in our days, too, in our homeland, and throughout the world.

PROTESTS ON BEHALF OF THE ARRESTED PRIESTS, FATHERS ALFONSAS SVARINSKAS AND SIGITAS TAMKEVIČIUS, DO NOT DIMINISH

To: The Editors of Tiesa

Copies to: Their Excellencies the Bishops of Lithuania and Administrators of the Dioceses

Taking advantage of the freedom of speech and of the press guaranteed in Article 50 of the Constitution of the USSR, I ask you to print this public statement of mine:

An Open Letter to Correspondent Mockuvienė

Upon reading your article entitled, "The Rosary in One Hand, a Stick in the Other," published in Tiesa (Truth), December 3, 1984, I was surprised by its bias. The purpose of the article was to dis-inform the public, libeling a good and zealous priest in order to justify the transgressions of the atheists of Lithuania.

I must say that you picked a good title for your article, "The Rosary in One Hand, a Stick in the Other". In your desire to demean Father Sigitas Tamkevičius, you very accurately described his posi­tive character traits: his deep priestly spirituality, and his courage in the struggle for the truth.

Father Sigitas Tamkevičius truly holds not in his hand, but in his heart, a stick with which he has struck our atheists hard, defend­ing the rights of believers. However, that stick is not material, but spiritual. The stick of truth, directed not against the system and not 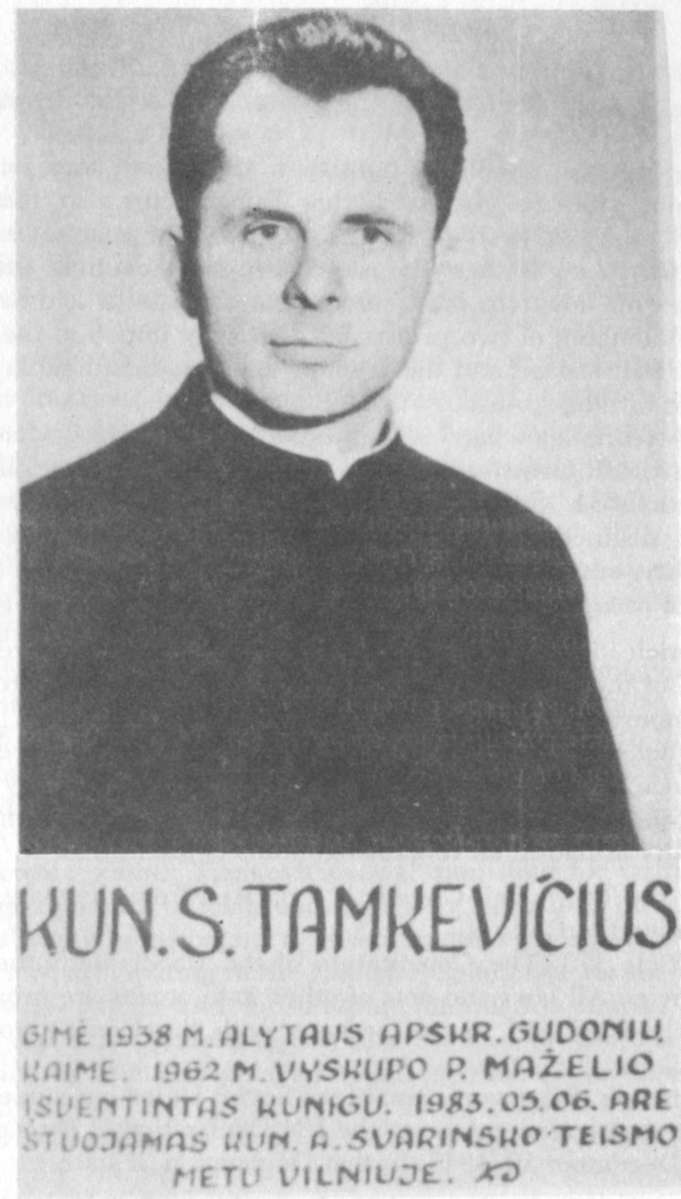 The June 22, 1983 edition of Kauno tiesa (Kaunas Truth) printed Bronius Jauniškis' "Open Letter of an Atheist: 'I Do Not Fear Calumny' ", which ELTA (ELTA, from LTA, acronymic for "Lietuvos Telegramų Agentūra"— the Lithuanian Telegraph Agency. The name was taken over, along with the agency, at the time of the Soviet occupation. Not to be confused with ELTA Information Agency, sponsored by the Lithuanian National Foundation, in the free world. — Trans. Note) later sent out to newspapers of the various rayons, after changing the title to, "I Do Not Fear Black­mail". In this as in other articles by Jauniškis, there are many dis­tortions and lies.

1. "I do not fear calumny," writes Jauniškis. I wholeheartedly concur with this statement on his part. Jauniškis really has no reason to fear calumny, since no one is calumniating him. Only HE IS CONSTANTLY CALUMNIATING OTHERS, AND WRITING UNTRUTHS.

On December 14, 1983, the leaders of all religious groups in Lithuania were summoned to Vilnius before the Commissioner for Religious Affairs, Petras Anilionis: Bishops of the Catholic Church —Bishop Liudvikas Povilonis of the Archdiocese of Kaunas and the Diocese of Vilkaviškis, Bishop Vincentas Sladkevičius of the Dio­cese of Kaišiadorys, Msgr. Kazys Dulksnys, Administrator of the Diocese of Panevėžys; Administrator of the Archdiocese of Vilnius, Algis Gutauskas. (Bishop Antanas Vaičius of the Diocese of Telšiai did not come on account of illness.) Orthodox Archbishop Viktorin, Chairman S.S. Jegorov of the Supreme Council of Old Believers and Evangelical Bishop Kaivanas.

It was suggested that they sign a text prepared in advance, on behalf of peace, condemning the Americans and exaulting General Setretary Yuri Andropov of the Central Committee of the Commu­nist Party of the Soviet Union. Bishop Povilonis and Bishop Slad­kevičius rejected the prepared text, suggesting that each sign his own text. Orthodox Archbishop Viktorin and Old Believer Supreme Council Chairman Jegorov, would not agree with such a suggestion of the bishops, and refused. Then Anilionis suggested that they sign a more tactful document.

On December 29, 1983, Father Leonas Kalinauskas, Pastor of the parish in Josvainiai, and member of the Catholic Committee for the Defense of Believers' Rights was summoned to the Office of the Prosecutor of the Lithuanian SSR. Prosecutor Bakčionis ac­quainted Father Kalinauskas with the text of a warning, as follows:

"The Committee for the Delense of Believers acted without government permission, and without authorization, since October, 1980.

"Together with the convicted priests, Alfonsas Svarinskas and Sigitas Tamkevičius, they created, signs and disseminated no less than sixteen such documents. In these writings, the policy of the Soviet government with regard to the Catholic Church and believers is libeled.

"Systematically, these documents are placed in the illegal anti-Soviet publication, the Chronicle of the Catholic Church in Lithuania.

"In various ways, these publications are sent abroad, where they are widely used for propaganda, damaging the international prestige of the USSR.

Aušra ("The Dawn"), Nr. 37, appeared in June, 1983. The publication is dedicated to Catholic Committee for the Defense of Believers' Rights members Fathers Alfonsas Svarinskas and Sigitas Tamkevičius. In the introductory article, the arrest of these priests is characterized as an action by the totalitarian Communist government in an effort to destroy the Catholic Committee for the Defense of Believers' Rights itself. In the publication, much space is devoted to deciding the problem of Russification in Lithuania. Attention is given to the abnormal situation of Lithuanian young men in the Soviet army, and considerable space is devoted to a detailed discussion of the historical era of Lithuania from 1919 to 1939.