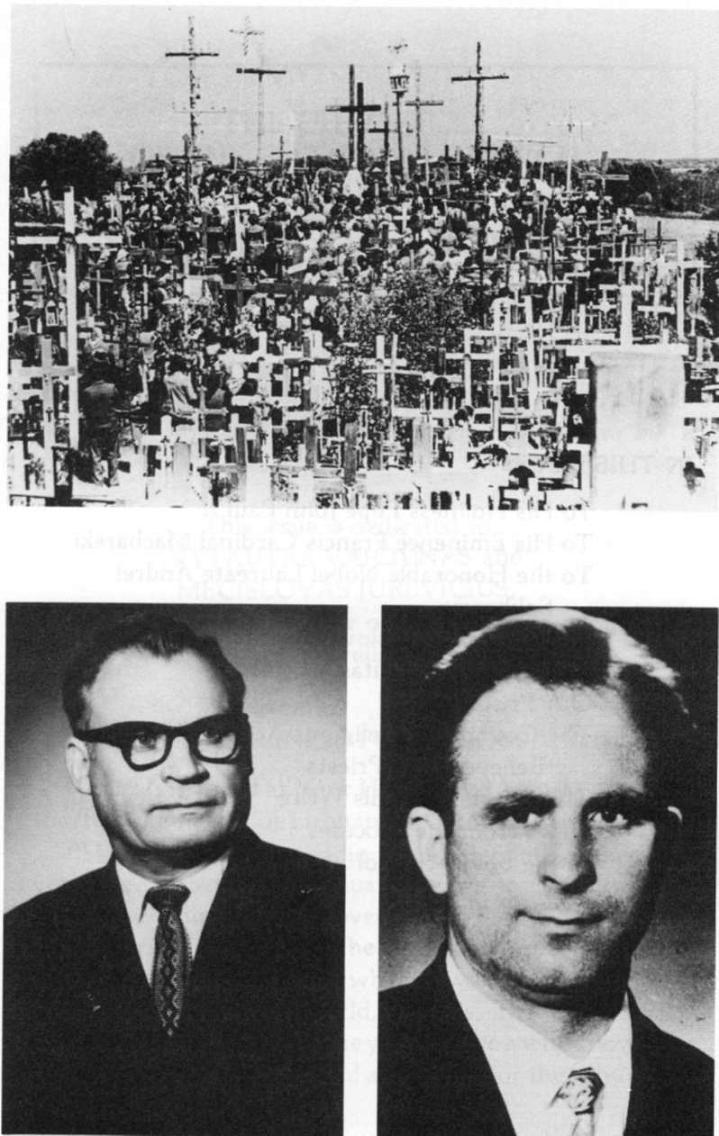 Top, The Hill of Crosses; bottom, left, Mečislovas Jurevičius, and right, Vytautas Vaičiūnas; both were sentenced for organizing a religious procession.

This issue is dedicated to
VYTAUTAS VAIČIŪNAS and
MEČISLOVAS JUREVlČlUS,
who have sacrificed their own personal freedom
for the cause of religious freedom

"The shots fired at Your Holiness on May 13 painfully touched the hearts of Lithuania's Catholics also.

"Having learned by radio of this terrible attempt on your life, all believing Lithuania prays to the Almighty, asking for your speedy recovery, Holy Father, so that you may return to the helm of the Church as soon as possible. We understand perfectly what it would mean to the Catholic Church, the world, and us, the Catholics of Communist countries, to lose you now, you who know how to speak so courageously and accurately for the 'Church of Silence.'

"We thank you again for your love for us, the Catholics of Lithuania, for the warm Lithuanian words you have spoken on various occasions, and for the prayers with which you accompany us on our Way of the Cross.

TO HIS EMINENCE FRANCIS CARDINAL MACHARSKI

"On May 31, 1981, we, the Catholics of Lithuania, listened to the proceedings of the funeral of the Primate of Poland, Stefan Cardinal Wyszynski, via Warsaw Radio with prayers on our lips. We could not attend personally but were with you in our hearts.

"For several decades we have observed the heroic struggle of the Polish episcopate under the leadership of Stefan Cardinal Wyszynski in defense of the rights of the Church and human rights in Poland, and we drew inspiration from this struggle more than once. The death of Stefan Cardinal Wyszynski is a painful loss not only for you, but for all who struggle for the kingdom of Christ and for a more humane world.

"Your Eminence, please accept our expression of condolence, respect, and love.

"We, Lithuanians of good will, accompany you in our hearts on your path of suffering and sacrifice. We learned by radio that you celebrated your honorable sixtieth birthday on May 21. Together with all the world's people we congratulate you, pray for you, and wish you good health and endless strength in your fight for the degraded and scorned man without rights.

On March 25, 1981, the Lithuanian Helsinki Watch Group member Mečislovas Jurevičrus was arrested in Šiauliai at 6-10 Spindulys St. The apartment was searched in the presence of the interrogator for special cases, Jurisconsult Norkūnas, Police Lieutenant A. Auga, four Chekists, and the witnesses Vytautas Šlaminas and Kęstutis Snyka.
The following items were confiscated:
- 19 tapes and cassettes
- a German postage stamp
- 20 stamps
- five telegrams of varied content
- some 50 photographs (of a religious procession)
- a sheet of notepaper with telephone numbers
- the book Žvaigždė (Star)
- 20 issues of the magazine Savaitė (Week) (1942-44)
- prewar newspapers
- two maps of Lithuania
- 4 pieces of paper with prayers
- 6 small booklets containing religious texts.

THE TRIAL OF VYTAUTAS VAIČIŪNAS

On March 25, 1981, two Chekists came to see [Mrs.] Vaičiūnienė at work. They informed her that her home was being searched and that her husband wished to see her. They took her with them.

Upon returning home, she did not find her husband there. It was later learned that her mother's property, where they kept their car, was also searched.

The security agents ordered Vaičiūnienė to take along some food and took her to police headquarters. When she demanded to see the search report, the security agent explained that this was none of her business, that her husband had it.

"Well send you everything by mail," promised Interrogator Jucys.

When Vaičiūnienė blessed her husband with the sign of the cross during their meeting, she was quickly removed, apparently because the Chekists feared that the wife's calm and courageous gesture would make a great impression on her husband, whom they were attempting to break down in various ways.

"An Appeal to the Leaders of European Communist Parties

"During December 18-22, 1980, I was tried in Vilnius together with the Lithuanian-language scholar Povilas Pečeliūnas and university lecturer Vytautas Skuodis for propagating socialism with a humane face; for writing poems and poetic works praising goodness, freedom, truth, and friendship (the works are unpublished); and for yearning, on the basis of the Constitution, for Lithuania to secede from the USSR and become a free and independent socialist state.

"I appeal to all people of good will, especially to all the leaders of European Communist parties, to do their utmost to see to it that we are granted freedom by petitioning the Prosecutor General of the USSR to review, in the presence of attorneys from European countries, the case fabricated against our group."

THE COUNCIL FOR RELIGIOUS AFFAIRS "INSTRUCTS" BELIEVERS AND PRIESTS

Šiauliai
On March 11,1980, representatives of the rayon's parish councils were summoned to the City of Šiauliai Executive Committee offices. Religious Affairs Commissioner Petras Anilionis attempted to prove that full freedom of belief exists in Lithuania.

When the representative of the Church of Saints Peter and Paul in the City of Šiauliai asked why so few catechisms were published, the commissioner explained that there was a shortage of paper.

The executive committee representative, [Mrs.] Gaurilčikienė, praised (that is unfortunate — Ed.) the current management of the Šiauliai churches and voiced her delight that Soviet regulations are not being violated here.

Kėdainiai
On March 18, 1981, Vice Chairman A. Juskevičius of Kėdainiai Rayon summoned the representatives of the rayon's parish councils. Some of the members refused to come. The Assistant Religious Affairs Commissioner explained that the Regulations for Religious Associations made parish council members and deputies of township Soviets responsible for the violation of these regulations. He ordered them to keep watch over the activities of priests, to monitor their sermons, and see to it that they did not violate Soviet laws by instructing children or allowing them to serve at mass, etc.

'We, the members of the Diocesan Priests Councils of the Lithuanian Roman Catholic Church, elected representatives of the clergy, find it necessary to state the following:

"1. The Catholic Church was established by Our Lord Jesus Christ. It has a hierarchical structure. The head of the Church is the pope in Rome, the successor of St. Peter. The Priests Protest Commissioner's Activities 509 bishops, the successors of the Apostles, help the pope govern the Church. The priests help the bishops. Bishops appoint priests who are called pastors to supervise parishes. Pastors pledge to the bishop that they will be conscientious administrators of the parish and its church. Parish councils are elected from among the believers to fulfill the needs of the Church. The councils are directed by the pastor or a priest who performs the duties of a pastor. The council cannot act without the pastor; otherwise, it incurs ecclesiastical punishment.

Grinkiškis
The reply received from Father Juozas Vaičekauskas by members of the Review Commission monitoring observance of laws concerning religious cults attached to the Executive Committee of Radviliškis Rayon was as follows:

"In their open letter to Fathers Juozas Vaičekauskas and Antanas Jokubauskas, printed in the rayon newspaper Komunizmo Aušra (Communist dawn) on April 8, 1981, the members of the review commission wrote the following in reply to the question'Who governs the Catholic Church?': 'We can answer you, pastors. The Catholic Church is governed by the believers themselves. To serve their religious needs, they either invite or receive from the diocese a cult minister, whose only duties are to perform religious rites and ceremonies and nothing else.'

"You are mistaken, dear atheists from the Radviliškis Rayon Executive Committee, and you are misleading others, but it is unclear whether this is being done consciously or out of ignorance! The Catholic Church is governed by the pope in Rome and the bishops. I quote, 'This Council has decided to declare and proclaim before all men its teaching concerning bishops, the successors of the Apostles, who together with the successor of Peter, the Vicar of Christ and the visible head of the whole Church, govern the house of the living God' (Dogmatic Constitution on the Church, Decisions of the Second Vatican Council, p. 42).

" 'With their helpers, the priests and the deacons, the bishops have taken up the service of the community, presiding in place of God over the flock whose Shepherds they are, as teachers of doctrine, priests of sacred worship, and officers of good order' (ibid., p. 43).

Pašilė (Diocese of Telšiai)
On October 11, 1981, Algirdas Stonys began serving at masses in Pasile. Several days later, his teacher, [Mrs.] Aranauskienė, stood Algirdas in front of the class and began to ridicule him in a number of ways: "What do you get there? Do you return well-fed from the church?" etc.

March 8, 1981, marked the beginning of Lent. The young people of Pašile gathered at the home of Antanas Saunoris, the church custodian, to sing the meditations of Christ's Passion called "Hills of Žemaičių Kalvarija." The next day Aranauskienė tried to intimidate and scolded the students who had participated and ridiculed the schoolgirl Laima Jurgelevičiūtė in a number of ways. "Aren't you ashamed? You are a good student, and you dare to go and sing! Shame on you!" shouted the teacher.

Ariogala (Raseiniai Rayon)
In February 1981 the homeroom teacher [Mrs.] Kadienė pressured the ninth-grade student Arvydas Liepa to enroll in the Communist Youth League. He kept resisting. The teacher then ordered him to write an atheistic composition and gave him atheistic literature to read. The boy kept the books that were forced on him but did not write the composition. Losing her patience, Kadiene went to see the student's mother, telling her to influence her son, threatening that her son would otherwise not gain admission to a school of higher education. Liepienė asked the homeroom teacher, "Does the Soviet educational system teach children to be hypocrites? My son is a believer and would become a hypocrite if he joined the Communist Youth League because he would still want to attend church. I believe that my son will grow up better by attending church than by joining the Communist Youth League."