On October 11, 1982, from 8:00 AM to noon, a search was made in the rooms of Jonas Sadūnas, Marytė Sadūnienė and Nijolė Sadūnaitė. The decision to carry out the search was sanctioned October 10, 1982, by Prosecutor N. Krempovski of the Vilnius Rayon, LSSR. The order states that LSSR Assistant Prosecutor (Miss) R. Juciūtė, having acquainted herself with Criminal Case No. 57-2-031-81, regarding libel of Petras Dūkštas, Director of the Vokė Experimental Farm in the Vilnius Rayon, and having determined that on the basis of preliminary investigation she had grounds to believe that at the home of Jonas Sadūnas, living at Architektų 27-2, Vilnius, manuscripts in Sadūnas' handwriting could be found, she decided to carry out a search for Sadūnas'manuscripts.

The search was carried out by Juciūtė and a man in civilian garb, undoubtedly a chekist, who did not present idetification, or even give his name, in the presence of witnesses brought in by Juciūtė: (Mrs.) Neonila Untulienė and (Mrs.) Nijolė Rulevičienė. The chekist in charge of the search would not let Sadūnas call his place of employment to tell them that he could not come to work. Only after much pleading did the chekist allow Sadūnienė to take her six-year-old daughter to kindergarten. Since Juciūtė would not let Sadūnienė go alone, Witness Untulienė offered to accompany her; but Juciūtė ordered Witness Rulevičienė, whom she trusted, to accompany her instead.

The search was begun in Jonas Sadūnas' room. The chekist spent a long time going through all postal receipts, telegrams and religious books. He took the registration slips for seventy-eight registered letters written to political prisoners, (among them, fifteen addressed abroad). He was interested in all letters, including those written by Nijolė Sadūnaitė.

Afterwards, he ordered the doors to the balcony opened, and pulling out an old briefcase lying among boxes, he opened it and found — vegetables. Returning to the room, he asked that the record player be opened. Annoyed, he picked up the sofa and checked what was underneath. Disappointed at not finding any­thing, the chekist made a phone call:

Finishing the search of Jonas Sadūnas' room, the chekist took al­most everything written in Sadūnas' hand, copies of inquiries to the 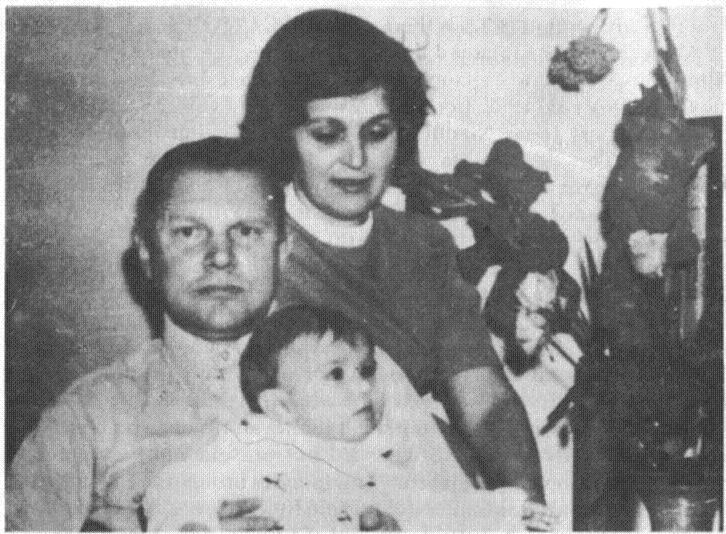 Jonas Sadūnas, his wife Marytė and daughter Marija in a 1978 photograph.

In Marytė Sadūnienė's room, the chekist was very interested in her little daughter's postcards, examined them all carefully, and finding one of them some colored bands: green, yellow, red, and again green, with the notation "Marija" (This is the little girl's name.), he loudly demanded, "So you're teaching your daughter from child­hood to draw the flag of bourgeoise Lithuania! Take that card and include it in the list of things confiscated during the search!"

When Sadūnienė calmly explained that the arrangement of colors was not right for that, the chekist shouted that they were the same colors, but he left the postcard behind.

"Whose are they? Where did you get them? Why so many?

Who reproduces them? Take them all!"

When Sadūnas explained that they were his, and that he brought them to give to friends — something which is not forbidden — they left the pictures alone.

The chekist asked where Nijolė Sadūnaitė was at the moment, whether she lived there, etc. He wanted to confiscate two snapshots: His Excellency Teofilius Matulionis and nine priests just back from Soviet prisons. When Sadunas protested that they had come, not for pictures, in which only chekists are interested, but to take his manuscripts, they left him alone.

Juciūtė wanted to take a thick notebook belonging to Nijolė Sadūnaitė, containing several hundred addresses in twenty foreign counties (those people who had written to her in Siberia) arguing that several dozen of the addresses were written in Sadūnas hand. Sadūnas protested that the notebook was his sister's and they left it.

The searchers were most interested in those things which are of the greatest importance to chekists: addresses, telephone numbers, acquaintances, religious literature, religious cards, letters, receipts, etc.

They also took some letters of Nijolė Sadūnaitė written in 1977 from the camp in Mordovia, and copied in Sadūnas hand. The chekist shouted, "So, you have been copying Nijolė Sadūnaitė's letters?"

Sadūnas answered that these letters were written not to him, but to others, and that he had made copies for himself.

In October, Juciūtė summoned Sadūunas twice for questioning, but he was unable to go because he was suffering from myocarditis, and was recuperating at home. On October 28, he entered the hospital. The next day, (October 29) at 9:40 in the morning, Juciūtė called the hospital and informed them that on November 1, she would come to the hospital and question Sadūnas. Sadūnas asked that the questioning be postponed for a few days because he was feel­ing poorly — his temperature was elevated — but the investigator would not give in.

At 3:15 PM, November 1, 1982, Jonas Sadūnas was summoned to the Office of Division Chief R. Norgėla where he found Juciūtė waiting. She wrote down some of his biographical data in the witness interrogation report, and asked what his connections were with the Director of the Vokė Experimental Farm, Petras Dukštas.

Sadūnas replied that they were good. Juciūtė had brought one complaint written to the LSSR Minister of Internal Affairs. Sadū­nas explained that he had not written the complaint.

Juciūtė cited excerpts from complaints to the LSSR Prosecutor, the editors of the magazine Šluota (The Broom), etc. Sadūnas replied that he had not written any complaints to the aforesaid addresses. He had written one report only to the Chairman of the LSSR Peoples' Control Commission and a similar one to the Chairman of the Vilnius Rayon Council of Workers' Deputies Executive Committee. But that was not libel.

Later, Juciūtė told him to copy a long article from the news­paper on three pages of unlined paper and one page of lined paper.

At about 6:00 PM, Juciūtė left, telling Sadūnas to call her im­mediately on his return from the hospital.

On September 9, 1981, the Peoples' Court of the City of Vilnius, Lenin Rayon, sentenced Eduardas Bulach, a resident of Viršuliškių 71-8, Vilnius, according to Par. 211, Id. of the LSSR Criminal Code, to one year in the general regime collective work colony at Pravieniškės.

On September 8, 1982, Eduardas Bulach ended his sentence, but he did not return home. The Prosecutor's Office of Vilnius, on September 9, in Communication no. 2077, informed E. Bulach's wife, Svetlana Alexeyevna, that her husband had been re-arrested September 9, on the suspicion of having perpetrated an offense provided for in Par. 199 of the LSSR Criminal Code.

Prosecutor V. Markov explained to Svetlana Bulach, verbally, that her husband had been arrested for writing some sort of letter.

On August 26, 1982, Chekist Julius Česnavičius questioned Valerijus Smolkin. He was accused of assisting the families of politic­al prisoners. Among other things, Security Agent Česnavičius blurted out, "Some of your friends are abroad, others in camps, and there are times when some end up under a car, like Father Bronius Lauri­navičius . . ."

On October 1, 1982, in looking for contraband goods, a search was made of the apartment of (Mrs.) Jadvyga Bieliauskienė, a resident of Garliava, P. Cvirkos 41-2. The search was carried out by four men in civilian garb, who introduced themselves as repre­sentatives of the auxiliary police, with (Mrs.) Albina Dagilienė and her son Algirdas as witnesses.

Militia Junior Lieutenant S. Piešinas noted in the record of the search that no contraband goods were found. When the search was over, both Bieliauskas' were driven off to the Kaunas Rayon Militia Department for questioning.

On October 5, 1982, in Garliava I Middle School, interroga­tions of pupils began, in an attempt to gather evidence against Garliava resident Bieliauskienė. The questioning began with the younger children.

On October 5, 1982, the following seventh-graders were sum­moned to the office of Garliava I Middle School Principal Nausėda: Redas Brusokas, Antanas Račyla and Albertas Gvozdas. The chekists told the children to write explanations and everything they knew about J. Bieliauskienė. Otherwise, if they did not admit that Bieliaus­kienė directs the believing youth of Garliava, giving them religious books to read, they would be thrown into the cellar, beaten, and would get a mark no higher than "2" in conduct, and finally, they began to threaten that the students would be taken off to a colony.

The chekists advised pupil Antanas Racyla, if he did not want to ruin his future, not to serve at Mass, and at the end of the inter­rogation they asked wheteher he knew how to draw the Vytis (Trans. Note — Knight errant — ancient Lithuanian national symbol), and ordered him to sketch one there and then. Asked where he learned to do so, Račyla explained, "From a ten Litas bill", but the investigator took the sketch and wrote on it: "Taught to draw by J. Bieliaus­kienė". Releasing the children, the chekists warned them not to tell anyone about the talks.

On October 6, 1982, the chekists threatened (Miss) Zita Dė-dinaitė that she would never get into any school, and for lying, would be punished with two years in prison. After her, eleventh-grader Mindaugas Babonas was summoned to the principal's office. During his interrogation, the chekist cursed and even tried to strike the pupil, and afterwards, took him to the Kaunas Security police, where he threatened to throw him in the cellar. That day also, eleventh-grader Daiva Naikeliūtė was also brought to Kaunas Security for questioning.

During interrogation, the chekists showed tenth-grader Valdas Tamošiūnas a fabricated search report, in which it was stated that during the search at the Bieliauskas home, much anti-Soviet literature was found, along with a radio transmitter. The investigator tried to convince Tamošiūnas that the Bieliauskas' were very dangerous criminals and that anyone not assisting in their discovery would be punished as accessories after the fact.

October 29, 1982. Seven individuals carried out a search of (Mrs.) Jadvyga Bieliauskienė's place. After the search, they arrested Bieliauskienė and took her away.

October 29, 1982. Seven individuals carried out a search at the home of Garliava residents, the Naikelius'. The investigators said that they had a search order, but they did not show it to the lady of the house. The search lasted from 10:00 AM until 2:00 PM.

The chekists carefully paged through every notebook, looking for underground literature and duplicating supplies.

After the search, they drove (Mrs.) Naikelienė to Security head­quarters for questioning. Chekist Urbonas asked her about (Mrs.) Bieliauskienė — whether she knew her, what she was interested in, etc.

August 20, 1982. At 10:00 AM, the Assistant Pastor of the church in Tauragė, Father Antanas Beniušis, was summoned to the Prosecu­tor's Office.

On the morning of August 20, people were gathering in church. After a brief period of prayer, about two hundred people, together with Father Antanas Beniušis, strode off toward the Prosecutor's Office. Militia officials, seeing the approaching crowd and the priest, became nervous . . .

Those who went did not fit in the building; some of them re­mained in the yard. Vice Chairman (Mrs.) R. Ulbienė asked Father Beniušis to come by the Prosecutor's Office. People expressed a desire to go with the priest, and Father Beniušis refused to go to the Prosecutor's Office alone. They were forced to look for a hall, but even this was too small to acccomodate everyone. Hence, a good number of those who had come were left outside the doors. Assistant Ulbienė tried to get the assembled young people out of the chamber, but no one moved.

In her talk, Vice Chairman Ulbienė expressed dissatisfaction with the sermons given by Father Beniušis during last year's devotions at Žemaičių Kalvarija. The faithful were not allowed to speak.

From the Prosecutors's Office, the people of Tauragė accom­panied the priest to church. Here Father Beniušis thanked everyone for the generosity they had shown, and requested that they not be lacking in it for those, too, who burn with hatred and to assist them with their prayers and sacrifices, just as they had assisted him today.