NOTES FROM THE CASE OF FATHER ALFONSAS SVARINSKAS

On the basis of the Court Decree, April 22, 1983, there are grounds for remanding the accused for trial. It would be point­less to summon to the trial the witnesses: S. Sotnichenko, B. Matuliauskas, P. Milius, A. Mačys.

Witnesses A. Keina, J. Kauneckas, V. Velavičius, V. Stakėnas, L. Kalinauskas and (Miss) Gavėnaitė failed to provide evidence about the facts in connection with the accusations brought against A. Sva­rinskas; hence, these witnesses are not invited to the trial either. There were twenty-one witnesses to testify regarding his sermons: three did not appear, eleven were Party members, four were members of the Communist Youth League and four were not Party members.

They also questioned Father Antanas Gražulis and some people from Igliauka, but they gave no testimony against Father Svarinskas, and so, they were not summoned to testify.

Trying the case was the Prosecutor for Special Cases, Egidijus Bičkauskas, hailing from Jeizna.

Having heard the case, the Judges' panel decided: "The accused, A. Svarinskas, seeking to weaken the Soviet government and under cover of the defense of believers' rights, from 1978 until January, 1983, systematically, in writing and by the spoken word, calumniated the Soviet governmental system and public order, and urged people to fight them. He demeaned the international prestige of the USSR. In sermons to believers and in documents prepared in the name of the so-called Catholic Committee for the Defense of Believers' Rights A. Svarinskas used to present distorted or fabricated material and libelous inventions, he extolled persons who had worked against the Soviet system, encouraged others to follow their example, and urged them to break Soviet law regulating the separation of the church from the state, and to disobey local government organs."

Originally, there were twenty nine sermons, but tapes recorded by the spies were ruined, so that only eighteen (sic. Another source adds two sermons from Miroslavas — Trans. Note) were left: four from Kybartai, four from Kalvarija, three from Viduklė, two from Šiluva, one from Žagarė, one from Pagramantis and one from Veiviržėnai. Here is what the decision of the court says about the sermons:

In them he stated that government organs have by administrative means, restricted the basic rights of believers and of the church, made young believers and students the special targets of discrimina­tion, persecuted laity and clergy, purposely refused to prevent attacks on clergy and churches, and did not try to find the real murderers of priests.

Not concealing his opposition to the Soviet system, Svarinskas tried in his sermons to demonstrate that in Soviet Lithuania, as a result of the socialist way of life, there has been a proliferation of such social vices as drunkenness, loafing, alcoholism, hooliganism, adultery and venereal diseases. Svarinskas urged that more efforts and time be alotted to the matter of the so-called "re-birth of the nation", and en­couraged resistance against the Soviet idea of order.

Expanding his anti-Soviet activity, Svarinskas, on November 13, 1978,   together with other individuals, without any mandate or permission from government organs, named himself the Catholic Committee for the Defense of Believers' Rights. In its name, he disseminated texts. From November, 1978, until September, 1982, he prepared no fewer than fifty one documents.

With that purpose in mind, on November 22, 1978, at the apart­ment of V. Kapitanchuk in Moscow, in a meeting with representatives of the bourgeois press arranged by members of the so-called "Chris­tian Committee", Svarinskas passed on to bourgeois correspondents the first four documents of the "Catholic Committee", and in June, 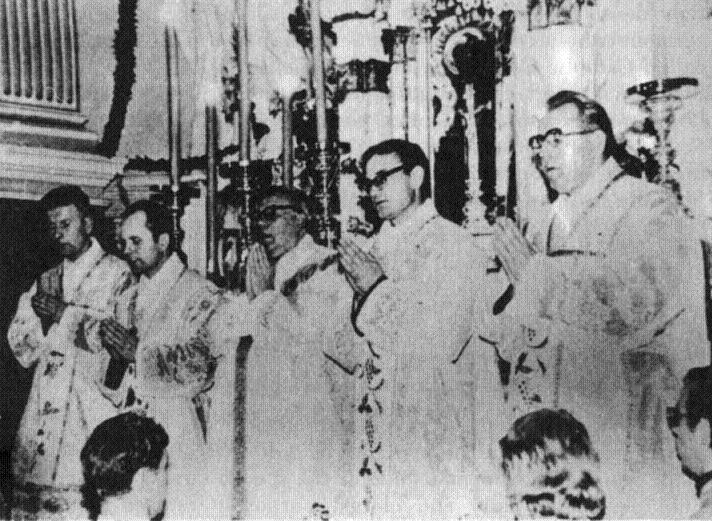 Foreign bourgeois propaganda organs made broad use of the writings of the libelous "Catholic Committee" in their activities against the Soviet system, put them in various publications and broadcast them in anti-Soviet radio programs.

Moreover, on November 22, 1978, Svarinskas participated in the creation, and himself signed, a joint statement of the so-called "Christian Committee", addressed to Pope John Paul II, other leaders of the Christian church, public committees defending believers' rights and US President J. Carter. In this document, it is stated that in the Soviet Union, believers are persecuted. Foreign insti­tutions are being instigated to interfere in the internal affairs of the USSR, and an effort is being made to encourage a propaganda campaign against the USSR.

For the same purpose, Svarinskas, on December 8, 1978, signed as a member of the Catholic committee associated with the so-called Moscow Helsinki Group, agreements to support "document" no. 69 entitled, "Thirty Years Since the Universal Declaration of Human Rights". In this petition addressed to world society, it is falsely claimed that in the Soviet Union, freedom of conscience and other civil rights guaranteed by the Constitution are violated.

For anti-Soviet purposes, Svarinskas, in February, 1982, created, proclaimed to believers in the church of Viduklė and after signing it himself, organized the solicitation of signatures to a petition addressed to the First Secretary of the Central Com­mittee of the Lithuanian Communist Party. In the petition, he wrote of the so-called terrorizing and persecution of believers' children in Lithuania. This document was reproduced and distributed in various cities and rayons in Lithuania, and signatures were solicited. A text of the document was included in the Chronicle of the Catholic Church in Lithuania', No. 54, and disseminated not only in Lithuania, but also abroad.

In 1980, Svarinskas obtained and kept in his home five copies of an anti-Soviet article contained in the anti-Soviet antholog Kontinent, and photocopies of the so-called Information Bulletin No. 2, of the Tatiana Velikanova Defense Committee. The three aforesaid photocopies of articles he handed over to Gustavas Gudanavičius in his apartment on June 17, 1980, for distribution.

During the trial, Svarinskas did not admit his guilt. He testified that he delivered the aforesaid sermons, that as a member of the Catholic Committee, he participated in signing, and he himself signed, fifty two documents. Four of them, he handed over to foreign correspondents in Moscow. Moreover he signed the "Christian Committee's" message to Pope Paul II, and Document No. 69 of the Moscow Group of the USSR Committee supporting the Helsinki Accords. He wrote, read in the church of Viduklė and himself signed a petition to the First Secretary of the Central Committee of the Lithuanian Communist Party, and organized the solicitation of signatures to it.

Svarinskas maintained that in his sermons, he did not libel the Soviet state, or the public order, but merely brought up shortcom­ings which occured, saying that many abused Soviet law and violated "the Constitutional rights of citizens".

Svarinskas indicated that they did not give him the aforesaid documents for abroad, but merely sent them to the addressees. He knew nothing of how the documents were used for anti-Soviet propa­ganda, or published in the Chronicle of the Catholic Church in Lithuania.

Svarinskas admitted saving photocopies of articles from Kon-tinent at home and giving three of them to Gustavas Gudanavičius, but denied that it is anti-Soviet literature. Svarinskas categorically denied that he had given documents of the "Catholic Committee" to US citizen V. Cukuras to take abroad.

The accusation against Defendant A. Svarinskas has been pro­ven.

Witnesses: Pranas Žukauskas, C. Valaiša, R. Lipinas, (Miss) J. Černiauskytė, Cemnolonskis, A. Didrevičius, V. Vidra, J. Rasimavi-čius, (Mrs.) M. Budinienė, (Mrs.) B. Arlauskienė, V. Labeikis, (Mrs.) N. Bernotienė, S. Stropus and others testified that they had heard Svarinskas' sermons . . . are of a libelous nature. For example, in the sermon which he gave in the church of Veiviržėnai, August 22, 1982, Svarinskas claimed that, "Among us, the atheists have tied the Church up, and are beating it. And they say that this is ideological warfare! No! Let's call things by their name. It is ideological hooliganism, which has continued for forty years in Lithuania."

In a sermon which he delivered in the church of Kybartai, June 24, 1982, he libelously affirmed that government organs, which he calls "atheists", prefer an intemperate nation. Hence he stated, "If our nation is completely 'sound" (trezvilka), we will accom­plish nothing... If Lithuanians are sober, they will begin to think, not about 'the sauce', but about spiritual values."

In his sermons, Svarinskas defended and extolled individuals who had been engaged in activities against the Soviet system, en­couraged others to follow their example, urged them to disobey Soviet laws regulating the separation of the church from the state, to dis­regard the interests of the state, and to devote more time and effort to the matter of the rebirth of the nation. For instance, in his sermon at Kybartai, April 24, 1982, Svarinskas, in turning his hearers against the Soviet system stated that this material (speaking about the material of the April, 1982 Plenary Session of the Central Com­mittee of the Lithuanian Communist Party) shows that the atheists have led the nation down a physical and spiritual blind alley.

Unambiguously inviting his listeners to join in a struggle against the Soviet system, in a sermon in the church of Varduva, July 2, 1980, he affirmed . . ."Seeing this destruction, let us not become passive, but on the contrary, let us go to war. The noble Christian is not the one who is able to describe the contemporary evils in life, but the one who knows how to work, fight, sacritice and, it necessary, die for the truth. Even now, there are many sons and daughters of the Church in various prisons and camps, and they are witnesses to the vital Faith of the nation . .."

The documents of the "Catholic Committee", drawn up with the participation of Svarinskas, and signed by him, are of a libelous nature. In them, an attempt is made to compromise Soviet laws regulating the separation of the church from the state; Petkus, Yakunin, Dudko, Skuodis and Sasnauskas, especially dangerous state criminals who have been found guilty, are extolled; their criminal activities are condoned, and for their arrest and conviction, Soviet organs of justice are blamed.

In this document, an attempt is made to show that in Lithuania, clergy and faithful are persecuted, children and youth are being spiritually crippled, and, as a result of atheistic education, a demean­ing of the person is going on and amorality is burgeoning. In many of these documents, sympathy and help is requested fro the so-called suffering Lithuanian nation.

In his apartment, Svarinskas kept for dissemination articles by Abduzachmanov Aytorchamov, The Untold Story of the Ribbentrop-Molotov Events, Abram Terz's, Men and Beasts, copies from the Kontinent anthology, and the memoirs of the former Cardinal Mindzenty of Hungary, In the Face of New Trials.

The panel of judges decided:

To find Alfonsas Svarinskas, son of Vaclovas, guilty of com­mitting the crime provided for in the Criminal Code of the Lithuanian SSR, Par. 68.1, and to sentence him to seven years deprivation of freedom, and to sentence Svarinskas to additional punishment of three years exile.

To sentence Svarinskas to carry out his penalty of deprivation of freedom in a strict regime corrective labor colony, as of January 26, 1983.

The verdict is final, not subject to appeal or protest.