ECHOES OF THE JUBILEE YEAR OF SAINT CASIMIR

On March 4, 1984, a small group of young people gathered from various places in Lithuania at the tomb of Saint Casimir in the Church of SS. Peter and Paul in Vilnius to pray, read verse and sing hymns.

At the beginning of June, 1984, the interrogations began in KGB offices, at work and in school, for participation in the commemoration of the Jubilee of Saint Casimir, and in the program which took place on that occasion. 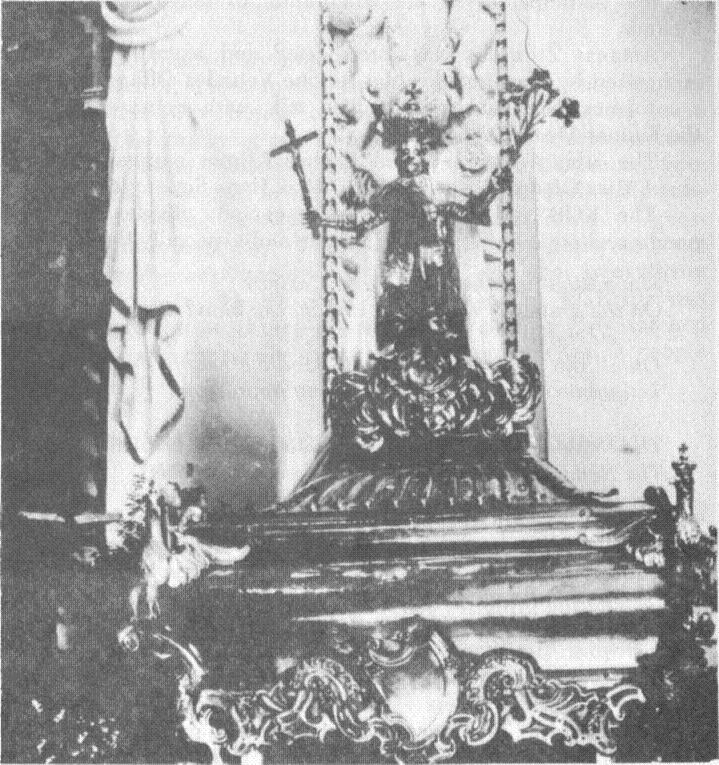 Tomb of St. Casimir over the high altar of the Church of SS. Peter and Paul in Antakalnis, Vilnius. The saint's remains were transferred here in 1953, when the Soviet authorities confiscated the original resting place, the Cathedral of Vilnius.

Miss Truskauskaitė had participated in the Saint Casimir cele­bration in Vilnius, and he scolded her for writing letters to prisoners, some of which lay undelivered on a desk in the office. Matulevičius tried to pressure Miss Truskauskaitė into writing a statement promising to mend her ways. The subject of the interrogation, explaining that according to her beliefs it was the duty of every Catholic to do so, refused to write any assurances.

Angered, the chekist warned Miss Truskauskaitė that he could throw her into the cellars and keep her there with the rats for three days. After two hours of interrogation, promising that there would be another meeting between them soon, in which "the tone of the conversation would be quite different," Chekist Matulevičius let Miss Truskauskaitė go.

Miss Vilė Masytė, of Kaunas, was sternly reprimanded by the administration of the Mažylis School of Medicine in Kaunas for her participation in the celebration of the Jubilee of Saint Casimir.

Antanas Žilinskas was interrogated and lectured by persons authorized by Sanauto Ūkis (the Rescue Vehicles Office) of Kaunas.

Jolanta Grebliauskaitė had a talk with representatives of the Kaunas Meat Combine.

The administration of the Kaunas Clinics expressed concern about Miss Giedrė Cibauskaitė and Miss Ilona Šupenytė.

The KGB and teachers were especially displeased by the poems recited at Saint Casimir's tomb, and especially the following:

The nation promises you, Saint Casimir

On the graves of the heroes and by the blood of the martyrs!

On all the fortress-hills we will kindle a new fire —

Lithuania will never submit to any oppressors!

The Nemunas was silent, constrained by the centuries

The Nemunas longed for freedom and for storms...

Let it burst into tears of torrential rain and wash away accumulated faults!

The nation promises you, Saint Casimir,

To stand beneath the cross and await the dawn.

In the spring of 1984, Utena Rayon church committee members were addressed by the representative of the Office for Religious Affairs. He tried to explain what great criminals the priests Alfonsas Svarinskas and Sigitas Tamkevičius were, and tried to incite committee members to take over the administration of parishes from the pastors.

The speaker was annoyed at statements by Father Paulius Rabikauskas over Vatican Radio concerning Saint Casimir. The lecturer was especially displeased by Father Rabikauskas' opinion of the article, "How Casimir Became a Saint", by Docent V. Lauraitis, a doctoral candidate in history Komjaunimo tiesa (Truth for Communist Youth), October 23, 1982. According to the latter, it is not the business of priests to criticize the work of historians, or to judge whether graduate degrees have been correctly accorded to propagators of atheism.

On March 4, 1984, in the church of Polekėlė, the Feast of Saint Casimir was being celebrated. Local authorities were concerned that the religious festival not become a solemn com­memoration of the Jubilee of Saint Casimir. The communal farm chairman sent a woman to the pastor of Polekėlė, Father Kęstutis Daknevičius, asking him not to have any procession or guest priests on the feast day. The pastor said that he would not down-grade the celebration of the feast, and that everything would be done by the book. On the feast day, a KGB car was parked in front of the church doors. Men in civilian garb watched the services, and especially the procession, and the young people participating in it.