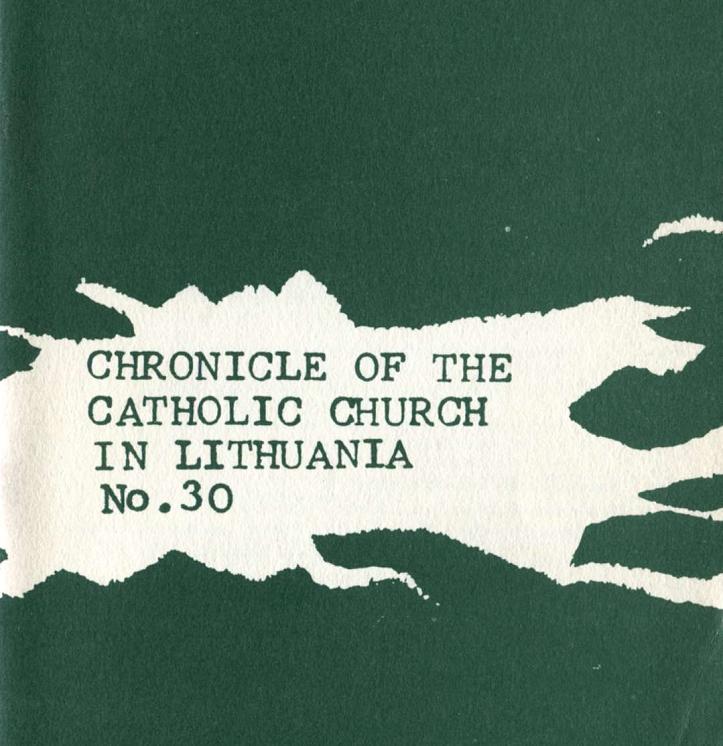 CHRONICLE OF THE CATHOLIC CHURCH IN LITHUANIA No. 30

A Translation of the Complete Lithuanian Original, LIETUVOS KATALIKŲ BAŽNYČIOS KRONIKA No. 30 Documenting the Struggle for Human Rights In Soviet-Occupied Lithuania Today

Soviets Fail to Stamp Out Self-Published Voices of Dissidents

Carbon copies are distributed secretly from one trusted friend to another. Some reach the West—usually months after they were prepared.

This is the dangerous world of the Soviet Union's under­ground press. The product is known here as samizdat, liter­ally, "self-published." Nowhere do these underground journals and manuscripts flourish as they do here in Cath­olic, intensely nationalistic Lithuania.

At last count, at least eight and possibly 10 regularly published samizdat journals were in circulation here. A ty­pical issue may run anywhere from 20 to 90 typewritten pages.

The oldest of them, the Chronicle of the Lithuanian Catholic Church, first appeared in the spring of 1972. Since then 34 issues of the journal have appeared—an average of one about every 10 weeks.

Such journals are, of course, illegal in the Soviet Union, where only the government is supposed to have the final word on what is and what is not to be published. But in Li­thuania the authorities have been unable or unwilling to stamp out the underground press.

The KGB, or Soviet secret police, has arrested scores of people here over the last few years for helping to publish or circulate the samizdat journals. According to some Li­thuanian sources, the KGB has even tried to publish its own samizdat brochure in an attempt to discredit the Chronicle and other underground journals.

But despite the KGB's efforts the number of such publi­cations has actually increased.

What makes the underground Lithuaman journals spe­cial is their more or less regular publication as well as their political content, centering on nationalist and religious themes.

The Chronicle, for example, concentrates on news of re­ligious repression in the Lithuanian Republic. The last issue to reach the West reported a new government cam­paign for the "atheization" and "denationalization" of Li­thuania's young, described protest activities by Lithuanian Catholics, and surveyed allged discrimination against be­lievers in a section titled "News From the Dioceses."

Another long-running journal called Ausra (The Dawn) is more nationalistic. It disclaims political goals such as "fomenting a revolution or restoring the capitalistic sys­tem." However, one recent issue reported the existence of a manifesto addressed to governments and the United Na­tions calling for a referendum that would allow the non-Russian Soviet republics "to make their own decision" about seceding from the Soviet Union and forming "inde­pendent, peaceful states."

The lead article in the first, issue of Ausra, dated Octo­ber, 1975, complained that "the czarist occupation has been replaced by a Soviet one. The existence of the Lithuanian nation is again in danger. ... In a manner both planned and disguised, Lithuania is being spiritually undermined and physically destroyed."

The journal is named after an influential monthly publi­cation of a 19th century Lithuanian national movement opposed to the czar. Eleven issues of the new Ausra have reached the West, the latest dated May, 1978.

The Road of Truth first appeared in January, 1977, and eight issues are known to have been circulated. It, too, takes its name from an earlier journal—one published from 1925 to 1940 during the years of Lithuanian independence. It aims at the clergy, urging priests to resist state interfer­ence with their pastoral work, even publishing sample ser­mons.

"God and Country, begun in 1976, seeks to defend reli­gion in Lithuania and to wage "a struggle against the oc­cupying power with spiritual weapons." Articles in the six issues known to have been published to date have defend­ed religious belief against the government's atheistic pro­paganda.

Other Lithuanian samizadat journals include The Sor­rowing Christ, Little Dawn, The Voice of Lithuania, and TheBell. Another, called Herald of Liberty, was reported­ly put out of business by the KGB last year, but Lithuanian dissidents report that a new journal, called Perspectives, is now in circulation.

The official Soviet attitude toward the Lithuanian un­derground press is indicated by what are alleged to be Li­thuanian Supreme Court documents obtained by the Chro­nicle. The documents, according to the journal, describe it as printing "tendentiously selected and clearly slanderous materials that give a distorted view of the U.S.S.R.'s inter­nal policies towards the Catholic Church in Lithuania. An attempt is made to suggest the existence of a so-called suppression of freedom of conscience as well as of the per­secution of believers and thus to incite the people against Soviet power. The compilations of the Chronicle were transmitted to the antigovernment bourgeois emigration center abroad, which have used the slanderous materials in their destructive activity against the U.S.S.R."

Among those who have been arrested or otherwise pun­ished for their association with the underground journals is Vladas Lapienis, a 73-year-old pensioner. He was sen­tenced in July, 1977, to three years in prison camps for "purveying slanderous literature." Copies of both the Chronicle and Ausra were confiscated, along with his typewriter, when he was arrested.

Sergei Kovalev, a Russian biologist, was sentenced to seven years in late 1975 for helping publish the Chronicle.

Petras Razukas, a student at the Kaunas Catholic semin­ary, was expelled last year after police found eight copies of The Sorrowing Christ in his room.

A KGB interrogator in the city of Prienai reportedly said that it, will be the Chronicle's fault if several thousand Li­thuanians suffer reprisals.

One reason for official concern is that, unlike in Moscow where only a tiny minority pays much attention to dis­sidents, a large number of Lithuanians in many walks of life apparently read the underground journals. A wave of KGB house searches, interrogations and arrests in Kaunas in the spring of 1977, for example, touched workers, doc­tors, high school and university students, and teachers, among others.

Asked why the authorities have not been able to stamp out the underground press here, one Vilnius man replied, i "There are so many people working on (the samizdat journals) that while they can get a few, they can't shut them down completely."                              "

One of the KGB's alleged efforts at getting into the sa­mizdat business seemed rather blatant.

A typescript pamphlet circulated among seminarians at Kaunas late in 1977 accused the Chronicle of destroying the unity of the church, weakening people's trust in priests and bishops and insulting the prestige of the Soviet Union.

In addition to its decidedly pro-Soviet slant, there was another indication that the brochure might have been a KGB ruse.

It was double spaced—a luxury that the hard-pressed authentic samizdat publications cannot afford. 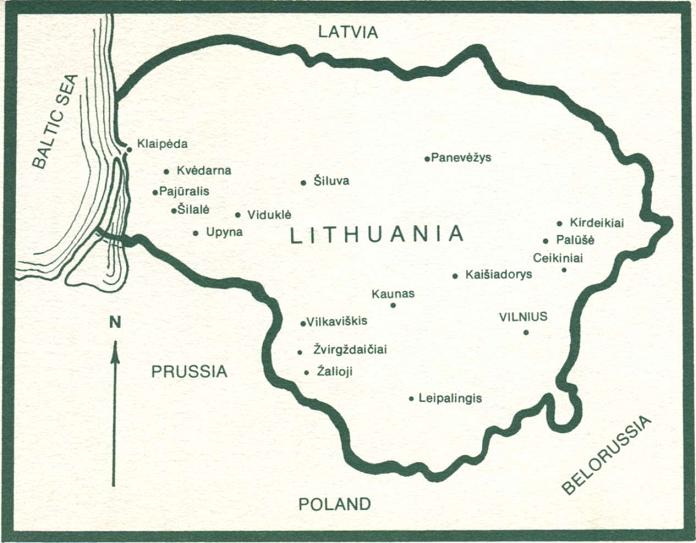 Places mentioned in the Chronicle of the Catholic Church in Lithuania No. 30