From a letter of Father Alfonsas Svarinskas: ...Today is the second Sunday of holy Lent. It is the eve of the Feast of Saint Casimir, so dear to us Lithuanians.

It is early morning. I have finished praying, and now I wish to write to you..

So far, I am in general good health, physically and spiritually, better than my age — sixty — would indicate. Let us believe firmly that God will help us. There is much I would like to tell you, but the paper won't allow it. (Prison censors won't pass it — Ed. Note.)

We must make every effort to meet in heaven. On earth, after all, everything goes by quickly. I have had the grippe for a whole week, and have not been to work. I am still coughing, but I hope that the spring sunshine will cure that.

During holy Lent, I am trying to make a retreat. I am praying more, performing at least small voluntary acts of self - denial — all this for the success of the retreat, that all of us might mature spiritually, be reborn spiritually in preparation for Easter. Only in my soul shall I hear the joyous Easter "Alleluia ", but in my heart there shall be no sadness or dejection. On the contrary, I know that I am doing His will, and that is the most important thing for me.

I extend Easter greetings to just everyone, and to those places where I worked, however long. I wish everyone much spiritual joy, mutual peace and I say good-bye to everyone... I pray for everyone, and for my homeland.

A telegram to Father   Alfonsas Svarinskas in camp   on the occasion of his sixtieth birthday:

"Sunday. Freezing in Viduklė, -14C. Bright sun. Church full of people. Everyone's spirits good. With the boss (the pastor — Ed. Note) leading, everyone prayed to the Almighty and greeted you, our spiritual Father on your honorable sixtieth birthday. Once again, everyone, all people of good will greet you, missing you and kiss you many times, wishing you God's blessing and the abundant protection oi Mary! Your sister Janina and godson Vytautas."

A storm breaks only branches and knocks down only rotten trees, but the oaks remain standing. Even though hurt, even with their bark torn, still stubborn, having withstood the stormy winds, you, our revered Father Alfonsas, are only sixty. So in the name of our fellow countrymen, we wish that you rear1 your hundredth jubilee, and we trust that in our hearts, there wil. be always room for you.

The parting of the great ways separeated us. Whom are you blessing now with your hand? Will you remain long beyond the hills and forests. A severed branch of Mary's land?

Who will tell us the truth and who will comfort us?

I heard a prayer floating up to heaven.

After breaking through the ice and prison camp gates.

We remember you and hear your voice.

Just as before, you are in our midst,

When the hearts of the oppressed call for God—

Mary's land, a bright hymn for you. 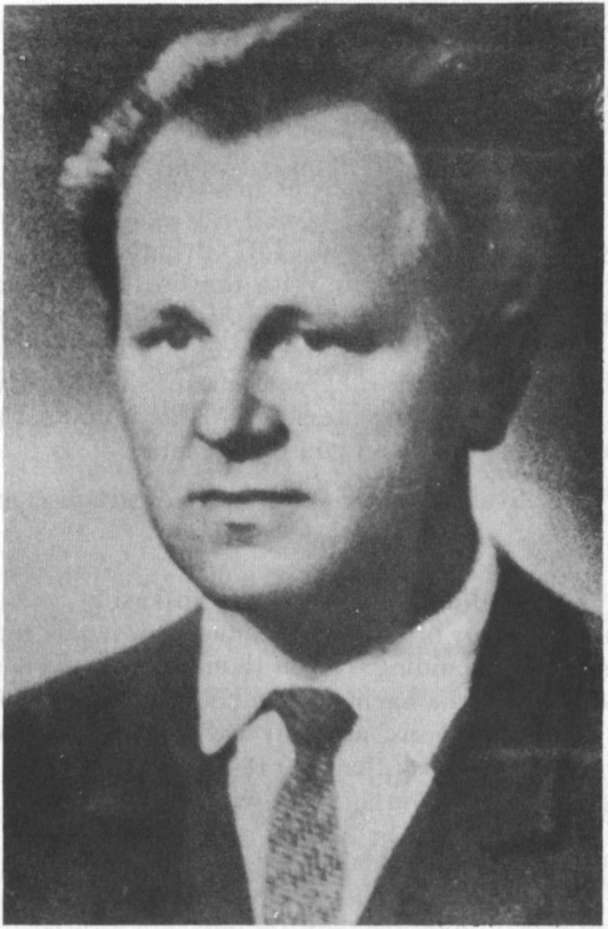 On this holy evening of recollection, recalling you with gratitude, I am with you in spirit., Once again, it's Christinas! Once again, a new year, this time, 1985. What it brings you and us, time will tell. Let us trust in God. He will not let us down.

May God's blessing and His grace always be with you. Yours, Vytautas

I do not ask anyone for support, but people are always turning up: Lo and behold, word that there's a package in the mail. I write to everyone, telling them not to send anything, that I don't need it, but they do not listen to me. You are one of them. What can I do? I can only thank you and remind you once again that you do not have to send me anything. After all, there are many who need the help much more! I can still get about, and I am even able to earn a little. In a word, at the present time I am neither hungry nor cold, nor the kind of invalid who cannot take care of himself. I keep thinking that others have it worse, and this helps me to bear all kinds of-troubles. Meat products are worst for the stomach, not because they are meat, but because I have no teeth (perhaps not so much on account of old age, as on account of gum disease.) It is three or four years since I've lost every one of my uppers and of the lowers, there is only one bridge left. This is no small problem.

True in Igrim there is not only a clinic, but also a hospital where there is even a dental office, but... It's my good fortune that I have not fallen seriously ill. That would be (mite tragic, since unlike others, I could not leave here and go for treatment.

... What I do not have, no one can send me: The most elementary thing — air from the homeland. Essentially, a climate such as that of Igrim affects me quite adversely, making me tired and listless, and it aggravates all of my earlier disabilities .. Why talk about all sorts of little things? More important is our homeland. Everything else is nothing.

On December 29, 1984, Jonas Sadūnas' suspended sentence ended with his being sent off to forced labor. According to the LSSR Criminal Code, Par. 58 Id, 2p, he is supposed to be treated as one who has not been convicted. But in practice, everything is different.

When Jonas Sadūnas was arranging the documents for his release in the s peck om e n d a n t u r a of Jonava, one administrator told him that the KGB was trying hard to have a new criminal case brought against him, but they had been unsuccessful, because Sadūnas was such a great worker. The Directress of the Third Bureau, Captain Irena Krainova, bidding Sadūnas farewell, said, "Out there, it's going to he much tougher than here with us, at the speckomendantūra!" 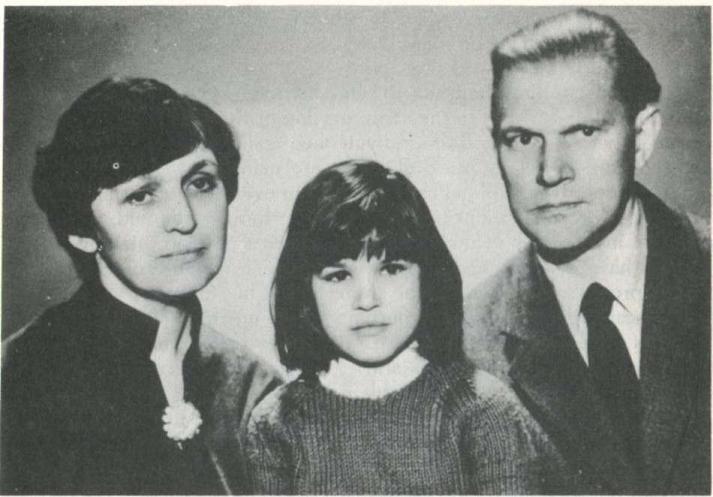 The first difficulties showed up during registration. On January 13, 1985, Chairman Zupšnys of Cooperative 9-9 filled out the required forms for registration. Jonas Sadūnas wife, Marytė, wrote a statement to the chief of the Internal Passport Desk, stating that she agreed to accept her husband. That same day the Military Commissariat re­turned his military record. On January 7, a passport official,, Mrs. Eichkov, stated that for registration, they needed not only the passport of his wife and his sister Nijolė, but also birth certificates for Jonas Sadūnas and Nijolė Sadūnaitė. The Passport Desk required three signatures from Nijolė Sadūnaitė. The Clerks kept missing something: Either the Chairman of the communal farm had filled out the regis­tration form wrong, or some signature was missing. The passport clerk rejected Form No. 15 as it was filled out, and bringing a new one, filled it out in her own hand; demanding that it also bear the signature of Miss Sadūnaitė. Sadūnas accidentally ruined the Form No. 15, issued by the passport clerk. Obtaining another one, he filled it out in his own hand. When he took the completed and signed documents to the passport section, Mrs. Bichkov began shouting because the form had not been filled out in her hand, and threatened not to accept the documents. However, after disappearing somewhere for consultation, she calmly accepted the documents, but without returning Miss Sadūnaitė's passport, demanding that Nijolė herself come to the passport section, bringing with her new photographs to be attached to her passport.

Sadūnas was registered in three weeks.

It was the same with registration for employment. No one will employ one who is unregistered. On January 25, at 10:30 PM, Senior Lieutenant Tokranov of the militia came to the Sadūnas' apartment, and without even a greeting, excoriated Sadūnas for not being employ­ed. Jonas Sadūnas calmly answered that, according to the law, he had three months to obtain employment. The militiaman could not contain himself, and began shouting, "We'll show you what it means not to work!...''

When he began looking for employment, it became clear that the way to working in his specialty was blocked. In front of Post Office No. 43 hung an announcement that there was a shortage of mailmen. Sadūnas applied to the postmistress. She took his papers and asked him to stop by in two days. When Sadūnas went to see the postmistress at the appointed time, she, seeing him, became frightened and told him that she could not take him on because, "There are no vacancies," but that same evening, the Vilnius Evening News announced that the post office needed mailmen. Finally Sadūnas applied to the city employment bureau, but again, it was the same story! Wherever he turned, he obtained no employment. Moreover, the Sadūnas' are not allowed to receive letters from abroad. From 1981 until 1985, they did not receive a single letter from friends abroad.

Officials on various occasions try to find out where Nijolė

Sadūnaitė is. At the time of his registration Jonas Sadūnas, asked

about his sister, replied that his sister was at home. The officials remained silent.