TEMPTATION WHICH WE MUST REJECT

".. .the devil .showed him in a moment of time all the kingdoms of the world and said to him, "I will give you all this power and the glory of all these kingdoms, for it has been committed to me and I give it to anyone I choose. Worship me then and it shall be yours' " (Luke 4,5-7)

If the devil dared to tempt Christ, it is no wonder that we too have to undergo the burden of temptations and trials. It is not only the ordinary laity who are tempted; but so are shepherds of souls and entire church communities.

The dark night of trials and deceitful temptations is being experi­enced today also by the Church of Lithuania, its leaders and rank-and-file children of the Church. It is not easy to remain faithful to Christ and the spirit of His Gospel.

Catholic Lithuania sympathizes with the Catholics of Poland and the whole nation, shocked by the evil murder of Father Jerzy Popieluszko. The Holy Father is right in saying that such events clearly testify how difficult it is today to be a Polish Catholic.

It is not easy to be a Catholic Lithuanian either. To be a living branch of the Catholic Church in Lithuania today is even more dif­ficult. This is not just a fact which becomes clear only in the light of events — persecutions — in the recent past; it is a painful and difficult fact today. Even though the government atheists are trying to gloss over the situation with their promises, enticements and concessions in secondary matters, nevertheless in fact, they are trying by increas­ingly deceitful means, to force their way into the internal life ofthe Church, and to wreck it from within. This is much more terrible than open warfare.

On January 17, 1985, in the Drama Theater of Vilnius, a commem­oration of the 150th birthday of Bishop Antanas Baranauskas was being solemnly celebrated. Representatives of the atheistic govern­ment participated. It was perhaps the most beauatiful example of cooperation between Church and state! Commemorated was the Lithuanian poet, a bishop, who fought courageously in the last century against restrictions by the Russian Czar on Catholic activities; a bishop whom the government of those days punished just for organizing Catholic processions in Catholic Lithuania even outside the church­yard gates.

And that very day, in that same City of Vilnius, because they had gone on All Saints' Day with a crowd of the faithful in orderly procession from the church to the cemetery to pray for the deceased, standing trial were Father Jonas Kastytis Matulionis and the Catholic youth Romas Žemaitis. In similar situations, the Czarist government used to content itself with a monetary fine, hut today the penalty for that is two or three years in prison.

The new Commissioner for Religious Affairs, Konstantui Khar-chev, on a visit to Lithuania, promised the bishops that he would increase the number of students in the seminary to one hundred fifty, if the bishops promised to be "good" to the atheistic government — by not ordaining to the priesthood those young men whom the KGB failed to recruit to serve atheistic ends.

In the seminary, the work of recruitment goes on full tilt: almost every day one of the seminarians is summoned to the military commis­sariat or the like where KGB officials — tempters — await them. This terrible moral coercion is very well revealed in the open letter of young Father Rokas Puzonas to the KGB, currently circulating in Lithuania, about how he had been recruited by them.

The government atheists are promising to increase the quota of candidates to the seminary, while with all their might they are waging a war so that such candidates do not show up; they are spreading stronger atheistic propaganda in the schools and persecuting any ac­tivity among Catholic youth. Hardly has a young man registered for military service when the demand is made to note on the form whether he is a believer or not. Moreover, the priests working among children and youth are being condemned and ridiculed, out of the mouths of "loyal", "moderate" priests.

The new Commissioner of the USSR Council for Religious Affairs, Kharchev, visiting the bishops of Lithuania, constantly praised the Russians who have allegedly done much good, and he expressed concern lest the kind of things which occurred in Poland occur in Lithuania.

The Peasants' Netvspaper (Valstiečiu laikraštis) for January 26, 1985, published an article by J. Tikhonevich, a doctoral candidate in philosophy, entitled the "Catholic Church in Poland'. In it, he writes among other things, "In the Peoples' Republic of Poland, there are about a hundred periodicals, representing various currents of Catholi­cism. Besides these, there are about twenty bulletins and proceedings published by Catholic scientific societies, commuinity organizations and scientific and educational agencies. . . The government of the Peoples' Republic of Poland has issued permits for the construction 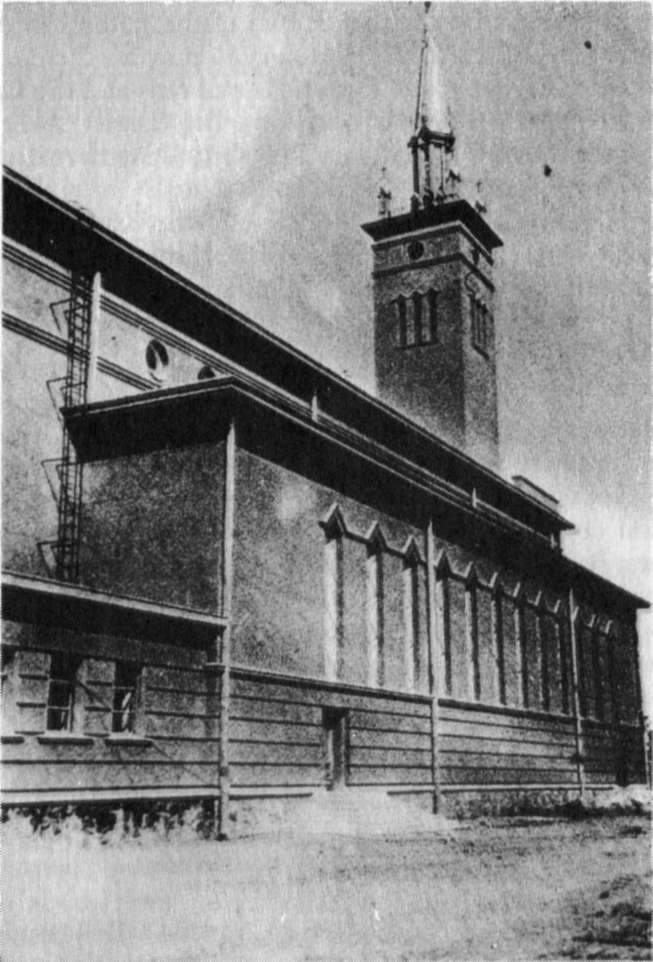 The church of Mary, Queen of Peace in Klaipeda, shortly after it was completed, before it was confis­cated and converted into a philharmonic hall.

of six hundred new churches and the expansion of more than three hundred churches ..." 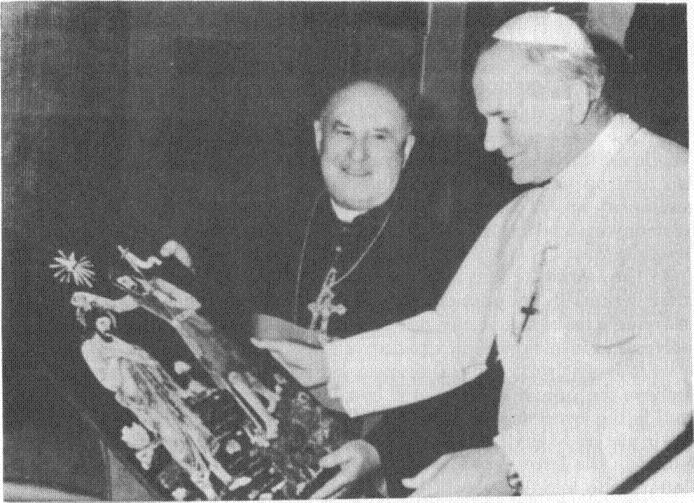 Archbishop Liudvikas Povilonis, Apostolic Administrator of the Archdiocese of Kaunas and the Diocese of Vilkaviškis, presenting Pope John II with a gift from Lithuania on October 24, 1980, in Rome.

Other churches have met with the same fate: the church in Game (Rayon of Tauragė) has not been rebuilt; the faithful of Batakai are using the belfry — their church lias also been burned down. When they built themselves an extension to the little belfry, a tarpaulin shelter from the rain, officials ordered the "structure" demolished forthwith.

Why talk about a Catholic press or periodical publications or bulletins when the priests of Lithuania receive even liturgical calen­dars several months late?

The atheistic government allows the bishops of Lithuania to go to Rome from time to time to visit the Holy Father, but as the people notice, for each such visit, the Church of Lithuania must pay dearly with the arrest of another priest.

Even in Rome, our bishops are not left without chaperones. An official of the Council for Religious Affairs, the notorious Juozėnas, going to Rome the same time as the bishop, tells the bishop what to say and how to say it.

The new Commissioner of the USSR Council for Religious Affairs told the bishops of Lithuania of plans to arrest a few more priests, so that Lithuania would not follow the example of Poland.

One more project of the atheists is to see that "loyal" priests condemn the zealous bishops and priests of Lithuania. And priests do turn up who dare publicly in sermons and retreats to ridicule exemplary priests, and especially priest-prisoners. The vile campaign of anonymous letters against Bishop Julijonas Steponavičius of Vilnius continues.

The Chronicle sees no reason for replying to such letters, since their writers by exaggerated panegyrics spun out of thin air and by extremely naive and absurd demeaning of others only demean them­selves and insult those they praise.

It is just regrettable that even in Rome, priests turn up who believe the rumors disseminated by anonymous letters in Lithuania, and in the "wisdom" propagated by the KGB, and say that they form their picture of the true situation in Lithuania from information pro­vided in the letters of "loyal" men. We know from experience that letters with information which is not useful to the government never get abroad. What then can one write in a letter about the true situation in Lithuania?

Catholic Lithuania always listens with great attention to the broadcasts of Vatican Radio, but it is unfortunate that there, too, disinformation crops up. For example, it appears that even Diplomat Lozoraitis, highly respected in Lithuania, has been misled. The Chronicle has never said that Lithuania should be without bishops; the Chronicle simply has been and still is concerned lest, on account of disinformation, unsuitable candidates, who would do great harm to the Catholic Church in Lithuania, become bishops,

We can only pray that the deceitful tactics of the atheists would not mislead those who wish most sincerely to help the suffering Church in Lithuania.