IN THE SOVIET REPUBLICS

In the western regions of Ukraine, the activity of the Catholic (Uniate) Church has increased. Compared to former years, the faithful, adults as well as children, are going to church increasingly often. At the same time, the persecu­tion of the faithful by the atheistic government has increased. This is evidenced by the terrorizing of priests and the numerous fires at functioning and non­functioning churches. Here are a few examples:

In May, 1987, for offering Mass, fines were imposed on Fathers Ivan Senkiw (Son of Josef), Father Vasilyk and Taras Senkiw. Confiscated from them were bibles, all liturgical vestments and church vessels (chalice, paten, etc.)

In June, they fined young Father Senkiw four times, up to 100 rubles. The KGB warned him that these were the last fines; that in the future, arrest would follow. Two days leter, a search followed. From Father Senkiw, they con­fiscated a newly acquired bible, liturgical vestments, a chalice and crucifix, and the priest himself they interrogated.

In the Cities of Buchach and Borchshev, in the Region of Ternopil, where Uniates assemble to pray, they are regularly dispersed by an operative group of auxiliary police on alert. The auxiliaries act unacceptably in the chur­ches, relentlessly vandalizing them.

On the night of April 13, 1987, the church in the Village of Yasenij, Rayon of Rozhniatovsk, Region of Ivan-Frank, was set afire and burned down. The determination of the faithful to rebuild the church was quite unexpected. Heedless of various obstacles posed by the atheists and the atheistic govern­ment, by their own efforts, out of their own materials and resources, they had, by Easter - a period of one week - erected on that same spot another house of prayer!

In the spring of 1987, the church functioning in the village of Piniv, Rayon of Nadvorno, Region of Ivan-Frank, was burned down. The faithful, without government permission, rebuilt the house of worship in a comparative­ly short time.

One night in March 1987, the suppressed Catholic-Uniate Church in the Village of Goshev, Rayon of Dolinsk, Region of Ivan-Frank, was set afire and burned down.

On a hill in the aforesaid Village of Goshev, a renowned Catholic monastery, possessing great architectural value, has just about gone to wrack and ruin. The monastery had been converted into an orphanage. Children had been housed in the monks' cells and the church itself had been xl Ukraine turned into a storage house for the orphanage. The faithful of Ukraine visit this shrine in great numbers, even though the militia try by all means possible to dis­perse the pilgrims.

In the fall of 1986, with the militia and Party activists from the Rayon and the village participating, the government suppressed Catholic Church in the Village of Vyshkov, Rayon of Dolinsk, Region of Ivan-Frank, was bulldozed. The Village of Vyshkov is high up in the Carpathians, and borders on the Region of Transcarpathia. Workers from Czechoslovakia, laying a natural gas pipeline, refused to provide a technician for the demolition of the church. They con­demned the Ukrainians for destroying their own architectural monuments.

In 1985, the church in the Village of Kozmach, Rayon of Kasovskij, Region of Ivan-Frank, was burned down. According to legend, Alexei Dovbush, the Ukrainian freedom-fighter killed in 1745, contributed greatly to the erec­tion of this church.

In 1985, during the demolition of the suppressed church in the Village of Trushivka, Rayon of Kalusk, Region of Ivan-Frank, before a crowd of on­lookers who tried to prevent the destruction of the shrine, troops summoned to the village used tear-gas to disperse the crowds. Usually, to assist the demoli­tion team, a reinforced detail of militia with dogs, militia trainees and a unit of the local garrison are called out.

In 1980, in Ukraine, government atheists tore down the last wayside crosses at edge of villages and homesteads of the faithful. They knocked down and demolished statues having ties to historical events or commemorating them, such as the abolition of serfdom in 1848.

Recently in many villages, the faithful, in an effort to guard their shrines from arsonists, have been taking turns on guard.

On July 26,1987, the celebration of the 600th anniversary of the intro­duction of Christianity into Lithuania took place in in Pelesa (Byelorussia, Varenov-Rayon). The church in Pelesa is closed and has been converted into a warehouse. Lacking a church, the people of Pelesa gather in the nearby cemetery to pray. In 1985, in order to have shelter for public worship, the faith­ful erected a chapel of boards in the cemetery, but the chapel had to be demolished.

In preparation for the celebration of the 600th anniversary of Chris­tianity in Lithuania, the faithful erected in the cemetery an open-sided tent where they prepared an altar with a picture of Christ carrying the cross. Near the cross an image of the Blessed Archbishop Jurgis Matulaitis was displayed.

The celebration took place at noon, July 26. Four priests and many of the faithful came from Lithuania to the celebration. Holy Mass was con-celebrated by three priests. The services were held and the sermon delivered in Lithuania, the gospel and a second sermon were delivered in Polish; in the area of Pelesa, there are people who no longer speak Lithuanian. Before and during 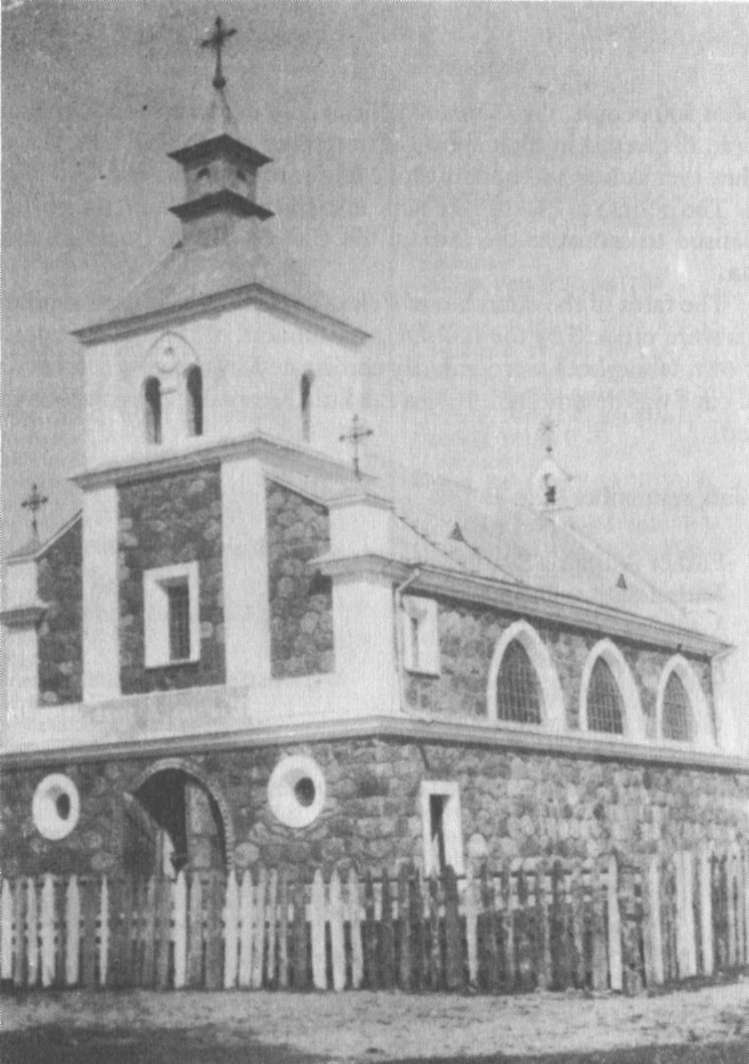 the services, Lithuanian hymns were sung. Many local people went to Confes­sion and Communion. At the end of the services, a jubilee cross was blessed and erected in the cemetery, and the Baptismal promises were renewed.

The priests and guests who came distributed to the people of Pelesa prayer cards specially prepared for the jubilee. Before dispersing, the Lithuanians sang Maironis' "Lietuva Brangi" ("Beloved Lithuania"), and Vincas Kudirkas's "Lietuva Tėvynė Mūsų," ("Lithuania, Our Native Land" - national an­them of independent Lithuania - Trans. Note). Participating in the celebration were about 500 people. Government officials did not interfere. After services, the people dispersed in high spirits, determined to demand that the church which they themselves had built of stone be returned to them.

The people of Pelesa take hope also from the fact that the government has promised to return to the faithful the Church of the Queen of Peace in Klaipeda.

The fates of the churches of Pelesa and of Klaipeda are similar. Both churches were erected by the faithful, parishioners, at their own expense and by their own labor; both were unjustly confiscated by the government and the belfry of each was demolished. Pelesa is a little Klaipeda. The injustice must be remedied.

and others bear the chains of slavery, that you might live and believe in freedom.